This photograph isn't mine. It is one taken by Michael J. Totten,
who has a set of good Bucharest photos, so best go there.


Saturday morning: brilliant cold sunshine. I was supposed to be interviewed by a magazine at 12:00 but the reporter had an illness in her family so Anca Fronescu took me for a walk around the older parts of Bucharest. It was about an hour and half, and after the austere grandiosities of the Ceausescu era and the odd piece of 19th century Baroquery left standing after his ravages it was very good to pass down streets that felt human scale but still allowed for the ambitions of the imagination in various modes. Domes, arches, pediments, columns, Orthodox churches, theatres, old cafes and restaurants, bookshops, alleys. It was Anca's family district so we went down side-streets, dropping into buildings along the way. It was very quiet for a Saturday morning, clean, intimate.

We arrived a little late for lunch at a cellar retaurant with the other writers and organisers.  Daniel Boyacioglu, Mátyás and I talked politics, Daniel, who is part Syrian, part Turkish and part Swedish, ever more passionately. Marius Chivu was remembering the time at Neptun when we went on a boating trip in the Danube Delta and Paul Bailey had a heart attack. (That was the trip I wrote The Black Sea Sonnets about, including a poem about the hospital at Constanza) I suddenly remembered, quite vividly, Paul talking to Marius and a girl reporter on the boat, in the intense sunlight, drinking wine and black coffee. Later that night we noticed a wedding, were invited in and danced.

We walked back to the hotel then at 4pm Nadine Vladescu came to do an interview. We talked away with considerable energy for over an hour and a half and I just had time to pick up my coat before we were driven off - by Daniel - to the venue at the Clubul Taranului. 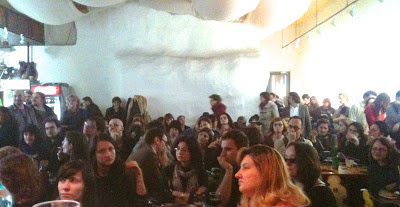 It was, if anything, even more crowded than yesterday, well over a hundred people. I am sure it wasn't because of me. more likely because of Mircea Dinescu who was a very well known poet before the fall of Ceausescu, was filmed in the TV studios during the siege in 1989, underwent an eclipse, then became a popular figure on television himself and reasserted himself as a poet.

who is a very well-known slam- and rap-artist as well as a poet, not to forget, a stylish dresser. Or it might have been Kei Miller, who was snowbound in Glasgow and appeared to read a few poems of Skype. And perhaps Marius Chivu who is at least known as Romanian poet. In any case the place was more than packed and, again, generally, very young.

I read first, about 10 minutes as asked, then Dinescu held forth for about 25, chiefly talking before rattling off about six poems to general amusement. Daniel had a couple of long poems translated by Marius then performed a half rap-half poem with great style to great enthusiasm. Kei too was very welcomed, and lastly Marius read a few quieter poems, though I had no translation. I felt deeply unspectacular in all this but didn't care much. I do what I do and I try to do it well. It seemed OK.

Then we had a series of questions including one about the 'crisis' in poetry. I said there wasn't a crisis in poetry as it has always looked after itself and always would. There may be crises in publishing but not for poetry particularly. It wasn't the desired answer perhaps. Dinescu made another long speech. Daniel talked about poets' obligation to their audience. I said I never thought of audiences but of a sum of individuals, a crowd being one plus one plus one etc. I am sure Daniel is right for what he does, I hope I am right for what I do.  I appreciate what he does: I have no idea what he thinks of what I do. As I said, I wasn't sure what I was doing in this context except that Bogdan, the organiser, has, he says, a strong passion for my poetry, having heard it first at UEA. This was the first of the five Bucharest festivals so far with a poetry night, so it would have been very satisfying to see it so full. 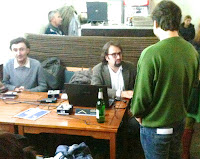 That's Bogdan, with the beard, on the right and the quiet very thin man who asked me for book title on Hungary 1956 next to him.

Afterwards a drink, some pretzels and goodbye, including to Nadine, below. (I look rather too vampirical in the picture, maybe it's the physical closeness to Transylvania and my mother's roots that brings this out.) 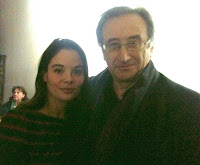 Lastly, by taxi, to Denisa Comanescu and Nicolae Prelipceanu's. They are both poets and editors. The  ride is long in a very wet traffic queue that hardly moves. It is two days past Nicolae's name day and a small company of writers and friends are gathered to celebrate. It is just like an eighties flat with eighties company - warm, relaxed, everyone heading for a smoke now and then. I talk in English to those who can, and feel sad to divert people from their native Romanian. But they are very kind and welcoming. I don't know Nicolae's poetry but do know Denisa's in translation and have known it for many years now. She is outstandingly good. She is a poet in the same sense I am.  Perhaps we are all poets primarily of our periods, in some sense. It's just that I am very restless and must always be experimenting. She gives me an enormous slice of cake I can't eat. I sip at a pálinka.  We talk a little of our lives in terms of work, and of friends, some no longer such close friends it seems. Nicolae is a generous and wise man. Denisa remains very girlish. It is lovely, just lovely. Then, back in another taxi, the traffic quieter, the rain still falling.

I am enormously grateful to be invited and so well looked after by Bogdan-Alexandru Stanescu, Oana Boca, Ioana Gruenwald and Vasile Ernu. Thank you. And thank you again.

Just one brief note before anyone else notes it. The festival writers were all male. I think that will change.

'A crisis in poetry' is an odd concept. I am wondering what might create that? A world shortage of ink, paper, computers? Or a lack of readers? Always people talk of the audience. As though writing cannot exist unless it is read. My writing is rarely read. I have written with one person in mind but more often none. Does that mean my writing is in crisis? Hard to care. Any writer surely writes because of a need to express their world through words in whatever format enables that expression. It just is. Like breathing.

A crisis in poetry? Good grief, such youthful seriosity. Sounds like you handled it admirably.

I got a laugh from your 'vampirical' picture. Yes, remove the specs, throw on a cloak (cue some howling offstage) and you could own those lines:

'Listen to them, children of the night, what music they make!'

Muse (and Mark), I completely agree with you. I do think there is a need to be read or at least to be available to be read but there is no particular number of readers required. Who was it who said I have three real readers and that will do? Somebody quite famous. I can't remember now.

Really the question was about commerce and popularity. Poetry was popular and important in Romania before 1989 and it is less so now - but that is the story everywhere. Poetry had a political role then - it has less of one now.

People with material hunger need spiritual sustenance and poetry provides them with it. It does so because it is not easily susceptible to manipulation - it retains a strong element of private-level truth. People without shoes need a lot of poetry: people with an excess of shoes need less, said a great Hungarian poet to me in 1990.

The Swedish guy is popular and talks of an audience. I don't expect to be,so I talk of individual readers. Of course I myst avoid hypocrisy and admit I welcomes new readers and it's nice to sell books, but it's not the guiding principle.

And in any case in terms of popularity and sales in terms of publishing poetry is having no worse a crisis than novels.

Simply to say I was very interested to read your post. I write from Suffolk as an External Collaborator for Orizont Literar Contemporan, which is Bucharest-based, and edited by Daniel Dragomirescu. The language students at the University of Bucharest undertake much of the translation work (Romanian, English, Spanish ...), that enables the journal to be a multiligual one.

Thank you, Caroline. I imagine you might know Lidia Vianu...