That interview about the relationship between the beating of the heart and poetry was rather fascinating. The interviewer was a man who suffered from arrhythmia so my own quad op became part of the conversation. We started from a recent radio programme in which a choirmaster suggested that the various heart-rates of individual members of the choir begin to synchronise as they sing.
The broad course of the conversation was - very briefly -something like this:

The child picks up the mother's heartbeat while still in the womb. Soon after it is born it is held in its parents' arms and gently rocked for a heartbeat-like assurance so it may sleep in security.The child hears lullabies for much the same reason. Both rocking and singing provide the kind of regularity you find in poetic metre which is - so the suggestion goes - an echo of the heart.

However, once the child is more aware, we start playing with it, moving our fingers round its palm, quietly assuring it with the mild tickling and chanting of 'Round and round the garden' then running up its arm with the faster, rising voice and movement of 'tickle him/her under there'. So the regularity breaks and causes laughter and pleasure.

Though a regular pulse is reassuring to the extent that we hardly notice it, we are pleased and excited when the heart 'skips a beat'. We love and seek that skip. It takes us out of ourselves, our regularity, while reminding us of it by way of contrast.

I was thinking of two particular examples one from Tennyson the other from Dickinson. I will just refer to the Tennyson here. Here is a passage is from Tennyson's 'In Memoriam'

...A hand that can be clasp’d no more—
Behold me, for I cannot sleep,
And like a guilty thing I creep
At earliest morning to the door.

He is not here; but far away
The noise of life begins again,
And ghastly thro’ the drizzling rain
On the bald street breaks the blank day.

The tempo of the poem breaks into a run in '...ghastly thro' the drizzling...', which, in its turn, offers us some slight preparation for the astonishing last line that beats down on us, both rhythmically and in its alliteration, in an avalanche of heavy masonry. The power of feeling is realised in us physically. Our hearts, brains and lungs experience something of what Tennyson experiences through language and we are moved and exhilarated by it.

We then talked about Dickinson's use of breath and break. The argument was that we want the exhilarating, explosive force of broken rhythm and broken heart beat, but we don't want it all the time. That is true for excitement in life too. We want to be shocked, frightened, astonished, etc within the governance of some form.

But this form - and this was the last point in our discussion - cannot afford to become too comforting or relaxing. It has to retain tension even within the regular beating of its heart. It can't nod off. Hence the importance of vowel-play, consonant-play, flexible caesuras, sudden shifts of imagery and other learned yet intuitive devices. It is the ghosts of form, its hauntings, that we desire, even in poems that do not appear to offer a set metre. The ghost of the set metre, which is itself the heart at tension, is constantly shadowing us, or should be.

Should we therefore enjoy arrhythmia, asked the interviewer, because it is clear that we don't and that it is dangerous?

The reason we don't, I suggest, is because there is no governance. Verse offers the possibility of governance. But it is governance at tension: it assures with a not quite steady hand. 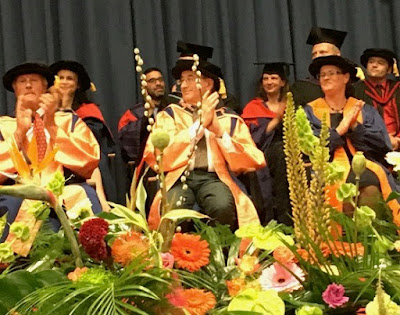