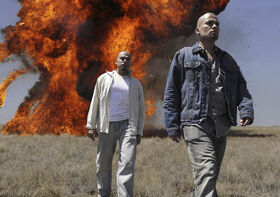 To develop a line from yesterday's blog about myth in Breaking Bad - and in narrative generally - I want to think a little about a major aspect of myth, which is the degree to which it is embedded in realism or moves clear of it.

On what terrain do the levels of reality and myth interact? Asking the question the thought of phantoms comes to mind. We talk of chasing phantoms that are there yet not there, that are illusions yet we register them. Given a realistic narrative (by which I mean one that is not obviously fantasy) each character is both figure and phantom at once. I think of phantom rather than demon because while demons exist in this particular fiction not every character is a demon.

Even the Mexican thugs who are primarily demons are phantoms of a sort. I called them demons because their function is straightforwardly demonic. They exist for one pupose only, to inflict cruelty and death. Their motivation is not primarily money: it is in excess of that. They are, in story terms, a single, mountain-sized projection that provokes action but also settles as image in Walter's head and therefore in our own heads. Even when they are suddenly blown away they survive as presences.We cannot quite forget them. Their demonic lives continue in our dreams.

But that characteristic is possessed by other passing figures in the story. They are not demonic yet they persist and serve as functions rather than protagonists.  They appear, flitter across the terrain, have their episodes, then vanish for one or other reason. It is the flittering quality that renders them phantom-like, and particular in this context because Breaking Bad doesn't really deal in sub-plots. It is one big plot composed of patches yet focused entirely on one story.

Before returning to phantoms I think I need to consider the terrain itself, and here the word emanation suggests itself.

This is what William Blake says about emanations in his Jerusalem: the Emanation of the Giant Albion (1806)

The emanation in this case is a place - a void outside of existence, a kind of womb, that arises out of a particular being. In other words the landscape is really a figure. The fictional Mexico in the series is a kind of emanation, but then so is every other landscape.


But I cannot see a plain without a shudder,


Nature makes some places, we make others. Usually we compromise. Nature in Breaking Bad offers us deserts and plains. Humanity offers us deserted streets, low buildings, industrial sites, desolate eateries. Drugs go coursing through both as a form of alternative vision: an escape from physical low to mental high.

The accommodation between place and figure takes place as much in the mind as in externality. It is in the mind that  it resolves into phantoms.

Where are the people in Breaking Bad? Where are the non-active others, the extras, the crowd scenes? There are very few. Hardly anyone is in the streets. It's a ghost town, a phantom town. You drive into the desert or the plain for the kind of assignments the place invites ('..please, please, never make me live there'). These too are phantom places without precise location. People who spring out of it, or stay too long, die or are killed by someone else. They too turn into phantoms.

Walter, our protagonist may, as the creator of the series, Vince Gilligan, suggests, become the antagonist after a time but it is into his mind we are invited from the start. The landscapes are his, the phantoms his. They arise out of the raw flatness that, on the one hand, made him and, on the other hand, have been experienced as a kind of vision by him. In other words it is his emanation. He creates the mood terrain through which his journey moves. (Why this is hell nor am I out of it, as Mephistopheles says to Marlowe's Faustus). The emanation is produced out of the poetics of the narrative. Blake's 'Two Rocks fix'd in the Earth' is now desert and plain: flat, absolute, haunted.

In what way are people phantoms?

One traditional way of describing characters in fiction is as two-dimensional and three-dimensional.

The 3-D characters contain conflicts and can surprise us. They have a history that, we assume, produces the conflicts. They are unresolved, which is why we folow them towards a resolution.

2-D characters represent conditions. They may well represent our desired and fulfilled conditions, our superhero / supervictim selves. In terms of 2-D representation you can have Feeble Crippled Walter or Genius Criminal Heisenberg but not both in genuine contention.

Walter-Heisenberg, as he appears in the story, is a complex. He moves between Cripple and Criminal. Those are his polarities but that doesn't mean the distance between polarities is a blank. He could surprise us by having an affair, by buying a dog, or by deciding to cash in his earnings and move house. It could happen. He has the potential. The tension of the story would be lost but Walter has an existence that is almost independent of the story. That is what makes him 3-D.

Some other figures have the same possibility: Jesse has it, Skyler has it, even Mike the clean-up man has it. Hank has it to a degree. His wife, Marie, has it to a slightly lesser degree. Walter Junior to an even lesser degree.  Gus Fring might have had it but once we discover that he is worse than Tuco and the Mexicans (who never had it) he loses the third dimension because he is only a villain who was pretending to be nice. A villain pretending to be nice is functionally two-dimensional. He is an agent  and that is all. Or rather, he recedes from his position as a figure in relief back to the flat top of the table, that desert-plain where the other full phantoms move like shadows, making vivid, ever-more active shapes in the imagination,.

The desert-plain territory is inhabited by figures in various conditions of phantomhood. It is swarming with phantoms. The human drama consists of their movement into or out of phantom status. Jesse's dead girlfriend, Jane, rose into relief and potential 3-D status but then she died. The fell sergeant death arrested her. We might have imagined a 3-D life for her but she fell from sight before we got the chance.

3-D is what we share with Walt and his persistent possession of it is part of the genius of the story. A number of figures we pass along that desolate drive had the potential to become more than their function. We felt something for them and were briefly invited in to watch some movement between their polarities. We could contemplate the possibility of a denser inner landscape.

But then we are back in the desert, among the emanations. Our imaginations move through that fictional world of phantoms and we watch Walter slowly becoming one himself.  The terrible irony is that it was precisely because Walter wanted to escape his 2-D condition of phantom / victim that he set out in the first place. Someone suggested that Walter becomes Heisenberg because he is greedy for money. I don't think so. In this terrain money is only a means. What Walter wants is autonomy, a freedom that comes at an ever more terrible price.

Walter is at the centre of the emanation, its peak, its complexity. The members of his immediate family are his foothills,  the rest is desert. The temporal-spatial landscape has produced Walter, but he has in turn produced it. The landscape is Walter.

Isn't it ironic that the more agency a figure acquires the more he - or she - becomes a phantom and that the drive to 3-D ends in 2-D?

And when Walter leaves the desert and hides in the snowy New Hampshire mountains, he is already almost a ghost, symbolized by the dead winter around him, the blankness of the snow, his total isolation, his final desperate...oops, I forgot you haven't seen it all. More anon.

Nice breakdown of the show. This analysis works. The detail and depth of myth in the characters and settings adds dimension beyond the portrayed events. I haven't watched the final season yet, so thanks for no spoilers.