A Note on 'Song', a poem for Helen Suzman 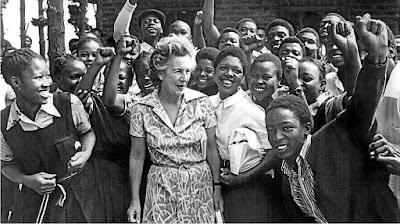 I was encouraged to write this by Neil Bowen,  editors of the anthology The Art of Poetry. He said students would welcome it. So here goes, in two parts. But the poem comes first. Then the two posts.

A lot of small hands in a monstrous hall
can make the air vibrate
and even shake the wall;
a voice can break a plate
or glass, and one pale feather tip
the balance on a sinking ship.

It’s the very same tune that has been sung
time and again by those
whose heavy fate has hung
on the weight that they oppose,
the weight by which are crushed
the broken voices of the hushed.

But give certain people a place to stand
a lever, a fulcrum, a weight,
however small the hand,
the object however great,
it is possible to prove
that even Earth may be made to move.

Nothing happens until something does,
and hands, however small,
fill the air so the buzz
of the broken fills the hall
as levers and fulcrums shift
and the heart like a weight begins to lift.