The Blind Musician and the Voyeurs 7 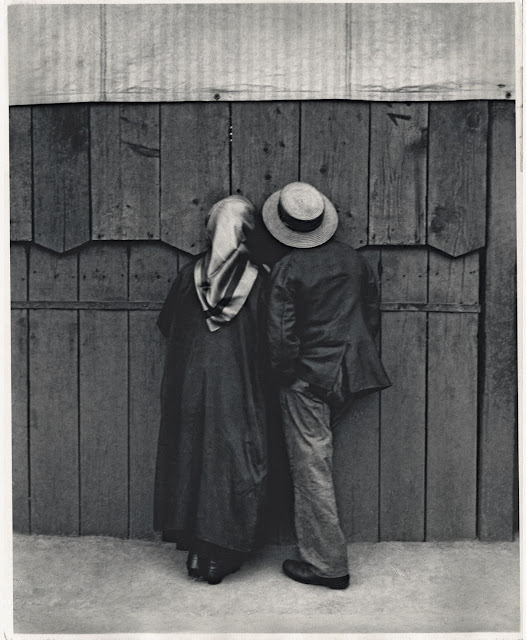 And one more Kertész: the photograph on the back-cover of the catalogue to Eyewitness, the 2011 RA exhibition, curated by Colin, of Hungarian Photographers of the Twentieth Century, titled Circus 1920.

This, to me, is one of the most wonderful and mysterious of Kertész’s photographs. Others may be more beautiful, more distinctly surreal, more crisply observed, more melancholy or even desolate, but this photograph presents us with a mystery at the very heart of photography. Do the couple know they are being photographed? What are they both be watching? Surely there is only one fortunate knot-hole to peek through. Where is the man’s right leg? Is it hidden behind the left? And why do they need to peek through a hole? Can’t they afford tickets?

But these are merely technical issues. The deeper questions relate to the very nature of photography and our relationship to it. Why are we fascinated by it? What does it do to us? Where does it position us? What is the relationship between symbol and the moment? Between statement and implication?

Here is the poem that I called ‘The Voyeurs’.

What are they staring at? Haven’t they seen enough?
Perhaps it’s natural to stare at backs.
Just as we pass a lighted window, light makes
visible that wealth of alien stuff
of which half our minds are made,
leaving us lustful, lost and afraid.

They too are in transit. Look at his hat
(a straw boater), her headscarf (a long
inverted flame), the way their clothes hang.
There must be a hole in the wooden slat
and beyond it something perfectly new
and terrifying that light will not let through.

Two things struck me about the photograph when I first saw it. The couple are observing a scene of people who do not know they are being observed. That makes them voyeurs. But we ourselves are observing them observing, which makes us voyeurs too. Is there, therefore, something at the heart of photography that is, essentially voyeuristic, and, if so, is that one of the reasons it fascinates us? For are we not natural voyeurs, fascinated by exposed windows at dusk or by figures glimpsed in or from a train, rather as the James Stewart photographer figure in Rear Window is fascinated by events in neighbours’ windows? Something in the Kertész photograph, or so it seems to me, strikes close to nature. We recognise in it something of the hunter (animal or human) watching his prey (animal or human.) And what of Susannah observed by the elders in the bible or the face behind trembling lace curtains gazing out into any street?

That is one thought. The other is more disturbing. What is it that we – or this couple here – are actually wanting to see. What is the attraction of the circus? Why the fence? Why is the hole in the fence so much like the aperture of a camera? What does the space beyond represent in the imagination? Here we all are, all but invisible in the vast spaces of the galaxy, marooned at our specific, microscopic moment of time.  What is there to see?

The poem has taken the liberty of interpreting a symbolic hint in the picture. The inverted flame shape, suggested by the woman’s headscarf, is a conventional symbol of death. Even if we do not consciously interpret it as such – and I doubt whether Kertész did, or at least we do not know whether he articulated such a thought in his own mind - once the photograph opens its multitude of doors onto the fields of memory and imagination, the symbol, even though we cannot name it, begins to speak to us and organise other parts of the image into a possible coherent whole. The man’s one leg, the halo of his boater, the absoluteness of those stern planks of wood with their jagged waves at just about neck-level, combine to support the death narrative. There is nothing dramatic in the narrative itself.  Nothing is obvious: it is all apprehension, all shudder, all admiration and marvel.