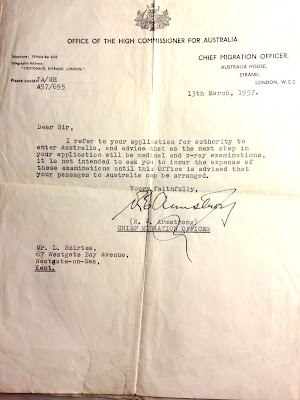 The original idea of leaving Hungary was to go to Australia - we declared as much to the immigration officer on the day we landed in England - where my father had a cousin willing to accommodate and find employment for him. There was at the time a £10 assisted passage whereby approved immigrants could make their way there by sea.

The book is not a personal memoir but an attempt to understand my rather extraordinary mother by running her history backwards from her death by suicide in 1975 to her birth in 1924. She had had a heart condition since the age of fourteen and this was to be the deciding factor in what happened next.
Among my father’s papers after his death I discovered a sequence of letters that traced the process of application. The first is from Australia House on 13 March 1957. It informs my parents of the necessity of medical and x-ray examinations and covers the expense at least until permission has been received. The two that follow bear the same date, 13 May. Both are from the Jews‘ Temporary Shelter office in Aldgate. The first tells us that we have a berth on the SS Sydney, sailing on the 27th and advises us to apply for a visa. The second cancels the berth saying Australia house cannot provide a visa in time but assures us that as soon as the visa is issued “transportation to Australia will be arranged”.
Then there is a wait until 10 July when Australia House wants more medical information, and names the doctor who is to conduct the examination. This time it is we who have to pay for it.

By the 30 July the medical must have taken place because the letter from Australia House informs us that my mother’s application has been rejected. No reason is given. But the case has been referred to Departmental Headquarters in Canberra for a decision.
So hope, then suspense, then disappointment, now again a little hope. On 25 September we receive a letter from Canberra on blue airmail paper. Apparently there had been an objection to the permit on the 10th but now the objection has been withdrawn and we can go ahead. We prepare to leave.

But there is another long wait until 18 November when Australia House write again. They refer to a previous letter of 10 October rejecting our application but also to the earlier letter from Canberra. They tell us they were aware of the Canberra decision at the time of the 10th (a letter my parents must have queried) but have rejected the application anyway, adding:


I would advise you that it is not the practice for the Office to inform unsuccessful applicants of the reasons why their applications have not been approved.

And that would seem to be the end of it but on 3 April 1958 comes another letter from Australia House asking my father to come in for a discussion and telling him to bring all his ID papers with him. Nothing comes of it and there is no further correspondence.

It’s a cruel business. The tortuous process, the encouragements then the refusals, the way the whole thing drags out all witness to my parents‘ desperation. And it is her fault, she thinks. It is the state of her heart that prevents us. She wanted out of Hungary but now we are stuck.

The house we are stuck in is the first proper house, the one in Kingsbury. We had been there since the second week of February 1958. The WVS Civil Defence office tells us:

We have been able to obtain some beds, bedding, floor covering, chairs and cupboards for your new house - also some china and saucepans.

So it could be worse.