23:15 in Guangzhou. Received my Poetry and People award tonight. What a ceremony, Chinese style! Red carpet, glamorous hostess, photographs of me at different earlier periods, a eulogy by the poet and awarder Huang Lihai in which, to go by the impromptu English translation, he clearly understands what I am doing as a poet, a lovely choir to sing to me. the presentation of the award, (a big statuette about the size of a small child and weighing about the same) and a print I haven't yet opened.

I say a brief thank you. Then music. Bits of film. Then I read two poems, then more music by a guitarist who has set 'After a Line of W H Auden' from Mapping the Delta (in Chinese), then Melindra launches the book with a short speech, more music, three of my fellow poets read from Mapping the Delta, then a small drama group perform their interpretation of The Yellow Room from the book, more music, a discussion...it's long, some two hours to a big audience and lots of press. 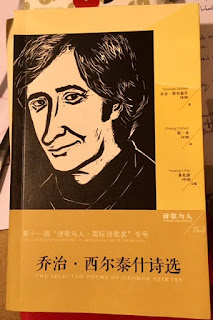 Then a lot of book signing, because there is a whole selected poems from the last three books in translation ready done. I sign far more books than I have ever done in one place in England.
It is exceedingly grand and I am not sure what to make of it all except be flattered and sane.

The prize is, of course, an enormous honour. The previous winners are a parade of stars (Transtromer, Zagajewsky, Dove, Walcott etc.) I am not one of those. But just for tonight, in Guangzhou and South China, I am offered as a pretender to such thrones and have a child-sized statuette I am tempted to call Del Boy now sitting next to the electric kettle in the university hotel room. How we'll get Del Boy home is another question. (Answer: send by what I thought was shipping but turns out to be air mail costing over £100). Still there is a money prize too.

Yesterday a big indulgent dimsum for all the group at 11:30 including black eggs and Chinese custard pies, followed by a tour of the university but first the memory of the journey by Maglev or 'bullet train' from Yangshuo to Guangzhou the day before.

After the mountains and plains the hills and the road to the airport. The coach negotiates a narrow unfinished road with stones from landslides sprinkled on it. There are new unfinished houses either side arranged to no obvious plan but with families living in them.

The road gets worse. Rough, unsurfaced, with big drops on one side and passing places with holes on the other. We wind upwards very slowly behind two trucks carrying rubble. It's all uphill and traffic down must gauge the space available.

When we get to the Maglev station it is fully modern and international standard. It is as if the development around it was an afterthought. There are a lot of stairs to climb with heavy luggage. The bullet train arrives.

Once on the train it is wonderfully smooth. All the buildings we see along the way look to be standard, constructed like Lego. No difference anywhere. When we move towards Guangzhou the same standard blocks grow into enormous high uniform estates. Very Brazil à la Terry Gilliam. Daunting, vast, military, convenient, monsters of anonymity, becoming more varied and pleasant as we approach the university which is a long way - Guangzhou has a c12 million population - in a crawl of traffic.

Sun Yat Sen university verges on luxury with marvellous tree-lined (eucalyptus, acacia etc) avenues, ponds, passages of dense vegetation and birdsong and, at the core of the old university, a group of hundred year old buildings that forms a suburb of its own. There is a bust of Darwin before one of them. Cyclists and electric scooter-riders weave through in silence. Some trees are being pollarded.

After the tour, the bookshop, a four floor emporium of beautifully produced books. The owner introduces us to the store. Books on all subjects, mostly designed to an understated delicate aesthetic, as well as gifts and a decent café with proper, though expensive coffee. You can buy a book for the price of a cappuccino.

Rúnar and I read in the evening along with our leader and inviter, Fan and - as a surprise - Jiang Shumei, a beautiful 80 year old woman who was illiterate till the age of 60 but who has since written five books and is teaching herself to paint.

Rúnar and I do our stuff then we listen first to Fan then to Jiang Shumei. Fan has written, in English, about her schooldays at the time of the cultural revolution and Jiang Shumei reads a recollection of the practice of foot-binding. Both are marvellous. Rúnar and I are literature, but Fan and Shumei are first-hand life, the realism of the real. It's spellbinding.

Then, to end, a junior school children's drama group perform, in English, a piece with music, singing and dancing, that they themselves wrote in English. Their spoken English is impeccable, their dancing sweet and one of the girls has a hell of a voice on her. I can't imagine an English primary school capable of doing the same in a very foreign language with the same panache, if at all. 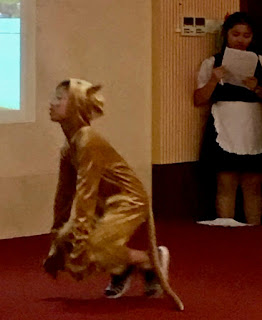 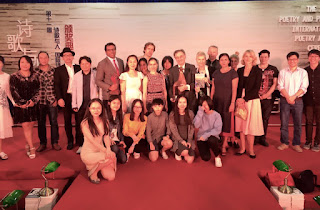 We learn more about China from Fan, Shumei and the children.

Then we break up. Rúnar, Gudrun, Clarissa and I pop into MacDonalds for a small burger. We need something plain after all the rococo dimsum.

Samuel Jackson and Travolta in a car.
I’m starving, says Jackson. Travolta agrees. Me too.
There’s a Big Mac round the corner, not too far.
A man’s gotta eat, he says. OK for you?

Ain’t nothin’ better in a fuckin’ jam,
Jackson replies. With plenty sauce. Too right.
Best wipe the blood off yo’ lapel. Goddam,
says Travolta, just too much blood tonight.

They bomb down the M and slip in through the door.
A queue at the counter, fat guy at the head,
behind him a dozen customers, maybe more.
Move, muthafuckas! says Jackson. Or you dead!


The cops burst in, big shoot out. Jackson dies.