More on the white shirt 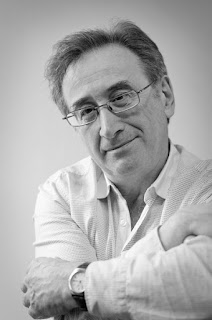 In the comments section to Image in a White Shirt I linked to a blog by poet Magda Kapa in which she reflected on my post and added some thoughts of her own. Now that Derek Adam's photographs - a selection of them - have arrived (one of them above), the thoughts move further.

Magda begins her blog by recalling how, when she turned forty, she took a photograph of her naked torso.


A little later in the post she adds a second reason. She took the photo so that:

...the “I” of three years after, should be able to control the “I’s” body now with the help of the “I’s” photo from before. How much had “I” changed during that time?


She regrets having somehow lost that photograph and ends:

I snapped a photo of myself with no shirt on. Were I a man, I might have taken a photo of myself in a white shirt, and imagined it in the hands of my descendants decades later. It’s this pressure to be something representable, presentable, or preservable that turns some of us — most of us, I dare say — into pillars of salt in front of a camera lens long before the inevitable stillness of our image appears in the photo.


I don't think there is ever clear blue water between the perceived binaries of male and female, but they do exist as perceptions and hence as experience - we do, after all, experience our perceptions.

There is much written about the idea of feminine beauty on the one hand and on beauty as an oppressive myth on the order. It is dreadul to bear the brunt of both. I think women are just as susceptible to feminine beauty as men are and that the dissatisfaction arises out of their specific obligation to be beautiful, or if not quite beautiful, to be attractive in order to be valued. Hard if you are, hard if you're not. I have forgotten which woman it was who said: Don't tell me I am beautiful, it will be so much harder for me when I am older.

No doubt the sense of beauty, however modified by historical and cultural factors, is associated with youth, desirability, fertility, the pleasure of glorying in the products of attractiveness, which means not only sensual delight, but the sense of power in arousing and controlling energies outside yourself through the energy within.

Like all human experience beauty is complex, from a pleasing arrangement of features and freshness in youth to that marvellous autumnal blend of mind, spirit and translucence that some women seem to manage.

I have seen physically beautiful old women, but I have also seen older women who were never beautiful and those from whom beauty had faded. That still left the mind, the spirit, and all kinds of qualities that are not to do with physical beauty: kindness, courage, initiative, wisdom.

The premium on physical beauty is high for women, not just culturally, but spiritually-aesthetically. There is constant human striving for beauty, for all beautiful things, for beauty as meaning, whether that beauty be in man, woman, creature, plant, rock, sky, act, movement, stillness or anything else. One beauty becomes an analogy for another. Beauty is various and variable, but one yearns for it. Feminine beauty is the most powerful form of it in a gendered world. It is power as well as value. But it is also - the possession of it or the lack of it - a burden

My early sense of myself as male had nothing to do with beauty, or rather everything to do with my lack of it. I was quickly led to understand that there were such things as beautiful children but that I was not one of them. I was told this tenderly, lovingly, indirectly, informally. By the age of two I was a prematurely adult professor, according to my mother.  That was my destiny and saving.

No woman, I was made to understand more directly later, at about the age of fifteen, would be attracted to me for my looks. If I wanted to attract a partner it would have to be through some quality of intelligence, a quality I wasn't actually demonstrating at that point, not to my teachers, not to my parents, and certainly not to myself. My parents lived in hope I would produce it in as spectacular form as I had once promised to do.

It was, I should say a desolate feeling. Because there were others who were both intelligent and handsome. Because it made me more awkward than I already was.  And chiefly because I was in love with beauty, the beauty of girls. It was beauty I wanted more than sex. Sex was yet to be, urgent, frightening, bestial, potentially humiliating. Beauty was comforting and desirable, a kind of otherworldly perfection .

The girls I desired were young and attractive. Their power over me was overwhelming. I was of another, inferior species. Did they but know the power they had over me they could have made me do almost anything.

That was youth: what it was like in the presence of beauty.


We project onto one another what we need and hope for. Magda's naked torso, in its youth and attractiveness, was partly the memento of having been seen as such. The seeing eye might be a man or a boy, as I myself once was, but it might just as easily be the idea of beauty itself as perceived in another woman, that is to say a learned or culture-based image, at least partly so. Women learn to look at themselves as a looked-at thing.

That is an enormously seductive and intoxicating condition while the woman is young, but gathers ever more shades about itself as time passes. Young women complain of being looked at, the old complain of not being looked at. Beauty can become a source of resentment, fury and cold disdain. Maybe it need not have been so in the first place, thinks the woman. Perhaps our sense of the beautiful is a myth, a trap.

In such a mood even my boyhood desire for physical beauty-as-meaning might be seen as constituting a demanding and hence aggressive act, so while I thought I was the helpless subject, really it was my desire for beauty that was turning the girls into objects.

Perhaps. But girls too see meaning in beauty that is not just their own or analogies of their own. Girls too objectify men. The world is full of objects.

In Twelfth Night, one of Shakespeare's great gender bender plays, the two sides of beauty come together in Olivia and Viola's first meeting. Viola appears as a man and asks to see Olivia's face. Olivia coquettishly decides to assert her power over the attractive male visitor, revealing her face with the words:

Look you, sir, such a one I was this present. Is't not well done?

Excellently done, if God did all.

To which Olivia responds:

'Tis beauty truly blent, whose red and white
Nature's own sweet and cunning hand laid on...


Olivia falls for Viola but marries her twin brother, and Viola, the most intelligent and resourceful figure in the play, marries Orsino. In the meantime we get buffoons, revels, duels, humiliations, imprisonments, revenges and it's all heigh-ho, the wind and the rain.

And we are left with the feeling that Orsino does not deserve Viola. She has more than physical beauty. He lacks perception and kindness.
It is fascinating what you were told as a child about beauty. I too never saw myself as beautiful, but decided I could at least be clean and wholesome. It must be a burden to be a beautiful object. Much dearer bought is a life of loving and goodheartedness that shines from some faces, including yours, George. Maybe we need to grow to be truly beautiful.

The question of beauty (youth+attractiveness in most cases) is - we reason - not the same as the question of love. But they are associated. It is just that a wise eye will not look at beauty alone, or seeks a broader definition of beauty.

But beauty remains beauty, well beyond the myth. It is never completely absent from our minds as we choose the colour for a wall, an item of clothing, or even one particular electric kettle over another. It is a factor. We live with it.

And it is the same with the god Adonis and the goddess Venus. They are myths, of course, but remain as young as our energies demand.

Excellent self introspection George and a very honest self analysis. I however think of you as inherently handsome which manifests itself in an amalgam of inner goodness and sharp, classically perfect lineaments. The self consciousness and beauty seeking you describe in your youth is a feeling many of us had and still have intermittently. At the end of the day handsome is as does handsome and you did handsome and are handsome both wholesomely and physiognomically.

And relativity is my blog, Bharat here. xx

Hello George,
I must say you look very handsome in your white shirt photograph which reminds me of one half of those 1950's (or whenever it was) Persil washer whiter posters - but which half I won't say! Or maybe dare not ;-)