Literary Festival Worlds 13:
Geoff Dyer and myself, summing up Since Geoff Dyer came directly before me it was hard to do any kind of justice to his provocation which was, as ever, the full value Dyer, meaning it was a series of probing, funny, perceptive, ironic yet passionate points that rained down on the field below as if from a plane that was simultaneously performing aerobatics. In other words Geoff is sui generis and summing him up without actually becoming him is very difficult.

At the core of his provocation was the connection between book and self, the way books communicated with each other, in fact how any work of art communicates with another. He paid homage to his great mentor, John Berger, who was, he said, the English equivalent of Barthes and Benjamin. He cited George Steiner's "Latent in every act of reading is the compulsion to write a book in reply". He talked of his own But Beautiful in which he completes or invents meetings between great jazz musicians. He showed us photographs of jazz musicians together - Ben Webster with John Coltrane for example - and played us a YouTube of Webster playing Chelsea Bridge, over which he began to read a part of his own writing about the Webster (this irritating Rozalie Hirs, the one poet-musician writer among us).

He talked of themes in photography and how they sparked responses in other photographers, and of his own book on photographs featuring blind people, hats, backs, fences, and so forth. How does one reconcile the successive and the simultaneous (how in fact does one distinguish one from the other sometimes)? Artists quote each other, riff on each other, criticise each other. His own 'greatest achievement', he told us, was turning a book about tennis into a book about Tarkovsky's Stalker.

The discussion that followed turned for a while to the problems of branding and copyright, and why words might be more subject to such trademarking than images or musical phrases are. (Titles are apparently not copyrightable). David Szalay asked a fascinating question that has sometimes occured to me, 'Can too much criticism interfere with the creative process?' How does theory inform or determine writing? How far does any criticism influence the writer? How far does it make her self-conscious?


Nothing of the two paragraphs above was written as part of the summing up. I was too busy thinking about Geoff's provocation, the summing up itself, and very aware of the shortness of time. If I had to sum up Geoff's provocation now I might come up with a comic image if only because his provocation invites us to laugh at the performance of what I sometimes think of as the mischievous dramatic character 'Geoff Dyer' - but that wouldn't do justice to the clarity of his ideas, the way he presents them, the extent of his scholarship and the passion and energy he applies to any subject whether that is the First World War, D H Lawrence, photography, music or film.

The seriousness comprises the apparent lack of seriousness. I remember Geoff some other time on the subject of The Burning Man Festival in the Nevada desert. I think there is something of that burning about both the man and the provocation. In the spirit of the provocation, and very much after the event, I offer him the image of a burning match. It's only a match in a wooden mannequin's fingers, but it can set fire to a great many things.

The conclusion of my summing up follows. Those who want to listen to it as a continuous single piece can find it here. It is about 20 minutes long.

I want to write two more blogs about the festival - about the readings as a whole, and about the launch of Into the Light, the Medieval Hebrew Poetry of Meir of Norwich.

I sometimes feel that, as a poet among novelists - there are just two of us here - we are like children who have been allowed to come away from our free-to-experiment best-contemporary educational sandpits to engage in conversation with serious adults, who, like, actually make a living from their art, so we too can talk about their serious art.

We poets tend to think that the world of language began with two equally important imaginative acts, the poetic act and the story-telling act: Mr What’s This, and Mrs What’s Next if you like and that furthermore that in our heart of hearts we all know this to be the true.

But we must after all be children because here you see what I have brought you from the sandpit - poet’s toys. A plain fork, a toy cabin, a second-hand book on which someone has scribbled, a plastic wrestler known sold in a cheap shop, an everyday bottle, and this piece of tissue that I will take back so I might put it to its proper use.

And this one short poem, which is in fact a piece of marginalia, one based on a translation out of the Arabic of Mahmoud Darwish that I was handed by Mimi Khalvati as a technical exercise. Mine isn’t a translation but a transplantation as, for all I know, his original poem might have been from something he had long read and forgotten. The life that he loves in his poem, We Love Life Whenever We Can, is what he knows and sees around him. My small annotation or piece of marginalia is composed of what I see about me. (Click on the poem to magnifiy it.) 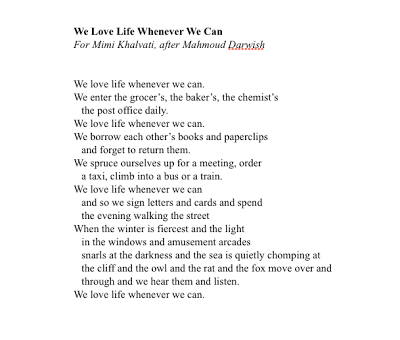 I end with a photograph I took of the developing perigee moon at 3am on the night before the last day of the festival when I couldn't sleep. It's how thinking looked then. 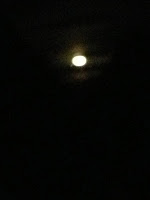 This (all of this last blog) simply flies, George. I read it fast because I'm on my way out but it is exhilarating and I shall go back to it with such joy tomorrow morning. To be read slowly with savor.

Thank you, Diane. I suspect I am a bit tetchy about the status of poets at the end. Nobody means to patronise but sometimes the arguments come out that way, as in the discussion of the literary novel. The other poet at the salon remarked on our lack of numbers and it occured to me to mention it.

No, you are absolutely right about the absence of poets. It is decidedly odd, or so it seems to me, to spend an entire week of debate amongst writers without noticing that prose fiction writing is only a single literary form. I still tell students that the poetic form is the most highly distilled and highly disciplined form of the communicative act in literature -- or, indeed, in writing. Perhaps that's why it sometimes frightens.