Sedona: a poem, its sources, and its shaping 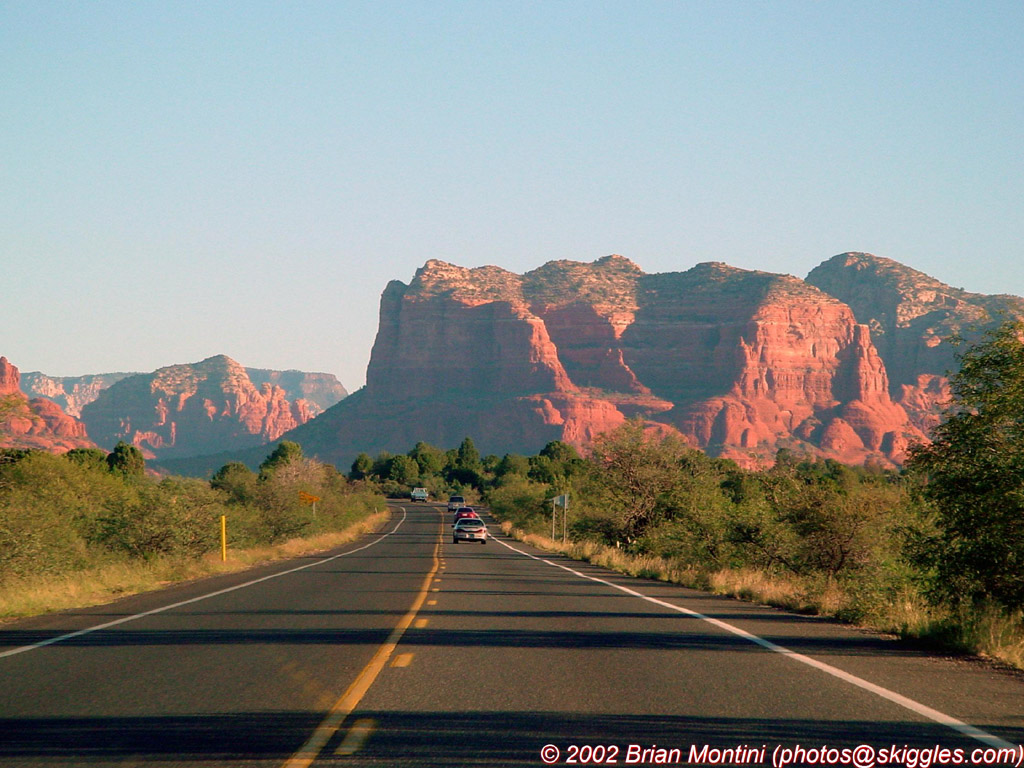 You are travelling
into fantasy terrain
in a white Buick,

eyes fixed on the road,
the central reservation,
and the dust rising,

so you might dream it
or remember it perhaps,
passing Sedona

with Sonny Terry
and Brownie McGhee, the light
dazzling and constant,

to Sonny Terry's
harmonica, with blind eyes,
into the desert,

- a filling station,
a Navajo store, a bar...
Did these once exist?

And if they did, what
was it about Sedona?
What was your name then?

Were you ever there
or anywhere where time is?
Was Sedona real?

And this photograph,
or that photograph, is that
your tongue, your closed eyes?

This is one of those poems that starts about 4 am after an hour of lying awake. I have had a few broken nights recently since I sprained my wrist about eight days ago. I wake as I might normally do but the wrist hurts and I can't get into a position that is comfortable so I read what I can in that condition having put aside whatever is too heavy or carrying too long a narrative and resort to the brevities of Twitter which is a godsend if only because there are so many fascinating scraps of writing and imagery on it.

The poem itself began after reading a line by Alice Bishop, an Australian writer and editor I hadn't heard of before. That line, in prose, was: "Her eyes, they're roadside scrub and well-fuelled flame". I thought that was lovely. I didn't know who the 'she' referred to was but Bishop's avatar showed a well dressed young woman leaning against a cliff by a dirt road, turning away from the road. The image together with the line offered something deeply packed and intriguing.

My first instinct was to do something I hadn't done before, which was to take the line and build something from it, while fully acknowledging the author by tagging her in, but that is a complex procedure on a platform as tiny as Twitter, especially at four in the morning. Nevertheless I played with it as a possible first line and a half (my longer narratives recently have all been on the 5-7-5 syllabic pattern and usually comprising ten verses) but then dropped it because I felt anything I might say about the female figure in Bishop's line, however I removed her from that context and placed her in one in my own imagination, she might turn out to be a second-hand figure for me. I could see her but couldn't smell her. It was in the process of thinking that and droppping the idea that the clue to a subject of my own arose.

In 1997 Ian Duhig, the late and much loved Julia Darling, Athony Thwaite and I were doing a British Council tour of Arizona. We had the use of a white Buick and drove up and down the state to various reading venues. On one occasion we got lost on a road fringing the desert and ran into the beginnings of a dust storm; on another we drove through Sedona with its red rocks. I remember feeling vaguely unhappy in Sedona, as though I were lost within myself.

This was what I needed to get started. I just had to visualise being on the road again, almost any road, a road at any rate through a desert in some compartment of the memory and I immediately felt I was on to something. A possible montage of images opened up like a chaotic map with no clear road only the sense of being on the road.  I could smell the road. I began writing.

So the verse with which the first draft started and which is now second emerged. There is the careful driving and the dust though I don't actually remember a central reservation. Maybe it was an odd linguistic slip referring to another part of the same journey, a visit to the Navajo 'reservation' that inserted itself here, though that experience was something different in kind and I wrote about that at the time.

All this is composed impromptu, verse by verse, each verse immediately appearing on Twitter as a free-standing text. (I should explain that, for me, there is a certain creative tension in writing in this half-exposed manner. It is something to do with being on full alert, at the edge of things, not quite in the court of the self.)

Having finished a run of eleven verses (the ten I had did not seem quite complete so I added an eleventh) I copied the lot out with a few changes and left it overnight.

When I woke up and re-read it I felt the poem wasn't quite right.

The problem was twofold: the first problem being the reiteration of information - the white Buick in particular; the second a matter of pace, flow and opening. The questions and recapitulations half way through had the effect of stopping the poem before restarting it.

The electric charge that should carry the poem through was fading before recovering.

So to the bureaucratic details.
To be brief about this, the various verses got rearranged in the redraft which also entailed other minor changes though the material remained what it was but a little clearer, a little more open to the experience it was constructing as it went along, which was, essentially a sense of desolation in Sedona, a feeling that one might have anywhere in the world, except this time it was in Sedona in a white Buick.

I am writing this down as much for myself as for anyone else in an attempt to understand articulately that which I do instinctively. That can only be done in retrospect. I could not write with a retrospecive formal consciousness. One has to keep moving forward.

More importantly perhaps I talk about the core feeling of the poem, the driving force of it, as a memory of desolation but 'desolation' is an approximate term: it is the poem that is the real feeling and that feeling unpacks itself as it goes along, dragging a lot of other unnamed unidentifiable, almost incidental feelings in its wake. And that is, I suspect, what all poetry is even once one discards the well-known items of 'lyrical' baggage.

The point is you can't take the baggage with you. You have to discover it along the way.

Interesting poem. I hope that your wrist heals soon. I used to love Julia Darling's work (still do) and was shocked by her early death.

George, I enjoyed the poem. Many thanks for sharing it and also about the events leading to it and last but not least explaining the technicalities.

One writes what one writes, Simon. Sometimes it is interesting to others at other times not.

As to the process, Gwilym, it is something I cannot help but be aware of (as prsumably others, including you, are aware of theirs). The question is whether one tries to suppress that knowledge for fear of the dangerously and possibly limitingly overt or whether, if something is so, one tries to say so, or at least how it seems.

Having said that, each poem is a new poem and has to be. A process isn't a guaranteed product, especially when unpredictability is built in to the process.