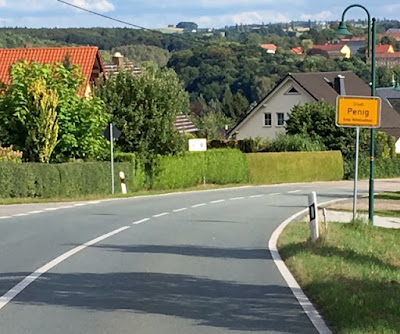 Flight lands at 10:40, about half an hour late, in Leipzig. Ringo, Tobias and Uli immediately recognise us. They don’t speak much English between them but we do manage to talk along the hour’s drive to Penig, taking a slight detour through the streets of Leipzig, a handsome city where the artists of the New Leipzig School worked and continue to work.

The camp at Penig was opened, Ringo tells us, in January 1945, which is when my mother arrived. It housed some 700 Hungarian women, one of whom Rózsa Deutsch is still alive. Deutsch kept a diary after 1945 so they could talk in depth to her in German Otherwise they haven’t got very far. There are only five in the group and they have been operating for only three years. All are in their forties now so roughly the age of our own children. Ringo is an engineer, Uli teaches in a nursery and Tobias works with children-in-care. Ringo, sitting next to me, mutters under his breath in German when trying to think of a phrase in English. I wish I spoke German but I did Latin at school instead. My father spoke it pretty fluently and he also had some Russian. Me? Some French, and reasonably fluent Hungarian. We should, as Michael Hoffman writes in today’s Guardian, speak more languages.

We pass a couple of cooling towers and a laser display, then some slag hills marking an old mine now a resort. Nothing to see of landscape except that it is relatively flat. Highways at night are much the same everywhere. It is dark, the journey smooth, the conversation dying eventually for lack of linguistic energy. The landscape is no longer as flat.

The strangest thing is suddenly seeing the name Penig appear on a road sign. The name becomes a place. We are entering the name. We turn off the dual carriageway and make our way into further dark, finally entering the small town whose population is less that Wymondham’s, under 10,000, but which looks as though it’s longer and wider geographically.

We wind our way through until we come to a bridge over a river, the Zwickauer-Mulde. We take a narrow cobbled lane straight after and proceed along the bank for some thirty yards before arriving at the hotel where we are greeted by another of the group, Janine, a tall friendly woman of roughly the same age as the rest. She shows us to our room. It is large, simple and clean. The windows open on to the river and the constant rushing sound of the weir / filter / electricity generator  that is directly under us. It sounds like steady rain and takes some time to get used to it but once we are asleep we remain asleep. 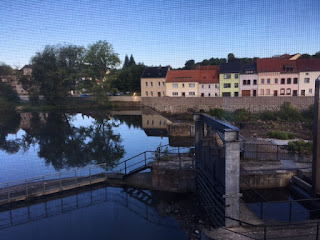 It is only in the morning we actually see what is outside. It is idyllic, a lovely town with gardens, the river wide and clear with dense lines of trees further down the bank. The beauty is a startling counterpoint to the horrors that took place at the camp, where my mother spent three months working at the nearby airplane factory, wearing wooden shoes or no shoes at all in the snow, in the thin summer uniform provided, marching miles to get there, working long hours then marching back in ranks of five, the most tired often asleep or half-asleep, in the middle, supported  by the two on either side.

Breakfast downstairs, the room again handsome, clear, healthy. Clarity in light, clarity in order, clarity in language, everything cleanly articulated: spotless. There is just one other couple present, Germans set for a cycling tour. The cook speaks no English but we manage. After bright sun we now have light cloud. The plan is to walk to the site of the factory, then to the concentration camp and back.