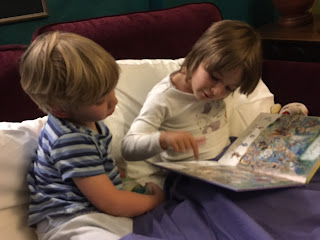 They have gone to bed, not their bed but our fold-out sofa that makes a generous double bed.

They drew and coloured in. Marlie made a magnificent drawing of me sporting a small goatee but without ears. It's a shame about the ears but what you lose here you gain there and who am I to complain? I didn't complain when Picasso gave me two noses, neither of them small. He always said he could draw like Raphael at the age of twelve and spent the rest of his life trying to draw like a twelve year old child, but Marlie has done better. She draws like a six year old child and she is only six. She is well ahead of the game.

Then we played Hangman using a box with lots of plastic letters (like, who needs paper and pen nowadays?) Marlie played on Clarissa's side and Lukas assisted me, and we had BURGLARS and WEDNESDAY and PORTERS and whatnot (but not WHATNOT).

After that it was bedtime with a good deal of rumbustiousness followed by a story from an old book about a boy who wants to go to the zoo but can't and instead observes how everybody's shadow looks like an animal, which is a nice variation of the art of shadow puppets where two hands together make a dog shaped shadow on the wall.

I wrote one sentence of my mother book, then cut it out and put it back again before adding a second sentence. It has been that sort of day, but something will come along yet, even if it is only a scribble of immense frivolity.

The sky is a pale but luminous aquamarine with one roly-poly cloud looking all twisted up.

So far: burglary, imprisonment, rolling-in-sheets, hanging-upside-down, a morning of crime and torture with Marlie and Lukas. Prison is the shower cubicle where you are sentenced to 240 billion years reduced to 5 minutes on the cosmic calendar. Lukas turns a bangle into an anklet. This being Star Wars territory we are all on the Dark Side and I am named (a rather ineffective) Emperor. Later the bed becomes a police car.

I am faintly secondary to Clarissa most of the time. She handles everything with great aplomb and maintains order even as a criminal chased by the police. My own appearances are rather more stagy, a kind of Poundland Donald Wolfit. I oversee and carry through the hanging-upside-down. We have not got on to waterboarding yet but surely it's only a matter of time.

When Rich and Helen come to fetch them.  Helen suggests I write a rhyme to remind them of their table manners/ Here it is.

You’re not to mess around or play with food.
To leave the table without permission is rude.
You don’t speak with your mouth full, you  don’t splutter.
You don’t spread bread with huge dollops of butter.
You don’t grab what you want and leave the rest.
You don’t reach for the biggest or the best.
You use a knife and fork and not your hands.
You ask politely and don’t make demands.
You eat what’s put in front of you, don’t whine,
And if you can’t, smile nicely, and decline.
You  don’t rock on your chair in case you fall,
But it’s far better not to rock at all.
And if you’ve farted there’s no need to shout it.
The others will already know about it.

This is your ultimate table manners list.
Your parents can make up anything I’ve missed
Not that YOU need reminding in a rhyme.
Because you’re VERY good (most of the time.)

They'll be reading Charlie and the Chocolate Factory before you know it, if they aren't already. Children nowadays don't have it easy with the dreaded addictive pocket monster known as the Pokemon lurking around eager to make them all short sighted, addicted and round shouldered.

Delightful, George. When our grandchildren sleep over, I have to use the fold-out sofa. And I am the one who feels as though I've been flat-packed into sleep and out again. Love the rhyme,

No Pokemon yet, Gwilym. And yes, precisely that, even in our own bed, Martin.