The Blind Musician and the Voyeurs 4 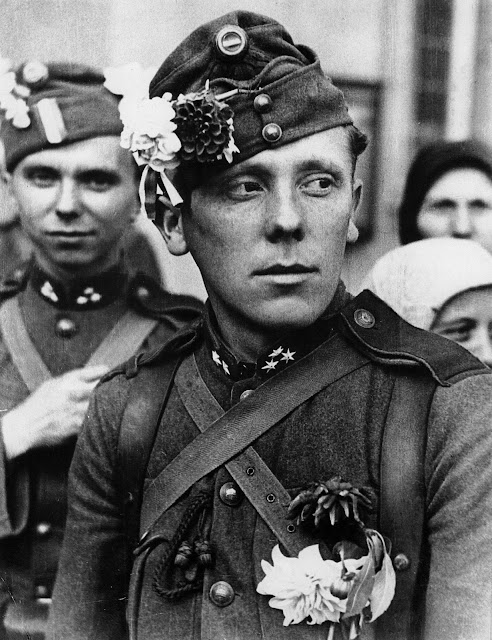 Let us look at more of Escher’s work. Here is Soldier Entering the Re-Annexed Territories (1940). The soldier is probably marching into Transylvania just as my mother is considering leaving it. The caption in The Hungarian Connection catalogue called it Soldier Going to the Front and dated it 1947 which clearly cannot have been the date of the photograph since there was no ‘front’ in 1947. War was over. In any case, the photograph was the subject of a poem in my 1988 book, Metro, so is likely to have been based on the exhibition or the catalogue. Here is the poem:

A Soldier
(after Károly Escher)

A young man with two flowers in his cap
Has turned away across the platform
To move towards two women wearing headscarves.
He is the country I am leaving.

He is beautiful, a beast decked and garlanded,
He stands gently and placidly, tall, slim,
Melancholy, prepared for sacrifice,
A peasant soldier, simple as they come.

Death has half closed his eyes
Ready to devour him at a blinking.
Behind his head the blur of a wagon pulling out.
He seizes one of the women, embraces her,

Presses himself against her.
As we depart I am tempted to shout
To attract his attention. I can only guess
The occasion of his death, his tenderness.

I must have believed the caption regarding his preparedness for the front and discounted the date as an aberration because I saw in him a sacrificial beast prepared to fight, from my point of view, on the wrong side – in other words supporting the Nazis – yet somehow as a symbol of something innocent and tender. The two women with the headscarves are behind him and nobody is embracing. The embrace has either happened or will happen. I think it was some quality of the photograph that caught my attention and produced the embrace, something rooted in the specific moment (though not the specific moment I had thought) but extended beyond into a symbolic field I could only sense not describe. The poem had been launched into that field by the photograph. Had I known that the young soldier was not heading into battle but towards the repossession of historical territories it would probably have meant something else, something more complex, rousing other feelings and thoughts.

The photograph is a document yet so much more. Much of Escher’s early work between the wars was in fact documentary, recording poverty of the Thirties for example as in his Evicted Tenants (1934)

The subject in these photographs is so powerful the symbolic level is pressed a long way back. Such photographs are very valuable as works of sociology, registering a phenomenon. They are part of a job recording something that needs to be recorded with an eye to the most powerful image. They are, in that respect, not without a symbolic aspect but the condition of the subjects reminds us that they are suffering specific conditions at a specific time.  They are a social cause that should be addressed. But there is more. There is always more.

How much more there is and what that more actually is is the question that arose for me when asked by the Barbican Gallery to write about certain photographs by Sebastaio Salgado. The exhibition formed itself a question for me. At what moment does misery become beauty? Is beauty that something more?

It is an uneasy, faintly queasy feeling confronting such images as aesthetic objects.