THE BLIND MUSICIAN AND THE VOYEURS 2


By this time she is no longer a press photographer doing stories for Esti Budapest, an evening paper. Her damaged heart, ruined by rheumatic fever at the age of fourteen, is not up to it, or so I hear according to one story. She collapses in the street. She can’t go out on stories but must work in the lab and at home. Another version, from much later, suggests that her work has been restricted for political reasons. She has refused to file the expected reports on her colleagues, a serious omission in Stalinist Hungary. Besides, she is of the wrong class, a middle class woman and therefore untrustworthy, unlike my father whose own father worked on the factory floor, which is why dad is not only in the party, but in the ministry of building and quite high up too.

In any case, she is here in front of me, working, tired, frustrated, and a little snappy. She is – though I don’t know this then, and even if I knew I wouldn’t quite have known what to do with the knowledge – from a city in Transylvania, in a territory once Hungarian, then, after the First World War, the territory having been ceded to Romania by the treaties of Versailles and Trianon, Romanian, then once again Hungarian, ceded back to Hungary in 1940 under pressure from Hitler and Mussolini. But right now, as I am looking at her, in 1954, her home city is back in Romania. This is how the amoeba works. The pseudopodia stretch out and retract. She is a creature of the amoeba. 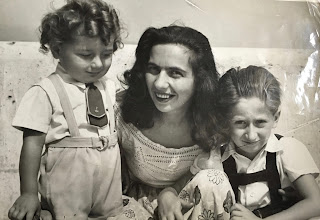 It was after Northern Transylvania was ceded back to Hungary that she – herself an ethnic Hungarian – left home at the age of sixteen to come to Budapest in order to be apprenticed to a well-known photographer called, so my father told me after her death, Károly Escher.


Escher now seems to me one of the greatest of Hungarian photographers, someone to rank with André Kertész, Robert Capa, Brassaï, Marton Munkacsi and Laszló Moholy-Nagy as an unknown yet international master. Interestingly, those masters are all, bar Capa, men of the same 1890s generation. Capa, born in 1913 belongs to the generation of some of the great Hungarian women photographers, such as Éva Besnyö, Judit Karász, Ata Kandó and Erzsi Landau.


[to be continued re: Escher]