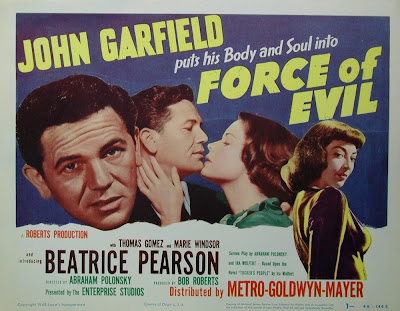 The difference between rhythm and metre has been on my mind recently arising out of a discussion with a doctorate student who talked of rhythm as something superior to and quite other than metre. I can't quite see how this might be since rhythm presupposes some kind of regularity against which it plays.

The reason it comes to mind today is that I have been working on a commission to produce a verse play for radio. Something very short, of only some seven minutes length.

I had heard of a Hollywood film whose screenplay was in blank verse and had long wanted to find it. Mentioning this to a film studies colleague at university, she first said she hadn't heard of it, then, to my great delight, an hour or so later knocked at my door and held out a DVD of it.

The film is Force of Evil (1948), a version of film noir starring John Garfield. The director and co-screenwriter was Abraham Polonsky whose first film it was. It turned out to be his last for twenty years. Polonsky was a Marxist in the McCarthy era and the film was a study of financial corruption. It has some excellent performances and the verse script. Can't embed but I can link to some dialogue. The blank verse is in there, beautifully naturalised. 'Look it up for yourself while you are at it...' says the femme fatale. 'What do you want? What are you waiting to see?' he shouts.

I have a draft. We'll see how it goes.

I'm afraid the blank verse passed me by, so mesmerised was I by Marie Windsor's beautiful, sculpted hairdo and her wicked, controlled voice. Those femmes fatales certainly knew how to undo a man. Good luck with your verse play. Do we know when it will be on?

Hair as sculpture. I wonder whether the femme-fatale was particularly drawn to sculpted hair. I think Fenella Fielding was a wonderfully pastiche and slightly camp femme fatale and she had a kind of bob or was it fringe? Must check.

I don't even know even IF the play will be on. They asked me to write a brief play for The Verb but I don't imagine they'll get down to seriously considering it for a couple of weeks. If they don't want it I'll put it up here.

I may be on the wrong track but isn't metre something regular, like a pulse or heartbeat, whereas rhythm is flexible, equivalent to 'rubato' in music?

Hard distinction, Frank. I think rubato might be a question of tempo. I have always thought of metre as the equivalent of the conductor's left hand, the time signature that the bar uses or opposes or conducts a dialogue with. Metre as metronome is a touch dull, but not altogether beside the point either. I mean composers will often put a metronome sign up too: a crotchet is worth so much. But that's a matter of pace.

Pace, tempo, metre, rhythm. I doubt you can have rhythm without a sense of metre in the background somewhere.