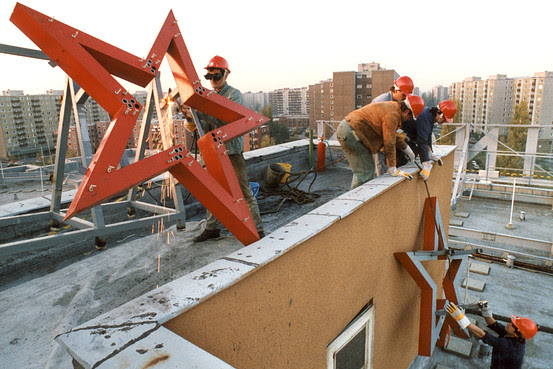 I began by responding to a couple of points made by Kovács and Schöpflin.

1.I pointed out that there wasn't a single socialist narrative in Hungary after 1989, since the centre-right MDF, and later Fidesz itself had had periods in power. [This also suggests that whatever financial and constitutional mess the country is in now is not the doing of one party - My own sense of it is that the mess was actually the result of the Kádár regime's foreign borrowing in the 80s. I didn't say this but do think it];

2. I suggested that while Professor Schöpflin had accused critics of giving no details he had given none himself;

3. I also wondered why, if Eastern Europeans were regarded as 'hairy barbarians' no one was accusing the Czechs or the Poles of being the same. Text follows

I should first of all make it clear that I come to speak not against Hungary but against the Hungarian government which is not the same thing. I begin like this because all criticism of the current government is regarded as anti-Hungarian. In other words, Fidesz, the governing party of Hungary is deemed to be Hungary. Furthermore, if one does criticise the actions of the Hungarian government one is regarded not only as a traitor to one’s country, or in the case of foreigners, as enemy of the state, but also a liar who must be communist or gay, or an agent of international finance (by which one generally understands ‘Jewish’), or indeed all these things at the same time. Because, evidently, it is only communist-capitalist-gay-Jewish liars who could possibly find anything to criticise.

I was born in Budapest in 1948 and came to England as a child refugee in 1956. I first returned to Hungary as a writer in 1984 and have visited most years since, including a nine month stint in 1989 when I was not only on the unofficial procession against the then government on 15 March but also in Heroes Square on 16 June when the dead of 1956 were publicly celebrated and the current prime minister Victor Orbán made his speech calling on the Soviet troops to be withdrawn. And lastly on a personal level I should add that, besides writing my own books, I have spent every week since May 1984 - including this one - translating Hungarian literature - poetry and fiction - into English and am very proud to have done so.

My personal reason for arguing on this side of the debate is less because of this or that specific act of the Fidesz government. My reason is the sum of them all and through them the creation of a climate that seems to me inimical to the country I have loved and admired. Little by little I find every part of it is being dismantled and banished.

What is interesting about Fidesz’s great slew of constitutional reforms is how specific issues - the issue of the central bank, the issue of the lowered retirement age for judges, the question of data protection, the question of state support for varieties of religion - when raised by the EU, are rejected as factually wrong, then, under external pressure, reluctantly addressed.

All these are minor problems that will soon be sorted out, argues the prime minister on an almost daily basis.

There are I think, various problems with the new constitution and its application. I will consider just culture and media.

One might dismiss the claim - as some do - that the newly created Media Authority is stuffed with Fidesz supporters by arguing that ‘The members of the Media Authority are professionals; how they vote is immaterial’. In other words that their political affiliations are a coincidence.

It might be argued that the power to levy ruinous fines on journals or programmes that do not show the right kind of political balance or which ‘breach human dignity’ - by doing what precisely? - has not been much used yet. It doesn’t have to be used with great frequency. The threat remains, inviting self-censorship. In this and other respects the Hungarian government acts very much like its bête-noir, the old pre-1989 party-state.

One might argue that the sacking or retiring of some 570 members of staff from branches of the media and their replacement by right wing figures, is just clearing dead wood.

One might argue that the replacing of an internationally recognized and applauded theatre director, such as the head of Trafo by a relatively inexperienced Fidesz supporter is just the luck of the draw; that the ousting of the heads of provincial theatres and that the appointment of a member of the far right Jobbik at the Ujszinhaz or New Theatre was a little local affair; that the refusal of a license to the only independently critical broadcaster Klubradio was purely a commercial matter; that the organisation of a grotesque exhibition of kitsch art to celebrate the new constitution is not an attempt to represent history from a right-wing inter-war Horthyist point of view, and that as such it has no consequences for the future of Hungarian art; that the smearing of leading international philosophers like Ágnes Heller and others is a genuine investigation into corruption even when the case collapses; that the rebuilding of the square in front of parliament so it should correspond to the pre-1943 model with memorials appropriate to that time and ethos, and the moving of the statue of the great Hungarian poet, Attila József are interim measures of no political consequence; that the demonising of internationally known Jewish cultural figures such as then Nobel Prize winning writer Imre Kertész, the concert pianist András Schiff, and other leading musical figures like Adam Fischer and Ivan Fischer is unconnected with their criticisms of the Hungarian government; that the take-over of the long-standing major English-language magazine the Hungarian Quarterly is unconnected to any political agenda; that the sacking of headmasters, the reduction in the number of places in Law and Economics at the major universities while building a new university of governance to follow the Fidesz line in ideology is nothing to do with many economists’ critical view of the government’s economic policy and certainly nothing to do with Victor Orbán’s remark that Hungary needs no law graduates; that although it has adopted some of the policies of the far-right party Jobbik, who constitute the third biggest force in the Hungarian parliament, the Fidesz government is fiercely opposed to all that Jobbik stands for, and that its refusal to debate with the MSzP in public while doing so with Jobbik is not a sign of its own political leanings; that the statement of its greatest supporter in the press, the editor of the Magyar Hirlap, Zsolt Bayer, to the effect that more Jews should have been massacred while there was an opportunity, is of no consequence to it; that the opening of secret files that Fidesz proposed earlier but which it now wishes to keep closed is the act of a government with nothing to hide; and that the filling of great institutions with supportive cadres is an act of life-enhancing pluralism.

You could argue that Fidesz is not intent on remaking the country in its own image and that its threats to criminalise the one ideologically opposed party, the MSzP - the socialists of the previous government, who are socialists about as far to the left as Tony Blair was - because they are ideological descendants of post-war Stalinists, was not an attempt to outlaw any thought that is not sufficiently right wing; you could argue that the police action of 2006 was the precise equivalent of the Soviet armies putting down the revolution of 1956 - an idea celebrated in one of the kitsch paintings already mentioned - and that whoever called the police out was therefore the equivalent of Mátyás Rákosi, the Soviet backed tyrant of the Fifties.

In other words you could argue that the attempt to deligitemize liberalism, tolerance, internationalism and replace it with an Eastern European version of the Tea Party with greater powers, powers sufficient to carry it beyond elections and to outlaw any opposition to the left of it, is perfectly OK.

I haven’t even mentioned the condition of the Roma, the criminalization of homeless rough-sleepers. There are many things I haven’t mentioned.

However you discount this or that element of the list, however you quibble about the precise reasons and mechanisms for this and that part of it, there is easily enough here to worry us, and for the EU to keep a very wary eye on.

The argument that ‘The members of the Media Authority are professionals; how they vote is immaterial’ is quoted from Professor Schöpflin.

I should add that I can link every one of those points above, but that, as I say near the beginning, it is the cumulation of acts and events that is my theme.

I felt obliged to begin with the first two personal paragraphs because the tendency is - and was in the debate - to equate the current government with Hungary and Hungarians. I don't believe that and wanted to make clear my love and respect for the best in Hungarian society and culture. It is sad that one has to do this, but nationalism is a powerful force that needs its enemies and prefers them to be presentable as being unambiguously biased and brutal.

It strikes me now, and it did at the time, that there was no discussion of the very particular circumstances under which Fidesz gained its great majority. The elections were free and fair no doubt, but the fiasco of the secret recording and publishing of previous prime minster, Gyurcsány's, behind-closed-doors speech to his party - the 'we lied morning, noon and night' speech, in which he also speaks scornfully of the electorate - was a very powerful factor without which the majority - in my opinion - might have been a lot smaller. A clear case of blowing off one's head by shooting oneself in the foot.

This post is long enough. I'll do just one more of brief reflections with some account of the questions in so far as I remember them.

Brilliant rejoinder to the notion that critics of the Hungarian regime don't put any detail on what they say!

I applaud you for taking part in such a debate!

Time and again I have encountered the same attitude from supporters of Fidesz - that anyone who attacks Orbán or the current government is attacking Hungary and is, by default, part of the international (Jewish) left-liberal conspiracy against the country.

It has only made me more determined to oppose supporters of Fidesz at every opportunity with logic, facts and robust argumentation.

I lived in Hungary for more than a decade, in which time I acquired a Hungarian family, learnt the language and came to love the culture of Hungary. It deeply saddens me that the country, about which there was much optimism in the mid-to-late 1990s, has sunk so far.