On a short poem by Esther Morgan 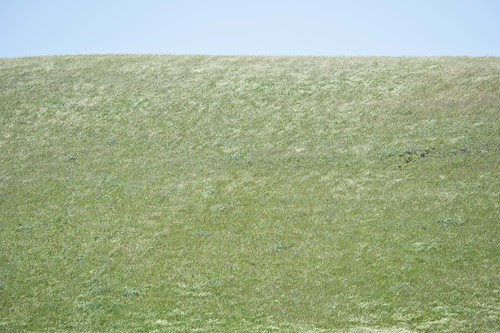 and the wind galloping hard over the fields
like a riderless horse.

It's a very short poem for a long holiday and it takes worthwhile risks. The risk isn't about loss of conventional punctuation, bar that isolated hyphen. We have an assuring capital letter at the beginning of the poem and an equally assuring full stop at the end of it with nothing in between. In that respect the poem locates itself among range of modern options. We are prepared for it.

There is no particular risk to the narrative or syntactic order. That is what the minimal punctuation says and we are in no danger of losing track of events.

The variance in line length certainly draws the eye in the contrast between the longest and the shortest but there are sound dramatic reasons for that, as there is for the stanza breaks.

The risk would seem to lie in the long repeated lines themselves. They take nerve because they risk accusations of both childishness and boredom. The obvious answer to the accusation would be that the poem is actually about childhood and boredom. To which the more refined second accusation might then be that the job of literature is to convey boredom without producing it.

Responding to the second accusation is the more serious risk, a nice bold risk. The lines are not elegant but they spring us into the last couple of lines where the specific image of the riderless horse is offered to us. The image comes as a surprise, almost a shock. The wind gallops before the horse does, partly because the horse does not exist except as a simile for the wind. Suddenly a day that stretches ahead is disordered by the wind.

The poem, we realise, is about the wind, its object, after the boring stability of the sea and grass, to place us directly in the course of the wind and its power to ride us down. The first five lines are there to prepare us for that.

And now the role of those long repetitious lines becomes clear. Their rhythm foreshadows the galloping. Just listen. The wind is  rising in them, and who would have suspected that the first time we heard them. Or imagined hearing them.

I have been thinking for some time now that the poem is, among other things, the physical embodiment of a psychological condition. The lip, mouth, tongue and throat shapes we have to make in order to produce the sound - and the sounds can come from half way down the throat, from right at the bottom of the belly, and involve pulling not just faces but the tightening or loosening of muscles elsewhere - are related to states of complex but primal feeling (so one can be afraid yet excited at the same time). In effect the sounds imitate instinctive body movements in particular states of emotion. The words have meanings and associations, but they receive their core energy from the body itself.

In this case - and I noticed this as Esther was reading - the appearance of the wind in the form of galloping horses was experienced with an unusual intensity. The poem had left the stable door open and the horses had rushed out.

Poetry is a constant struggle agains the merely literary. It is, of course, literature itself but it cannot afford to be simply literature. Literature has to discard something of its fine manners to address us in a manner beyond civility or even accepted modes of violence. Somewhere or other the stable door must be open and the horses galloping right towards us.

Morgan's poem does that despite its small, apparently narrow compass. It is short but its power is substantial. It is not just Poetry: it is a poem.

Thanks for this George. I'm well into short poems, as you know. Yes, the galloping, the rhythm of the repeated word pairs, and their reversal in the third line (like kicked-up divots) and the rhymes, especially the consonance/sibilance of grass/horse. Plenty of sky-grass to return and graze on, or gallop over. Lovely.

It doesn't have one memorable line, sadly.

Funny you should say that, Anonymous. I remember most of it. Can't you even remember the grass and sky lines?

Maybe Anonymous is a goldfish.