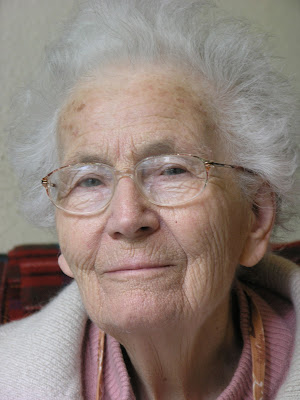 On Saturday we rushed down to the nursing home in Hitchin to see Winnie, Clarissa's mother. She had had heart failure, fluid on the lungs and a high temperature. In February she had had pneumonia and we were told to prepare for the worst within days, perhaps within 24 hours, but she recovered.

She recovered this time too.

She smiled when I talked to her and showed her photographs. She even said a few things that were genuine responses to prompts and questions and was perfectly conscious throughout, but her forehead was clammy. Clarissa and Hilary spent a long time talking to her. Then in mid afternoon we drove home.

Sunday was spent finishing some deadline work and preparing for Monday.

Monday:  Into university early for teaching then straight out to reading by Anjali Joseph, Hayley Buckland and Meryl Pugh at Cafe Writers in Norwich. Very good and good to see them. Home late, not much sleep.

Tuesday: Again I go in early to teach in the morning then in the afternoon I come home, change and catch the train to London for the Stephen Spender Prize Giving first meeting Ugandan-born poet Nick Makoha, whom I had mentored the previous year. Home after midnight, four hours sleep, awake for three hours

Today, Wednesday morning: Extra-day in university for two meetings. I come home to work after 2pm, have a hot lunch and do some work, then lie down an hour to make up for the previous night.  Not much sleep though. Just about to sit down for supper when there is another crisis in Winnie's condition. This time the nurses try to rouse her and she is not responding. We hang on the phone for doctors, nurses, family, half-packing the bag, checking the availability of hotel or guesthouse rooms, but now it seems there is no need to rush off. Winnie is responding again.

Clarissa (and I too) are against taking her off to hospital. Shuttling between ambulance and hospital, possibly with no bed available would be distressing for her. She is comfortable where she is, the nurses are very good. If this is the end it is a better one in a known comfortable place than in a cold hospital ward or corridor. But it might be just another crisis. She is a very strong woman.

But we might be rung tonight. It is very much knife-edge living for now.


In the meantime people are chasing me for deadlines, as ever. I usually meet my deadlines but they get pretty close these days. I make a lot of work for myself of course. People - I don't mean official students -  are constantly asking me to read their work, comment on them or give them a quote - and of course I do. I would welcome such help if I were them, and I am fortunate to be in a position where people think it worth asking me. At the moment I would say my time is 50% teaching and associated matters, 20% translating, 20% other things for other people and 10% for my own work.  I wouldn't say that is a lot worse than it has ever been, because my own work probably never added up to more than 20%, but it is not as it should be now. Fortunately I am high-octane and naturally productive in tight corners.

Nevertheless, I am not as young as I was and the teaching will stop.

Also, since I don't think I have said this here before, my next book of poems Bad Machine is Poetry Book Society Choice for the Spring. Hurrah! 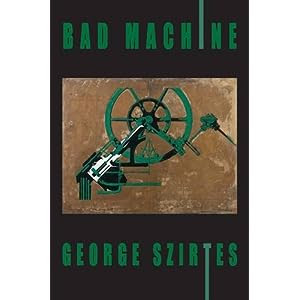 Bloodaxe. Cover by Francis Picabia. Due out 24 January, 2013

Sorry. Didn't log in. So rude to be anonymous.

Oh HAHA! the anonymous comment didn't publish! Pffft!
I think I said...
Good to end on a 'hurrah' and why stop the teaching? Is that the bit you don't enjoy?

I have always enjoyed teaching. The contact teaching is the least of it. But the work around it does take a lot of time and if I wanted to be a properly dynamic and effective member of the crew for the future of the course I would have to put in even more time. Besides, I will be 64 in two week and there are already grandchildren on my knee. Fortunately people still need me and feed me. But this semester is my last of class teaching.

Thank you for commenting.

George - so sorry to hear about your mother-in-law being ill - Clarissa must be worried. But whatever happens - I hope it is the best for Winnie and for all her loved - and loving - ones. These are never easy times, but they can't be avoided. As you know.

My thoughts and prayers are with you.

It is a difficult time, to be sure, this time of potential losses and transitions. But I'm glad to see that in the midst of it all you still have a new book coming out! I wish you and your family well.

George, if I may be so bold as to use first names though I feel we are good acquaintances now hopefully moving toward friendship, it sounds as if it is a time of transition in your life. Change being the only constant in life we move on from tier to tier hopefully informed by wisdom and accompanied by humor. I'm sure you will turn from the closing door of teaching to find something new opening ahead.

I am so sorry to hear your mother-in-law is going through a difficult time and pray for you, Clarissa and your family. I have to say I agree with your decision regarding the hospital. Comfort and consistency in routine are so important.

My mother was in her 70's when she died. She lived on her own in a small apartment, a quiet, caring and often surprisingly opinionated woman who I had the great gift of coming to know as a woman beyond my narrow child's perception of her as "mother". She died in the hospital after a heart operation which we all thought would make her life much better. My last memory of her is sitting in the chair in her hospital room, small, frail, handing her wedding band to my sister for safe keeping before the procedure.

Each passage is its own. I pray Winnie's is gentle and that you all have the chance to say the things to her and to each other that will leave peace in your hearts.

Thank you for sharing and allowing me to share in return. You are all in my thoughts and will remain.