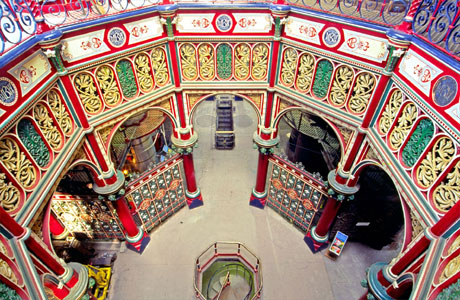 Stairs leading down to scene of crime.


No, you see, officer, I finally lost it while I was watching a television programme, Behind Closed Doors, about the insides of buildings you rarely get to see. I like architecture, officer. I can tell a Tuscan from a Doric, what is more I can tell a Corinthian from a Composite. I am a semi-educated man of good character. But I could tell something was wrong when a crack appeared in my forehead and my underpants caught fire. Normal middle-aged grumpiness, you think? But I murdered him, officer, that's the difference. The body? I'll tell you where it is in a moment.

There is a kind of disease suffered only by presenters on television, a version of St Vitus dance. They are seized by it the moment they appear. It is like convulsions, officer, but it goes with a voice. The hands make jerky movements, the chest heaves forward, the whole body buckles. The head lurches towards camera and the mouth opens to such a grotesque extent that you can see the tonsils dancing somewhere at the back of the throat. That is disturbing enough for persons of delicate sensibility such as myself. But then the voice. It cannot speak a sentence without exploding at least twice, with words like FANTASTIC! STUPENDOUS! JUST LOOK AT THAT! BRILLIANT! No, it doesn't matter what order the words come out or what the subject is. It is an earnest of enthusiasm.

The young man - Charlie Luxton I think his name was, though it hardly matters now - wore a sky blue pullover that changed into a red pullover then into a yellow pullover. I thought I recognised him from CRACKERJACK! but realised I had murdered the whole cast of that programme several years ago. First he enthused about the inside of a Dollis Hill bunker. He was in paroxysms about something. Was it the damp? The dark? Let it pass, I thought. Down, thou climbing sorrow, hysterico passio, down!

Next he was in the Queensway Tunnel under the Mersey, rapturous about the extraction system, about wheels going round (I believe that is the general character of wheels, officer) and pistons pumping (they do, in fact, pump).

From there he proceeded to a Thirties building, also about some mechanical business. It's all becoming a fog, officer. I'll spare you the details.

But what did for me was the Joseph Bazalgette building, the sewage treatment plant at Crossness in London. Magnificent, of course. I say it myself. A Victorian engine room in full technicolour, pumping away at the heart of empire, processing shit at the time of cholera and the great stink. It was a genuine item of steam punk, a cross between The Great Western, a Byzantine temple and a perfectly upholstered Gentlemen's Club. It had been tenderly restored. It was in full working order. A man like Mr Luxton shouldn't have been let loose in it. He was not a fit person.

If he had been delirious so far he was now utterly transfigured. St Vitus possessed him completely. The trouble with this form of possession, from my point of view, is that there is something quite exceptional to look at in the background but there is an afflicted idiot in front of it, constantly dancing, enthusing and bellowing, so you see nothing, hear nothing, except him.

Mr Luxton was allowed to pull a string that looked remarkably like the flush of an old fashioned toilet. A simple thing. On pulling it, a faint whistling sound was heard. I think it was this that finally unhinged him, as he did me. EXTRAORDINARY! he cried. UNSURPASSABLE! BLERIOT! STOPGAP!! CRUMHORN!!!

From there his attention passed to the number of flywheels, the number of stairs, and, lastly, to the sheer gallonage of excrement the thing could handle at one go.

WONDERFUL! STUPENDOUS!! BLOCKBUSTER!! STRAPPADO!!! TERRAPIN!!!! he exploded. THINK OF ALL THE TOILETS FLUSHING!!! MILLIONS OF THEM!!! ALL HERE!!!!!.

It was at this point I followed him down the stairs into - if you'll pardon the expression - the bowels of the building, my brow cracked wide open, my lower body wreathed in flames.

I killed him, I confess. I think I beat him to a pulp. I have a vague memory of flushing him away. That is where you will find him, officer, though, possibly, not in one piece.

I'll go quietly now. Here are the underpants. You may need them as evidence.