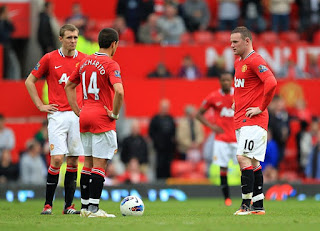 Well, no, I didn't watch it. Too painful. (Though I certainly wouldn't have left if I had been there.) And for all I know it may be a turning of the tide, but one match has never meant that, so we shall see.

It is occasionally salutary to be smashed like this especially after the way the season began when United were smashing everyone else, including Arsenal 8-2, which was a flattering score-line, though extraordinary at the time, and the 3-1 win over Chelsea which was also flattering. In the same way this 6-1 was flattering to City with its three late goals after 90 minutes when, by all accounts United were attacking, and after most of the second half where United had just ten men following a first half when United had most of the play. Nevertheless this too was extraordinary and shows what a strong team City have become.

The medium-term effect will depend on character and discipline. If that begins to go it might be that the title will slip away but we are not even at Christmas yet. In any case I have loved this team so long and have seen them relegated and spend decades as a minor act to Liverpool or Everton, so the last twenty years have been beyond my wildest dreams. Nothing will take that away, and a little humility is a good thing.

I suspect United will be pretty close at the end and that City will have their turn to fade. It's a good open season so far, and nice to see Stoke do so well, chiefly in memory of Steve, but generally because it is good that the unfashionable should prosper. That Mr Pulisball must be a decent manager after all, as is our Norwich man, Mr Lambert.

It has not been a football day otherwise but a stream of poems, like hailstones, coming at me at university.

My next radio jaunt is an essay on W G Sebald, to be recorded some time in the next two weeks.

"..I have loved this team so long and have seen them relegated and spend decades as a minor act to Liverpool or Everton, so the last twenty years have been beyond my wildest dreams." A side to United that's almost forgotten now, and those of us who were there when we were battling Coventry for that coveted 12th spot in the table are no longer believed. We don't exist, George, or so we are told by middle-aged men who, as boys, glory-hunted Leeds, and Forest, and Liverpool...

It was a bit distressing, really, to hear Sir Alex criticizing the team for continuing to attack at 3-1 down and ten men left: that's EXACTLY what you do. But I fear that Johnny Evans's determination to remain at Old Trafford is going the way of Kieron Richardson's.

Age will out, James. How many of us to have seen Georgie Best, with Law and Charlton. But also the sudden collapse of that great team - Best to drink, Charlton to age, Law to injury.

I think Ferguson wanted to avoid that kind of humiliation. One can stomach a 1-3, but not a 1-6. I don't imagine he would have been angry at them for too long. Yes, Evans is hanging by a thread. But there is a very good young team in the offing and if it means two or three years not winning the league every year but still in Europe, that is worth the wait. The key buys for City have been Silva and Aguero, but they too will hit slumps now and then. A week is a long time in politics but a very short time in football.