So it goes in Hungary: the fascist at Radnoti's feast 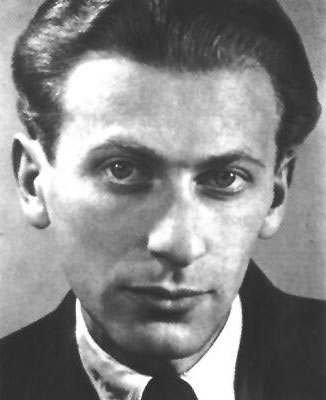 News of a cultural event at the cultural centre dedicated to the memory of the great Jewish Hungarian poet, Miklos Radnoti, who was murdered near the end of the war and buried with his greatest poems in his pocket. The house is in the old working class district of Csepel. The local mayor has arranged for a literary event devoted to the fascist writer Jozsef Nyiro about whom I wrote a couple of posts ago.

Radnoti remembers Nyiro in his 1941 diary. I translate from the website where the news of the event appears.

Confusion about Poetry Day at Weimar. The latest article says: The Third Reich has also arranged a Poetry Day in Weimar in which invited poets from the eleven Central and European nations will take part. Hungary will be represented by the Transylvanian writer Jozsef Nyiro. Nyiro in his statement to the press said: 'We are witnessing the spiritual rebirth of Europe. I, like the rest of Hungarian literature, am happy to be able to take my part in this spiritual development. Earlier in the church I saw a beautiful painting in which Luther is pointing out the verse in the Bible that declares that we will be washed clean by blood. It is blood that will cleanse Europe. The nations of Europe are discovering each other and drawing together in the name of peace, of soul, and of spiritual revival. I support this enterprise with my heart and soul. Long live Adolf Hitler! Long live Germany! Long live the German Society of Authors!'

Now, as I copy out the article on Monday morning 3 November I am left wondering. Is it by accident I don't have a single line of his on my shelves? Not even in an anthology...'


The mayor in question is a member of Fidesz, who claim to maintain a safe distance between themselves and the perils of an openly fascist Jobbik. In effect they are 'saving' Hungary from a fate far worse.

Big deal, you say. It's just an evening and it happens to be there. Very little 'just happens' in Hungary.  It is a significant gesture and there is no chance it is carelessness. What it says is: You think it's your house. Well, we're taking it over.

Quite right, this is an act of aggression.

The irony of it all is that Radnóti was so much more a "patriot", in the sense of those that love their country, than Nyiro ever was. Take for example his poem Nem tudhatom/I Know Not What. If I was born Hungarian I would want that poem recited at my funeral. And while my Hungarian is rudimentary at best, I am still moved when I hear Latonvits read this great work - see Youtube http://www.youtube.com/watch?v=UmKfNQd7zLM