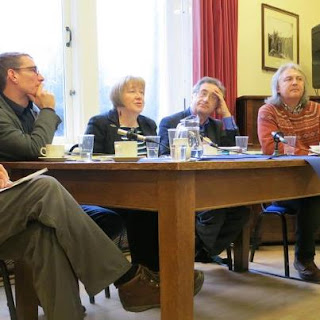 Photo courtesy Peter Daniels. You see Ken, Eleanor, myself and Chris at the breakfast


Ten days since the last post. In that time we have been to St Andrews for the StAnza festival, going up on Thursday and retuning on Sunday. On Monday I went into the university, on Tuesday it was London for a dialogue on translation with Rachael Gilmour at the OU, actually in Senate House at the University of London. Today I have been home reading, judging and writing the report for the Alan Sillitoe Open Poetry Competition.


1.
Events in Hungary have moved on, particularly in the light of the amendments to the constitution, voted in on Monday, by which all the objections of the constitutional court to the government's more harmful proposals are wiped out, as are the powers of the constitutional court. This time the world is looking and listening. So there are reports everywhere, for example in The Independent, The Guardian, The Daily Telegraph, The Irish Times, the BBC, The New York Times of course (with Krugman and the excellent Kim Lane Scheppele too), Reuters, The Financial Times (£), The Washington Times, The Christian Science Monitor, Der Spiegel,  Deutsche Welle, Fox News, Human Rights Watch, Amnesty International, and a great many links to more stories on Politics.Hu

This is no longer the Fidesz government's dirty little secret and I doubt whether accusations of 'liberal-left narrative' are going to stick against The Telegraph and The Financial Times.

2.
StAnza is a marvellous poetry festival, possibly the best of the big three that includes Aldeburgh and Ledbury. I may just be saying that because I have just returned from it. On Thursday evening I read with the Canadian poet Ken Babstock, a marvellously witty, knowing, tangential poetic intelligence. On Friday I took part in the breakfast discussing poetry as design with Andrew Roberts, Ken Babstock, Eleanor Livingstone and Chris Hamilton-Emery, going straight on to a round table in which I talk to a group of 12-14 people in a nearby art gallery (I talked about collaboration and tweeting chiefly) and at 5pm I chaired a reading  and discussion with the German poet Ludwig Steinherr and the Romanian Robert Serban. 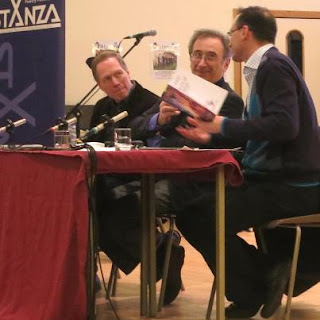 In between attended readings by Mark Doty, Erin Moure, Alvin Pang and Deryn Rees Jones, taking in Alvin on Wiszlawa Szymborszka and Zöe Skoulding on Lynette Roberts. After the evening reading we go for supper with Alvin and hi fellow Singaporean, Joshua who is doing national ervice and heading for a high political career. Then it's back for a drink at our The Greyfriars, a lovely friendly place.

3
On Monday straight from university (in Clarissa's case from school) to Cafe Writers to see Kerry Shawn Keys whom I had missed at StAnza, and his partner , Lithuanian poet, Sonata Paliulyte. Martin Figura teases me that I am too posh to do a reading from the floor so I stand up and do my translation of Baudelaire's Spleen which takes a few crude liberties with the original, all for the sake of art, naturally.

4.
Tuesday lunchtime down to the University of London for the dialogue with Rachael Gilmour, which is lovely, but not much detail for now. Rachael speaks first about the complexities of intralinguistic poetry in England, concentrating on Daljit Nagra. She is sharp, perceptive and reads a well organised and illustrated intelligent paper in a clear informal manner. I just speak from a relatively personal view. Daljit seems to be the post-colonial paradigm, I'm just an existential condition. I will say a little more about this because it is interesting material.


On Friday to Leeds.

I want to get back to this blog properly and will do so, it's just difficult trying to do everything at once.