The Guardian CiF article:
my sixteen minutes of fame
and the other seven million 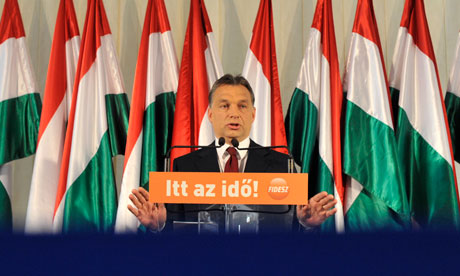 Those who would like to, may read my Guardian piece directly through this link. They get the comments there too. For others I paste the text here.

Among the foreign dignitaries attending Margaret Thatcher’s funeral on Wednesday will be a man who many would prefer wasn’t representing his country. But it will be a handy getaway for Viktor Orbán, an excuse for him to break off trying to defend Hungary’s new constitution from its EU critics, which include commission president Jose Manuel Barroso.

The bad press Hungary has been getting of late is the result of left-liberal lies. At least, that is what the current government claims. In fact, it argues, Hungary is a perfectly normal country going about its business. Criticising Fidesz, we are told, is an attack on Hungarians generally. Fidesz is, in effect, Hungary.

Of course these ‘lies’ have only been around since Fidesz came to power in 2010. The party’s landslide victory handed the new prime minister, Viktor Orbán, an opportunity to change the constitution. So what’s the problem?

The EU had three main ones: the new media law, the earlier obligatory retirement age for judges, and the independence of the central bank. It exerted pressure on Hungary and little by little these points were addressed — but the most recent amendments weakening the constitutional court have taken everything back to square one. The Minister for Economic Affairs is now the head of the central bank.

A catalogue of other changes worry Hungary-watchers, and Hungarians themselves. Most importantly, parliamentary committees have been filled with government supporters and their terms lengthened to well beyond the life of the parliament. Then there is the the ousting of prominent theatre directors; the scaling-back of the film industry; the smearing and demonising of internationally known figures like the philosopher Agnes Heller and the Nobel Prize winning author Imre Kertész; the financial starvation of magazines and radio stations, the purging of all dissenting voices in the media, the sackings of head teachers — and a great deal more. Women have been told to go back to the kitchen and have children. The party and its properly ‘Hungarian’ values must take precedence.

This goes along with a tolerance of the most savage anti-Jewish and anti-Roma rhetoric, particularly from journalist Zsolt Bayer, one of the founders of Fidesz and a good friend of the prime minister. In the last few weeks the government has handed out three major public awards to far right cultural figures. After some international embarrassment they withdrew one of them: the other two remain. And now there are laws that render rough-sleepers liable to prosecution.

Like all governments this one tells us that it is simply sorting out problems created by the previous one. But why, if so, has there been such a rise in the emigration of young, qualified people, particularly since 2010? There are some 500,000 of them working abroad by some accounts, about 100,000 in the UK. Fidesz is having to enact new legislation to deal with it.

The last year has seen the changing of the school syllabus to include pre-war fascist writers, and the raising of statues to Admiral Horthy, the inter-war leader who allied Hungary with Nazi Germany. Fidesz’s notion of national values — so easily ‘betrayed’ by those who do not share their political sympathies — trumps everything. Opposition exists of course, but the cultural and political ground is being cleared of such voices. The government is on a fast track back to the 1930s.

And the only story put forward in defence of developments in Hungary is that the picture painted of Orbán’s programme is distorted – all liberal propaganda. It’s a sign of weakness that the patriotism card is the only card they can play to excuse themselves, but you can bet your life that it will be played time and again.

At the point of writing this the article has had 159 replies. I have intervened three times, once just as a one line reminder of a rather good joke, twice in response to criticism.

I have had slightly more support than I expected for which I am grateful, if only because it shows some care more for the country than for Fidesz and its idea of the country.

The criticisms have essentially consisted of calling me a liar or some other bad name. That's perfectly fine by me partly because one doesn't go into CiF expecting a chorus of approval, but more importantly because the nature of the pro-Fidesz response is exactly as I suggested it would be in the article itself.

The most common mistake - in Hungarian translations of the article - is to misunderstand the very first sentence [as re-fashioned by the CiF editors, though I had no objections to their re-fashioning]. The translators think I said Orbán shouldn't be at the funeral. What the sentence actually says is that there are many Hungarians who wish it were someone other than Orbán going to the funeral (if any Hungaran leader was going to attend) - in other words many Hungarians wish Orban wasn't prime minister of Hungary.

Congratulations on joining the queue for your fifteen minutes of fame.
He tells me I should be ashamed of what I am doing criticising the Hungarian government and that there are at least three-million Hungarians who think like him.

This, my sixteenth minute of fame, is dedicated to him.

George, without wishing to sound too gushing, your work in translating Hungarian literature into English will give you fame long after you, me, and Orbán, have long shuffled off this mortal coil. Thank you.

Anonymous, thank you. That is very moving.

You dealt with the shouters in the comment stream perfectly George, by addressing the arguments (such as they were) rather than the shrill rhetoric behind them. You used those minutes well. In such instances, a sane voice sanely talking cuts through the babble and clears a space. Well done.

I should add: it was heartening to see that there were plenty of other sane voices too, part of that seven million who won't be easily silenced.

Thank you, Mark. This is one of those predictable matches. The last comment I read suggested that the Western media were anxious to reimpose communism on Hungary. That tells you something. And of course I myself am a faithful member of the communist party.

All this is both very funny and deeply depressing. Fortunately I am pretty well prepared for the comedy. The depression is on another level altogether, not at the level of the more asinine comments over at CiF.

Well done George. I read a whole series of articles from your blog a while ago after not visiting for a while and could hardly believe what I was reading, about the worrying and vicious trends in Hungarian political life, which in turn gives fuel, through an implied license, to the extremists.

It's not easy putting one's head over the parapet, but it's important to counter the Orbán PR machine.

Thank you, Looby. Much appreciated. I do get a few lunatics writing to me telling me I am a traitor to the country and a barefaced liar, though they never tell me what I am lying about.