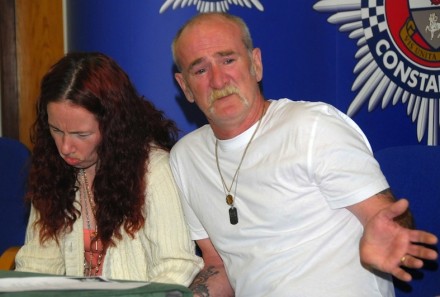 Having followed the press around the Mick Philpott case, via A N Wilson, and taking into account George Osborne's speech on benefits you'd think this country consisted of three kinds of people:

1. wealth creators (the very rich)
2. 'decent hard-working taxpayers like you' (the middle class), and
3. murdering polygamous scroungers living the high life on welfare, which is, of course, infinitely corrupting.

My first thought was that Philpott represents welfare in much the same way as Lord Lucan represents the rich and Dr Crippen represents the professional middle class. Let one man study medicine and you see where it leads? Medicine is infinitely corrupting.

But Osborne's speech made it all very simple because his proposed changes:

It is blindingly clear is it not? Wrong is wrong. All my life I have felt penalised because some useless unemployed layabout in a wheelchair was picking up benefit. This is clearly not the society I want to live in. When I wake up in the morning I want to feel happy and unpenalised knowing that nobody but me and the likes of me are picking up the dosh.
But I tell you what would make me really hyper-freaked-out-happy. It is the knowledge that a chap with a million quid bonus is being allowed to carry on creating wealth for me.
That's the world I want to live in.
Mind you, if the likes of Philpott carried on he'd be wiping out half the number of his children at any one time, thereby reducing his own benefit entitlement. And something about that feels so right in this almost the best of all possible worlds that I am not sure why A N Wilson failed to mention it.
But then Philpott might have done even better eating his children, which reminds me of a story or proposal elsewhere.
In any case we now have seven social classes so things can only get better and already have.

Thanks for putting into words the rage I've been feeling all day.

It is quite grotesque, isn't it?

One of the most balanced pieces I've read on this subject, and I've read a lot in the past few days.

I'm still making the psychological adjustment, having discovered that I'm one of the Precariat. Just didn't 'cut' it in the material wealth questions, I guess.

As someone else pointed out, the murder of the 6 children was nothing to do with benefits. It was his psychopathic personality. In fact, Philpott has the sort of egotistical, narcissistic and bullying character that performs well in the Boardroom. Just imagine, with a handful of GCSEs and a slightly more ambitious outlook, he could have been running a bank - or the Treasury.

And Osborne wants a debate - is there a voice of reason extant in the Commons?

Thank you George, I'm glad you mentioned Dr Swift. (I was wondering what was for dinner.)

Martin I came out in the Precariat too - though without changing any other answer, once I added 'hip hip' to my otherwise classical and jazz music tastes, they put me in Emerging Service Worker! Apparently there was a stereotyped age element to their algorithm... 'The most deprived group', eh.

I love the typo Katy. You can go from loving hip-hip to being a hip-hip Hurray Henrietta in one step. It is after all a classless society.

But yes, it stinks. It stinks worse than anything I have so far heard from the current government and its supporters. You can smell the corruption at the core of it.

This is THE fundamental philosophical and moral reason - should you need one - for rejecting the Tory argument. This is their world-view: this is the mind-set caught naked admiring itself in the mirror.