Tonight at Peter and Margaret's for their Mummers Play upstairs in the barn. It was only fifteen minutes but it had the lot: St George, the Dragon, the Northern Knight, the Quack Doctor looking much like Mr Pastry, and three or four others, including Master Scupham himself doing a good deal of growling. The costumes were gaudy, the stage simple. Wooden swords clashed and the core resurrections take place with the aid of quack medicine. The dragon was particularly charming and took just the right time to die and be resurrected. Honest rhyme took care to include specific local references and a collection went round in aid of the church. The audience, despite their evident respectability,  added to the raucousness. Subplots be damned, all plots be damned.  All was for the best in the best of all possible worlds.

The delight of such things lies in a firm determination to enjoy them and to do nothing by halves. Decking the hall with branches of fir, banging a drum, hamming, gurning and mumming are of the essence, the whole a carnivalesque answer to the pieties of the season.

There is something daemonic about the exercise after all, albeit in an antiquarian way. We know the Knights are childish braggarts, the swords are wooden, the dragon a kind of Pantomime Dame, the Quack Doctor a British cousin of the Wizard of Oz and that any Death present is sure to hurt no-one.

But it loosens the tight belt of reason a little: entering into a pact with the action we drop our critical faculties as might our trousers. It is paganism pretending to conform just enough for us to take the great red cross on St George's chest as a conventional nod to the God it represents. It would be interesting to see one of these as the afterword to a Passion Play. Maybe it has been done. I know little about the tradition but it would seem to fit.

Here is a Mummer Play script, not the one we had, but enough to give a flavour. 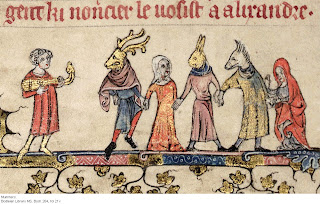 There is a mummers play that takes place on boxing day near here - in front of a cathedral - and I enjoy the juxtaposition of the pagan rites and the stone saints looking on. I once knew one of the morris dancers who also perform at the same event and so went to the pub with them afterwards. They then performed a modern mumming with the script built around a lambasting of Bush and Blair (it was at the time of the invasion of Iraq). It seemed to me that it was how it should be - a living tradition, irreverent and contemporary.