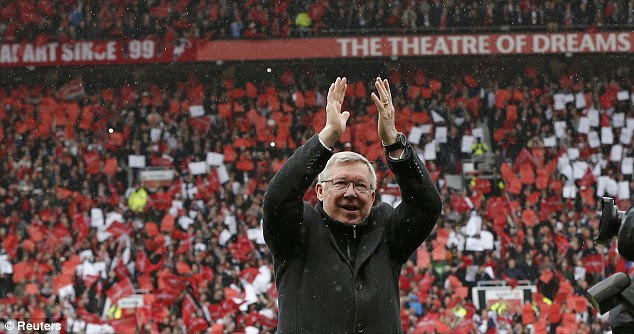 
It has been quite a year so far in both public and private terms. The death of Margaret Thatcher, the abdication of the Pope, and now the retirement of Fergie on the one hand and our decision to make this our last year of salaried employment on the other. Time's wingéd chariot is hurrying near. Eras are ending.

I will no doubt write more about retirement plans and what retirement, in this sense at least, might mean. I'll reflect a little on the years of teaching art, history of art and poetry. But that's for later. This is a football post and anyone not interested can stop reading here.

Though you might choose to wait because this isn't so much about football as about a team and what it means in a personal life that, I suspect, might be untypical. The truth is that I feel very deeply about this team and have done for over fifty years and would quite like to explain to myself not only why but why I haven't grown out of it. It is a romance that has gone on a very long time.

I have written before about my father taking me to my first football match in 1955 or 1956, the open terraces of the Népstadion, and the faint memory of the lilac shirts of the Újpest Dózsa team that struck me as somehow romantic, all the more so because the occasion was a moment of intimacy with my father and because it was among a large and potentially frightening mass of people. There is something raw and heady about a football crowd, as there is about any great gathering intent on an occasion. Even as a child you are aware of passions that seem to exceed whatever events are happening on the field. I felt them as an aspect of adulthood.

Soon after we left Hungary, came to England, found our first accommodation in London, and in all the chaos of adjustment I doubt I noticed anything much beyond the immediately personal. The big world outside, if I heard anything about it at all, was not my affair.

And then came the Munich aircrash in which  many members of a football team were killed. I hardly knew who they were but somehow I was aware that very shortly afterwards the same club, Manchester United, put out a makeshift team that succeeded in reaching the final of the FA Cup. This was the point I started following the story without knowing anything much about football. The makeshift team were defeated in that final of 1958, the United goalkeeper, Harry Gregg, being barged into the net in a way that seemed to me cruel. An aircrash and now this! I can't remember watching the match on TV. I don't know if we even had a television then, but it is as if I remembered it.


It was love I think, a strong sense of identification that demanded loyalty: it was the first thing in my life outside my immediate family circle that required such thoroughgoing, possibly eternal commitment. It's a commitment I have kept to this day.

The commitment wasn't related to specific acts of support, more to a web of complex feelings I didn't understand at the time,  an emotional condition with emotional triggers.


I actually started playing in 1959 while at primary school. I was quite solidly built for a nine year old and could run fast so the teacher in charge of the school football team picked me to play at centre forward. I don't think I had very much technical ability but I practiced hard in the playground and dreamt vainly of playing for England, vainly as I knew even then, because however good I was or could be, being born Hungarian, I was ineligible.

The school team was rather good and won a local schools cup in a final for which the teacher, a strongly religious man with a talent for  rousing public speech, psyched us up. We won 2-0 and I picked up a small medal. Not being a particularly social child, being part of a team and being awarded a medal, was my first social success. By the time primary school came to an end in 1960 I understood a little more about the game I was actually playing. I can still recall the sense of lining up on a pitch and running hard in chase of a ball. I can be that boy for a few microseconds of YouTube memory.

On 19 September 1959 my father took me to White Hart Lane to see Spurs play Preston in their change kit of dark blue and white. Spurs won 5-1. It was another moment of intimacy but less bewildering. I can see that fathers are going to be part of this.

I'll continue down this line as long as it interests me so that should take me a through a few posts.

I see that Paul Scholes is hanging up his boots and Wayne Rooney has the sulks. I wonder if Moyes can hold it together. Alex could charm the birds off the trees. And he never criticized his team. It would always be the referee or a bit of bad luck or even the wrong colour shirts. A veritable genius when it came to football psychology.

Yes, fathers. My own stepfather, of whom I was very frightened, was responsible, in the very early '80s, for all of the United matches I've attended. Thrilling, of course, to see Coppell, Jordan, McQueen & co. draw away at Leicester, but what sticks in the mind more is that sense of "being among the men" which all boys yearn for,and that smell of cigarettes, sweat and beer. The silent car journey to and from: the exotic walk to the ground: the stalls and the post-match Pink. And the fan violence during the game, because this was already a burnt-out, washed up sport, not the golden age fools reflect on. Before the end of my teens, too, the stepfather would be gone. I've never seen him since.

Burnt-out and washed-up are pure film noir qualities. I rather like them. There never was a Golden Age though some years and eras were rougher than others, though those years were not in the least dissociated from the state of affairs outside football grounds. Among the men? Yes, quite.

And Moyes will have a hard job but I'm rather looking forward to it. It will be a new adventure and if it sturtters at times that's part of the long story, not just the last twenty-six years. The younger supporters will have to get used to mortal frailty at times. They won't like it but that's part of growing up too.