Goodbye Fergie 5:
Decline and the Father 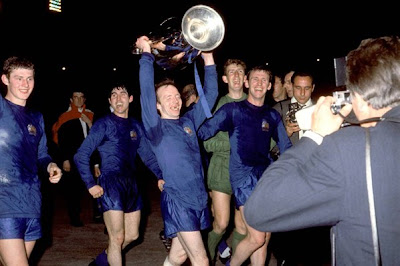 - Wallace Stevens, from 'Thirteen Ways of Looking at a Blackbird'


Frankly, I don't know either.  The apotheosis of the great mid-sixties team was the 1968 European Cup Final in Wembley against Benfica, a match I watched live on black and white TV. United won 4-1, which makes it sound easier than it was. The match went to extra time, the performance to catch the eye was that of an almost unknown, twenty year old John Aston, whose first and last hour of glory it was, who had the beating of the Benfica full-back and outshone Best on the night. Law was missing through injury as he was ever more to do, and the other new boys were Brian Kidd, just nineteen at the time and David Sadler, then twenty-two. It seemed like dawn, but really it was the last brilliant blaze of glory before dusk and a fast approaching night. I am including an old clip of the transmission that I actually watched full and live, with the Kenneth Wolstenholme commentary.

Looking at it again, I imagine United in the beautiful dark blue they actually adopted for the match,an even-handed necessity since normally both United and Benfica played in red, so Benfica wore white. I notice how clean the match is, that there is no rolling about pretending to be hurt. There is little cynicism at all. Great players make mistakes. Best wags his finger at a Benfica defender and the great Eusebio applauds Alex Stepney's save.

Football, like any game, thrives on anxiety and disappointment. It was tense until the third goal. The relief and overwhelming joy at the fourth is the reward for your anxiety. No anxiety: no excitement. No danger of loss: no drama.

Loss was to come. The next season was one of great disappointment. Best, Law, and Charlton had all reached their peak. Stiles and Crerand were near the end of theirs. The hoped-for youth did not mature as hoped. Brian Kidd, the greatest one available, did well enough but Best was getting bored and moving beyond control. Being spat on and kicked by the Estudiantes player in the World Club Championship, then getting sent-off for retaliating, cannot have helped, but it was just another thing. He was falling off the edge of cliff in his own spectacular fashion, brilliant as ever, but deadly bored. The team finished eleventh in the league. Thing were falling apart. Matt Busby, now Sir Matt Busby, retired at the end of the season. 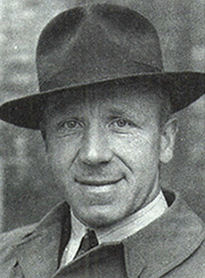 Boys naturally identify with other boys, generally older boys. The great footballers of the team you support are your wonderful non-existent brothers. They complete you when you are feeling at your least complete. You need them as you struggle past your parents, especially beyond your father, who, by the time you are eighteen or nineteen, has begun to take on the appearance of an old man. He is no longer the authority he might have been when you were ten or eleven.

That is if you have a good father. Mine was very good, but neither he nor I could prevent the withering of his power, not in my imagination, nor in our family life. Such withering away may be temporary. Time, as it advances, offers a more charitable perspective. The father becomes the man and it is as if he were growing into his earlier self, assuming a diferent kind of independent stature, as mine has done.
If the successful players are your shadow brothers, the manager, especially one as venerable as Busby, is your über-shadow father. His age peaks in wisdom, and the hard lesssons of his life (a suffering you eventually recognise) offers the hope of survival and transformation.

So with my father, so with Busby. Busby was the man who built Manchester United as the major force they had never been before the war (how hard it is to consider that possibility!) He survived Munich. He lost the best part of his team, effectively his sons, and he built again, with one surviving son, Bobby Charlton; one natural son, his fellow Scot, Denis Law; and his genius prodigal son, Georgie Best. He was "like a father to them". He had the benign fatherly look and a quiet, almost classless yet working-class Scottish intelligence and unforced authority that differentiated him from the English crowd that flowed around him.

He was like my own father in many respects, but more competent, less nervous, less vulnerable, more effortlessly potent. He was not a grand strategist, not a technical chalk-board theorist.  He healed and encouraged - as I imagined, as we probably all imagined - by sheer presence.

I watch Charlton score the first United goal in that European Cup Final. A moment of elation but no acrobatics, no piling into a crowd, no embracing, just a turning away and withdrawing into self, into further effort. The rejection of egotism. The good son working for the good father.

But then the good father goes.