21 October
5pm, the first day in Yangshuo and the sun is out. Rivers, rivulets, ponds, rapids down which bamboo boats carrying tourists, dip and right themselves. A large carp in a tiny pond. A big black butterfly the size of a small bird, flittering round near the hibiscus. Above us those extraordinary limestone outcrops, karst, clothed in trees but revealing sheer rock faces, scarred and holed. It's about 25C. We are all getting acclimatised. I wrote for an hour or so this morning then lay down and fell asleep. Then we had a short walk in the heat.

Tonight the formal welcome dinner, outdoors on the terrace.

Air-conditioning.
Outside, the mountains blunted
by the soft darkness.
*
We are all alone
in the spaces between words,
in breaths, in commas.
*
Before early dawn.
The vast terrain of China
as dark as the sea.
*
One bad sentence ruins
the book, he says, our young aesthete,
breathing the night air.
*
Everything passes,
says the clock but nothing does,
nothing quite passes. 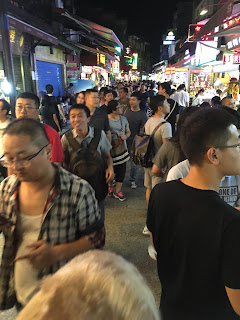 22 October
Last night a walk round the city, Yangshuo County. Buzzing and crammed, the main shopping drag packed solid with shops and stalls, blaring music, often live, with some demonstrations of crafts, a VR lounge, bars, the music mostly westernised as are the clothes, a mixture of China and America (call it Chimerica) but with an air of Kuala Lumpur meeting Grafton Street. We sit in a bar and drink a beer, are photographed as amiable curiosities. Boy sings Chinese pop-ballads feelingly to a guitar.

Have sketched two poems, written a journal and added to the book about my mother. Clarissa painting.

HOMAGE TO SVETLANA BOYM*
‘The Future of Nostalgia’

The future of nostalgia was resolved.
We’d had enough of it. No more dreaming
of grandad’s underpants or mother’s bra.
It was the end, there was nothing worth redeeming.

This was Chimerica where everything was trade
and free as air, the air of yesterday.
Nostalgia was the present remembering itself.
The present was past and wouldn’t go away.

Lord, let us live in a shower of cheap light.
Let’s trade our bodies as once we traded fur.
Let us be lost in streets without a map.
Let’s be ourselves by being who they were. 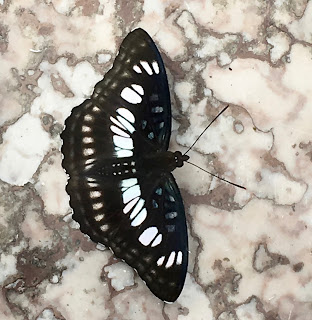 22 October
Off air much of yesterday. Took an after breakfast walk while it is relatively cool down the cycle path. Tremendous variety of butterflies from the bat-sized blacks, to smaller by still large blacks with brilliant blue flashes and still others blacks with white fine brocade edging. Also copper coloured ones with delicate patterns, some some yellow ones like Brimstones, and a few tiny whites.

2
if you are the ghosts
of the river, the river
must be in mourning

3
sinister as bats
in a movie, you reveal
nothing, hide nothing

5
troubadors of night
where are your instruments. your
inaudible songs?

6
see the hibiscus
thick with black hordes. is it death
that you are bringing?

7
such variations
on one simple theme of black,
spots and striations

8
could you be the soul
torn loose of flesh, set to dance
to no clear purpose?

9
wholly enviable
condition to be alight
without pain or grief

10
a grand finale
of black butterflies, the rain
jewelled, falling.

The bamboo boats come in flotillas, essentially punts propelled by pole. They descend the miniature rapids and right themselves. Small zebra-striped fish dart and hide in the clear shallow water of the river. People pass on electric mopeds.

Work for the rest of the day with a break for lunch at the nearest restaurant, down the path, just a couple of minutes away. Interesting to hear the female writers speak in defence of boys and men. That would be counter-revolutionary talk in the U.K. But they have sons and worry about them.

More work, then dinner at the second restaurant along where they speak some English. It isn't a group arrangement but we are all there so it feels a little more formal but the conversation is very relaxed.

We walk back in the dark. Little or no reception. Maybe it's better in the morning. 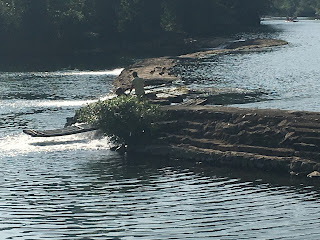 Yangshuo sounds fascinating. Our son taught in Yangshuo for six months and shared some photographs. I've shared your blog with him. This opens up the place in so many different ways.