24 October
Yesterday a longer walk in the morning up to the bamboo raft station. The river is shallow in places, only calf-high but the rafts can only go one way, with the stream. When they get to the their destination the rafts have to be loaded on to trucks, the tourists on to a bus and the staff onto a smaller bus and they return by road. Meanwhile the great black butterflies with blue spots of startling luminosity, and others, the coppers, the brimstones, the tiny whites, and the black and white ones like a dedicated bunch of Newcastle supporters.

We take a quick shared one course lunch at one of the three restaurants, after which I speak to my student translators who come with questions - they are all sweet pretty student girls - then return to work followed, in my case, sleep (another heavily broken night) before going with the others to Yangshuo to see the great show directed by Zhang Yimou, who orchestrated the Beijing Olympics in 2008 and won a Golden Bear for his work in film.

In the event it was a marvellous spectacle of a little over an hour, enacted on the river, to a vast Chinese audience, with a cast of hundreds, mostly local people in magnificent costumes. It was a little like watching the Olympics opening ceremony, breathtaking, beautiful, costumes in gold, in silver, in blue, a cast of a hundred peasants rowing through red silk waves, an enormous moon with a woman dancing on it, a pair of lovers meeting, countless figures perfectly choreographed to music now traditional Chinese, now very western cinema track - and all this with a range of the real illuminated sugarloaf mountains behind as backdrop. Individual figures were tiny, even from where we were, which was only some seven rows from the front. It was the individuals that carried the story - something about love and the masses and the nature of rule as I understood it - but apparently the story is hardly there anyway though there are references to stories already known in China.

I am very glad to have seen it especially in the circumstances of a hot autumn night in a crowd of spectators that looked chaotic but very quickly assembled in their numbered places. 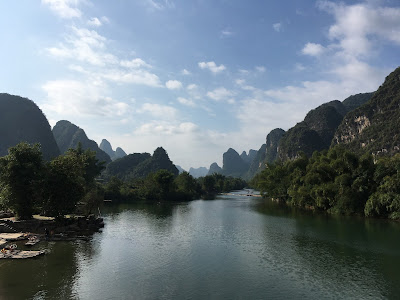 The more picturesque
the view, the more a picture
of the real picture.

Here is the picture of a spade -
I'll dig with it.

26 October
Being in a hurry to finish the post before setting off on an hour and a half's bus ride to Guangxi Normal University, I forgot to add that after the Mountain Songs we all went to Cloud 9 restaurant and the singers came with us still in their full costume. We sat in groups around tables with the usual Lazy Susan in the centre while two of the female singers sat at each table. The princess and her colleague sat at ours and continued improvising, singing us welcome songs, but also with impromptu songs addressed to us individually. They toasted us by offering us a slice of orange then later by clinking tea glasses. In real life they work on farms and in shops. Merlinda, the Philippine-Australian poet sang them a song back in a beautiful low alto voice. We also said goodbye to the students who have been accompanying us and welcomed some new ones.

Back at the hotel/centre for an hour or so then the bus ride to Guangxi. A guided tour of the university, founded in the 30s, but with a lot of ongoing building. Walked through the stadium with lots of student runners and joggers, through orderly ranks engaged in group physical exercises, and another group grasping large red fans.

The reading to a very full class in a very well equipped congregation hall. Fascinating to listen to three of our fellow resident writers, Larissa, Daan and Ravi. The first time we have heard each other. I read on 6th November in Guangzhou. Afterwards a tiny girl student comes rushing up. You look like the BFG, she giggles. You all smily. I decide to take it as a compliment.

The drive back suddenly hits a wall of fog. Soon after, a truck going down the wrong side of the carriageway comes right at us, braking just in time. 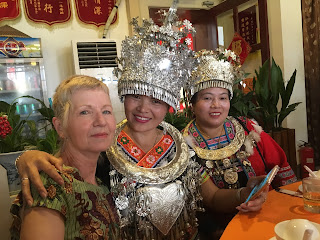 27 October
In which the internet packs up for a few hours and we find that everyone has gone off to a restaurant we don't know, as a result of which the staff offer to run us out there on two battery-powered motorbikes and we ride pillion, without a helmet of course since I have not seen one helmet in China, up the dark road to the place where the others are seated round a table outside, but we are fitted in and join the food melée while making civilised conversation after which we walk back down talking and talking and getting back and having a beer and talking until a big spider appears on the ceiling when two of the party leap up in panic and scuttle spider-wise off to bed.

Otherwise quite a lot of work done during the day and a filmed interview answering two questions in the afternoon, the first about multiculturalism in my own work and the second about the place of research in writing poetry.

We both enjoyed the motorbike ride. Perhaps we should get motorbikes. 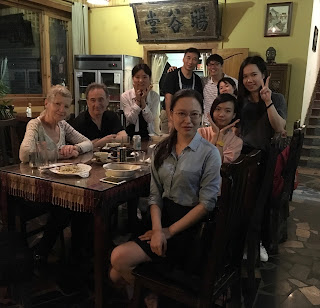