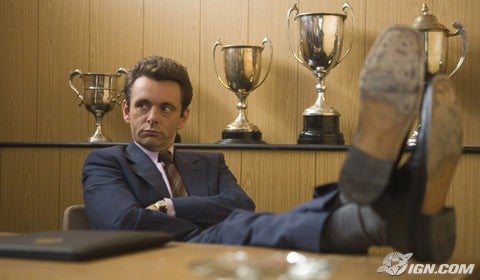 I have already written about David Peace's book, so I didn't really fancy the film, but I think the film is better. Not that Peace is a bad writer, it's just that the mind that conceived the book, as evidenced by the book, seemed to be too keen to impress and sound tough. Sounding tough is no better than sounding fey, and I didn't feel I had any insight into either Brian Clough or into Peace's character ' BrianClough'. He was unbelievable as what he was supposed to be.

The film however does present the viewer with a believable human being. Some episodes in the book are wisely omitted -the smashing up of Revie's desk for example, which might have made a spectacular scene but which the director, Tom Hooper, and writer, Peter Morgan, presumably recognised for the melodramatic touch it was. On the other hand the omitting of the early book episode where the young Clough's career as a player is finished by injury did remove an important aspect of the character's development, and its replacement by the perceived snub of Clough by Revie doesn't quite serve as motivation. Yet Michael Sheen's 'Clough' is a human being, now petty, now grandiose, now magnetic, now lost, not merely the projection of an idea. The relationship with the Peter Taylor figure (the excellent Timothy Spall, naturally) is touching and funny, and while not necessarily representing the relationship between the real Clough and Taylor, it is believable (just about) on its own terms.

The film isn't sentimental tosh like Looking for Eric (see below) but I did wonder as C and I watched it, whether it was sufficiently interesting for her as a film. She likes football, watches it, genuinely appreciates it and has memories of Clough, but all the same I suspected that interest in the film as a representation of an actual Brian Clough was probably greater for me than for her. Women are generally off-stage in the film. We glimpse them as firm matriarchs but they have no effect on the action, which lies entirely outside their sphere. In Looking for Eric they were adored and idealised: here they are pretty well absent and the men are not even sexy. It is more biff, beef and boot than Posh and Becks.

The trouble for me was that the real figure behind the film actually dominates it. We never see what made Clough successful nor why his relationship with his players worked, and without some treatment of this the figure must remain a little thin. What is a leader? What is it to be led? What is a team? What is team-spirit? What inspires? What is the blend of rhetoric, example, intimacy and distance that produces something extraordinary and coherent out of the ordinary and incoherent. These are political and military matters and, historically, more in the masculine than in the feminine realm. It is not so much a matter of empathy or even character: it is a matter of mechanism, that which works, which is like a machine. The sheer curiosity of it. I missed that.

That may be too much to hope for. Each medium creates its own reality, and one has to let go of the thing represented and concentrate on the presentation. The reality is that Clough would have been just an interesting but unimportant man if he had not succeeded spectacularly as a manager. The presentation was of an interesting man who happened to be successful at something that was not interesting as a mechanism, which resulted in a good, edge-of-anorak film. But it wasn't the anorak, it was the boiler suit I wanted. And I suspect there would have been real dramatic potential in it.