Caring: welcome to UK / Girl on a Motorcycle


Friend of ours in London, about our age, maybe a little younger, a very beautiful, highly intelligent, lively, kindly woman, who has been painted by many artists. Her foreign mother has dementia and is entirely incapable of looking after herself. Friend brought her over from abroad so she could care for her. She herself was born here, is a British citizen (since what else would she be?) Mother had lived here for years.

Our friend was an art historian, lecturing here and there. She sometimes wrote articles. Her flat is full of books, piled in columns on the floor. The flat actually belongs to her son now. Her ex-husband is elsewhere.

Our friend receives £60 a week as pension. She also gets £50 a week as carer for her mother. The local private nursing home charges £600-750 a week. The unenticing council home charges £400 a week. Mother being foreign she can't get a place there. Friend can't get out of the flat because mother can't be alone. The ceiling of the bedroom collapsed and the flat flooded a little while ago.

You wonder what the council does for £400 a week that she is expected to do for one-eighth the amount? 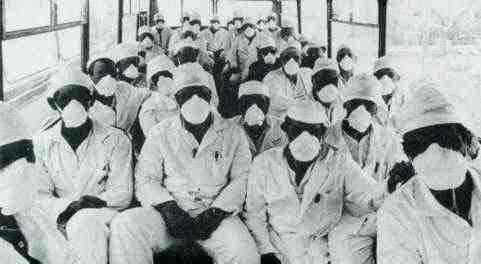 Another friend, The Plump, has a marvellous post about a Ukrainian girl on a motorbike. ""Good girls go to heaven. Bad ones go to hell. And girls on fast bikes go anywhere they want," she says, and where she wants to go is the ghost town of Chernobyl. Originally this is Will Popinjay's discovery. But you'll find it over at The Plump's, here. Go, as he advises, right through the photographs and texts.


*The motorcyclist's own text. These liquidators are going to their deaths.