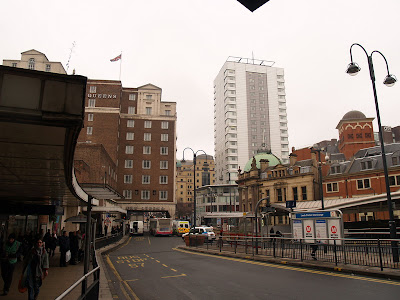 Very little sense of recognition in Leeds. There has been a lot of building, of course. The city is heavily scored through with dual carriageways, so it felt oddly disturbing, as though someone were always putting an object or an unexpected space in the way of something familiar, glimpsed, then disappearing. I wonder how far geographies are imprinted on the memory? When the imprint is altered the experience tends towards dream, and it was a little like that.

At the station I was met by Michele and Wes who led me to a drink in a covered mall-like yard with various cafes. There Wes and I talked wrestling. It turned out his father was a professional wrestler - Wes produced a photo of him with vast shoulders and extraordinarily narrow waist, a body-builder c.1970 shape. He himself is writing about American wrestling, which is so different from the British now.

It was about all these things at different times, in the face of which the panel produced a remarkable - apparent - consensus. Any of these aspects could have taken up the entire time, probably usefully, but because I, for one, hadn't really grasped which of these subjects we should be discussing, or rather what was starting point and where we might go from such a point, I myself was at fault for blurring whatever there was that might have been sharp. And since I was the first speaker my effect will have tended to start the muddle. Mea culpa.

Afterwards, some ten of us headed off to the vast, many-roomed pub, where a certain amount of alcohol was appropriately consumed and a number of interesting debates were started, any of which might have led us straight back into the Salon but for the fact that the audience had gone home. We were at the pub till closing time, the last to leave, and, not having eaten, three of us - Michele, Ronan and I - our young poet and fellow panel member, Andrew, having left - looked for a late night take away and eventually found a simple, very basic Indian restaurant that was still open. Eventually Ronan and I were delivered to the hotel. It was about 12:30. Straight to my room but still awake for another half hour or so, but woken before 5am then walked the twenty minutes or so to the station.

Thinking back to the panel and the whole visit it is as if I had been walking through a dream landscape. Panels are notoriously hard to focus and this was particularly hard. I suppose one of us should have supported the ban on the poem, but since I was one of the signatories against the ban it wasn't going to be me. Nor was it going to be Andrew, and, frankly, it wasn't going to be Ronan and Wes either. Since it was Michele's petition I had signed he wasn't going to oppose himself. So what shall we talk about now? Which is how we finished up talking about all those things at once. Michele is a kind of libertarian, so I think Frank Furedi must be his man, but if he writes to correct me, I will offer him this blog space to locate himself as he best sees fit.

I propose a balloon debate in which I get to defend Mary Whitehouse. Or the prosecuting counsel in the Lady Chatterley case. Well, at least the Lord Chamberlain. I must purchase some green ink and a wig.

Tomorrow to London to continue clearing up dad's things. Out in the evening. The next day to Cambridge for a six hour stint for the Poetry School. If I am tired now I wonder how tired I will be by Saturday night?

geography being imprinted brought to mind a Carol Ann Duffy poem "The Map-woman" (from 'Feminine Gospels') in which a woman's home town is imprinted on her skin. Over her breast was the heart of the town,/ from the Market Square to the Picture House/ by way of St Mary's Church, a triangle/ of alleys and streets and walks, her veins/ like shadows below the lines of the map, the river/ an artery snaking north to her neck.