Hungary & the closing down of democracy 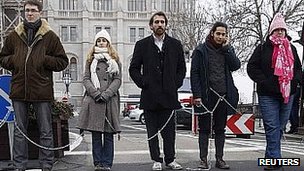 "Democracy ends in Hungary today," LMP deputy Benedek Javor told the BBC, before he was taken away by police.

The opposition objects to key laws on elections, taxation and the central bank, set to be adopted by parliament.

They say the laws will tighten the ruling Fidesz party's grip on power.

The parliament approved several government-proposed changes to the central bank bill on Friday to address the criticisms, Reuters reports. It is set to become law next week. (BBC)

After the various curbs on press freedom, the demonstration was not merely about the closing down of the greatest remaining opposition voice, Klubrádió, but it certainly offered a focus.

Hungary doesn't have a long tradition of democracy and the fingers of government, and most particularly the present government, Fidesz, are never too far from the trigger. With the closing down of Klubrádió the safety catch is well and truly off and Hungary has entered the next stage of its shift towards authoritarianism and dictatorship. The main opposition in parliament is currently Jobbik, the equivalent of the BNP, so it is not difficult for the prime minister, Victor Orbán, to push through legislation to silence the left and left-of-centre as effectively as possible.

The parliamentary balance being as it is Fidesz has hurried to change the constitutions of the major civil bodies, appointing its members and supporters into long term positions extending well beyond the life of the parliament, so that even should Fidesz lose an election the incoming government would be rendered ineffective.

Hungary has a highly developed, liberal intelligentsia, as well as a decent-sized liberal working urban population that finds itself less and less able to voice its opinion. Klubrádió was an important outlet for such opinion so it had to go.

What is also worrying is that young people in neighbouring Austria are turning in considerable numbers to the right wing (some say, far-right) FPÖ. It seems that 42% of the under thirties support it. (See page 2a here) Thanks to Poet in Residence for the link.

The old Austro-Hungarian Empire is gathering its ragged robes, adjusting its crooked crown, and priming its beer halls.

There is a petition to support Klubrádió here with my own statement. Írd alá a peticiót on the left means 'Sign the petition'. I have signed it and have put links to it on both my Facebook page and Twitter. If you care about such things, do sign. The Facebook link carries the following translation of the text of the petition:

*Say No to shutting down Klubrádió*

The panjandrums of the Department of National News and Media led by Annamaria Szalai have obediently followed the instructions of the Victor Orbán regime to close down Klubrádió, one of the last bastions of the free press in Hungary.

The Orbán regime wants to silence all dissent and clear the way to building an autocratic system of government free of all criticism.

We will not yield to the absolutes of power. We will raise our voice against the new despotism, Let us all say NO!

*I am signing this petition to protest against the shutting down of Klubrádió.*

I have a put a link from my blog article to yours.