Music from China: Bring on the Girls

We saw gardens, we toured in boats, we explored famous houses, were shown rooms not open to the public. Our guides were beautiful with beautiful manners and beautiful clothes. It was all beautiful. But it is the music I will take away with me. First there was the master musician in the small room with its cups of hot green tea (see previous video clip), then ever more music and singing as we went along.

The strictly unofficial Red Bridge Autumn Ceremony takes place near the Red Bridge itself and involves flowers and the reading of the classical poem to celebrate the Slender West Lake. Both P and I had been put to translating it - only four lines, but heavily rhymed, with seven characters per line, which could be translated as seven stresses in English terms. The poem was read, and P and I read our translations while clutching little bouquets of grass. Two beautifully dressed, beautiful girls performed a lotus petals ceremony. People sang, then off we went on a boat trip to another garden and another mansion, a special guided tour with more zither music on the boat. We cruise along the Slender West Lake past banks of bamboo, past willows, past little islands and moor at another formal garden built by another rich businessman. Rich businessmen seem to have built everything. A beautiful girl gives us a beautiful tour that ends up in a high pavilion overlooking the lake while more beautiful girls in even more beautiful costumes play flutes and lutes and zithers.

Beauty - visual, philosophical, aesthetic and downright decadent - is clearly a central issue in the culture, especially if one has the means to indulge in it. The rich have the means. The emperor arrives on a visit and remarks how fine it would be to have a pagoda. No problem, overnight a new pagoda is raised. There are rainbow bridges, straight bridges, step bridges, screens, calligraphic inscriptions everywhere. Occasionally I feel I must be a residual puritan, but, for heaven's sake! It is undeniably beautiful. The art of the Chinese garden is complex, involving rocks, plants, water, air, time, habitation, poetry and philosophy. I have no wish to be facetious about it. Beautiful is what it is.

The poem itself in my translation

An avenue of willow trees where green patches remain
The picture of a rainbow bridge, wild geese in one sharp skein,
The gold melts in the crucible, finds its lost domain,
And so the Slender Western Lake receives its given name.

The curious technical feature is that, in Chinese, there is a mass of material squeezed into the first two lines and practically no material in the second two, so there is abnormal strain in keeping the balance. You have to contract and expand without looking as though you are doing it. The form uses full rhyme. It is not by any means a great poem. It is conventionally picturesque, the gold in the third line refers to the actual discovery of gold near the lake, and the 'so' in the last line is a false link between the gold, the picturesqueness, and the name, which is in fact simply a description of the long narrow lake to the west of the city. But there it is. It matters because it is a focus for celebration. 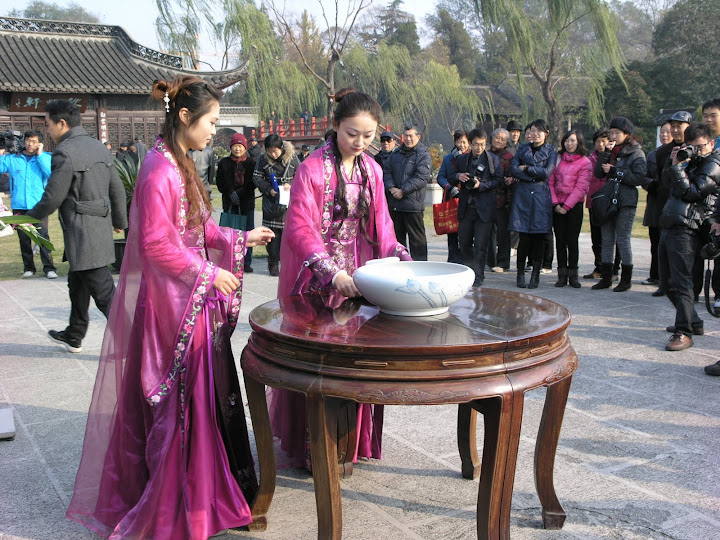 As for the beauty and the girls? Yes, the Yangzhou people tell us, Yangzhou is the city of beautiful girls, which may well be the case. Being decorative, entertaining, exciting and soothing to the male spirit were the vocations to which many girls, from high birth to low birth, were trained. A little more from the Notes then:

Next day, Sunday, to the mountain top, though it is just a gentle hill that feels a little like a mountain because the area around Yangzhou is flat. The cabin at the top was visited by the Chinese equivalent of the Emperor Nero, who buried hundreds of girls in the valley, got beautiful girls to carry his boat when the canal ran dry, and changed the examination system. Yangzhou is famed for its beautiful girls. Some are in the valley.

Go and ask Robin to bring the girls over / to Sweetwater, wrote John Crowe Ransom in Vision by Sweetwater ending: Myself a child, old suddenly at the scream / From one of the white throats which it hid among'

ps Go to Pascale Petit's blog for great photographs and fine physical description. We did after all go together as the two UK poets. I tend to do too much thinking and not enough describing - she has a terrific eye.

pps I am now on Twitter. You can find me at @george_szirtes

The beautifulness was overwhelming wasn't it? Particularly of the girls. I like your thinking George, and read your blog for that, thanks for the 'eye' and link. Good to hear the music again, somehow it never occurred to me to video it. I like what you've done with the poem. I'm still tweaking mine.

Overwhelming indeed. The link is permanent now in the margin. I don't know why it wasn't there below. I just forget to change and add on things after a while.