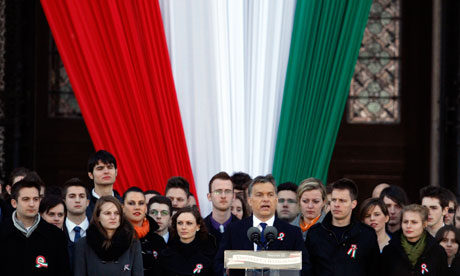 15 March in Hungary celebrates the outbreak of the great 1848 revolution that was crushed the following year. The revolution, like all the European revolutions of that year, was a complex mixture of nationalist and internationalist passions. It certainly wasn't 'Christian' any more than were those of the French Revolution. Like all revolutions, once past, it remains up for grabs for anyone unscrupulous enough to claim it. The equation is: Those heroes were like us and wanted what we wanted, therefore we, and you, dear audience, are heroes.

Victor Orbán has once again claimed that revolution.

In 1988 people who tried to lay flowers at the statue of the revolutionary poet Petöfi in 15 March Square were turned back, arrested, or beaten by the police.

The next year I was there as were hundreds of thousands of others: it was the first great public event in the toppling of communism. The revolutionary moment was open.

Now it is closing.

This evening the Prime MInister, Visitor Orbán made another revolutionary speech, one very much aimed at the home audience.

As the Guardian reports in the link, he:

...delivered a stinging broadside against Brussels on Thursday, likening EU bureaucracy to Soviet tyranny and casting himself in the mould of Hungarian heroes fighting to free the country from foreign domination since the 19th century...

Drawing a clear parallel between Soviet domination of Hungary until 1989 and the behaviour of the European authorities, Orbán said: "We are more than familiar with the character of unsolicited comradely assistance, even if it comes wearing a finely tailored suit and not a uniform with shoulder patches."

I note how the government constitution, that was not the subject of the vote at the general election, is now incorporated into the idea of Hungarian nationality. In other words it wasn't Fidesz's constitution, but the people's. The constant identification of the government with the people is a vital trope for Orbán.

The fighting talk goes on:

...we decide what is important and what isn't. From the Hungarian perspective, with a Hungarian mindset, following the rhythm of our Hungarian hearts. We will not be a colony."...
The prime minister traced Hungary's freedom fight through the great revolutions of 1848 against Vienna, of 1956 against Soviet communism, and of 1989 when he played a starring role as a young student anti-communist leader.

The message was that Hungary was once more embroiled in a fight for its freedom and that Orbán was the heir to the heroes of Hungary's history. "In 1848 we said that we should tear down the walls of feudalism and we were proven right. In 1956, we said we have to crack, we have to break the wheels of communism and we were proven right," he declared.

I like the idea of being 'proven right'. Hungarians certainly fought for values such as he mentions, among others, but they lost both times. I am not sure how you can be 'proven' right under the circumstances.

We said we have to break out of the prison of debt and we also declared that Europe can only be made great again with the help of strong nations. You will see my dear friends that we will be proven right yet again.

Don't you love those 'the strong nations?'? These appeals to patriotic fervour, the sense of injustice and the flattering of national strengths are core parts of the extreme right's songbook. `he claims:

"We have with us the silently abiding Europe of many tens of millions, who still insist on national sovereignty and still believe in the Christian virtues of courage, honour, fidelity and mercy, which one day made our continent great."

And of course the values of the 'silent majority' can only be Christian. These values involve the catalogue of virtues I described in the second of my LSE posts and the clever stroke of preventing your opponents speaking by commandeering all the major public spaces on the great day. But that's the way it works: you legally close loopholes one by one and deprive your opponents of space, cash, resources and living, while working yourself into a rhetorical fury about their separateness from good 'Christian' values.

I confess it breaks my heart to see a nationalist demagogue driving my country back to the Thirties.

One might be forgiven for forgetting that the EU was an entity Hungary actually asked to join, and that Victor Orbán held the presidency of the EU less than a year ago.

What the great patriot really wants at the moment is the money the EU is withholding from him. As I wrote before, the message, the true revolutionary cry, is: Give us the money, you bastards!