Milieu and refuge: a sketch, 12 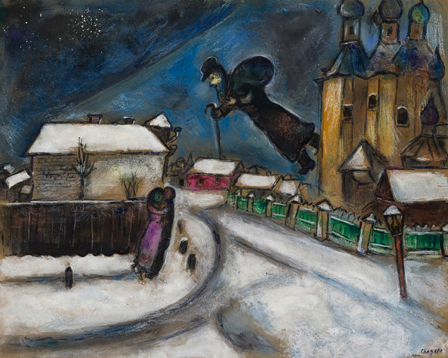 The theme of these posts, I come to realise, is the yellow room. It is not Jewishness as such, nor is it Israel, that strange fortified outhouse glimpsed across the yard. Or maybe it is Anne Frank's attic. Maybe we shall find out.

The yellow room is not the full story. It is incompletely furnished (maybe it always was and will be incomplete). If I think of it as Chagall's hut rather than a dark but modern lounge in which Jewish boys might practice the violin it may be because I find such lounges stifling. Living there would be like being trapped inside some patriatrch's beard. I distrust the patriarch. I don't like him. I shrink away from him.

I have heard the patriarch boast, tell jokes, and bully his way across perfectly good arguments. I have experienced the patriarch's arrogance, his contempt, his miserable sentimentality, his unashamed tendency to fart simply because the air was his to fill.

And I have seen him cut down like wheat before a harvester when the matriarch deployed her sharp and bitter tongue. Snick, there goes the head; swish, there goes the torso; smack, there go the legs, toppling like tree trunks, leaving only those execrable feet of smelly clay.

Sometimes I imagine the yellow room as Bruno Schulz would have seen it, as a location of comedy, awe, horror and escape.

Is this what makes the room yellow? I ask. Is this why outsiders hate it? Not because of this or that dark lounge but because of the phantasmagoria attending on it? Do I have the right to ask such questions?

And then I see one of those patriarchs in this or that famous photograph, scrubbing the street while young uniformed louts enjoy themselves at his expense.

And of course they beat him up. Then they starve him. Then they kill him along with the matriarch and all their unfortunate violin-playing children.


The floorboards in Chagall's yellow room are bare. The table is at a precarious angle. There is a samovar and three glasses, two of them empty. The three glasses are for a woman, a man and the calf. It is only right that once you invite a calf in you should offer it a proper glass. I am glad to see the glasses have saucers under them. These indicate a certain delicacy of manners. (The calf may be in the house but you don't stain the table.) The woman is modestly dressed though she has her smiling head on upside down as if to say: Of course it can be done, you just have to try harder. The man is more anonymous, slightly machine like, smaller, mechanically moving towards the door. He has his jacket on inside the house but then the door is wide open, it must be cold.

In fact there is no door. There never is. (Thank God you can't be shut inside the room). The outside is all huts and night and moon. It is a world full of Others with the full capital O. Each other is a room like this one but more fully furnished. There'll be rugs on walls, bric-a-brac, a menorah and books. Some of them will be lined with books. In some of them the patriarchs will be reading those books or totting up accounts.

The yellow room is a singing place. Human voices, stringed instruments, the wind in the open door, the mooing of the calf, the gibbering nonsense of the universe singing its patter song the way Groucho Marx sings Lydia, The Tattooed Lady. You will be asking if there is a fiddler on the roof next!.

A few years ago I was in Lodz, in Poland as part of a British Council literary visit. Before the war there were some 233,000 Jews in Lodz. About 10,000 survived the war. As part of the welcome we were taken to a Jewish restaurant lined with paintings of Jewish patriarchs, and, just inside the door above the bar,  a canopy on which sat a girl playing a violin. Home comforts.

I had no idea how to react to this. Politely, of course. It was an act of intended kindness by kind people. Psychologically, however, it was problematic. I understood it as an act of reconciliation, almost a form of apology. Whether it was also a homage to exoticisation or, since the restaurant was presumably run by Jewish owners, a piece of self-exoticisation I don't know.

Self-exoticisation is a problem in any case. Do I self-exoticise myself? Is that unavoidable? Isn't that simply a human problem, an aspect of trying to understand ourselves as others might? Trying to be more the mask that fits?

The yellow room is a problem. What did it mean to the young Chagall? To his parents inside the room? To Bella, his wife-to-be.

To Bella, perhaps, it might have seemed like a gift, a form of welcome. To her the exoticisation might have been an overflow, an act of dedication. Love. It seems like that to me. It's not where I live, I tell myself.

But then I tell myself a lot of things.

It is a duty to be sceptical about oneself, I tell myself. And so I back away from the yellow room in a properly sceptical manner. Though that doesn't mean the yellow room has stopped existing. Like the man in the painting, I head for the door to other phantasmal lives. I must tidy this up.

Not sure if it needs that much tidying up George. It makes sense to me anyway: intuitively, imagistically, lyrically, etc.

And you will probably have heard this one, but since you mention Groucho Marx and book-lined rooms: