On a poem by Tom Warner 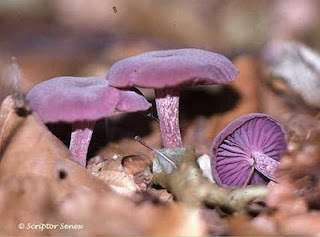 Again it is a poem read at the Millennium Library on Monday. It appears in Tom's Faber New Poets 8 collection. A longer poem, so longer notes.

every mushroom-picking pocket book I find
contains some kind of disclaimer.

Collecting mushrooms to eat is dangerous.
No field guide is ever comprehensive.

So I bought two, and slung them in a rattan basket.
The kind of basket some of the girls at school

would nurse from Home Ec. in the crook of their elbows.
The kind of girls, like Suzanne Galloway, with thick tights

who sometimes carried violins in rigid cases
for lunchtime sessions in the music block.

Once, Brett Coupe pulled the heavy doors open wide enough
for us to peer in at girls standing without their blazers,

violins trapped beneath their chins like telephones or windy babies,
and at their feet were cases filled with satin and crushed velvet.

I kick my boots clean outside and leave them at the door.
On the kitchen table I drop a basket full of mushrooms,

some red as blood, some purple and crinkly-edged
some squishy cups like orange water lilies.

I'm pretty sure thise one's an Amethyst Deceiver.
You ask me why I'd take that risk, but I can't really answer.


This is a poem that refuses to declare its hand. It is itself like the named mushroom, the Amethyst Deceiver, in that it is hard to tell whether it is dangerous or not.

The first two stanzas are matter of fact, apparently flat voiced. The first is like the beginning of a complaint or a hard-luck story. The second, in italics, reproduces a warning of which the second line hits a potential panic button: ever!

The narrative picks up from there, as an act of bravado (so, slung) then switches its attention to memory. The language is relaxed up to Home Ec but suddenly tenses. The crook of the elbow is suddenly sharp and clear. We meet Suzanne Galloway a type of girl who wears thick tights and carries a violin case. What type of girl is that? The very phrase, that type of girl, suggests something possibly sexual, but we can't be sure. The specificity of the name suggests particular importance. Those rigid cases - why would we note them? - have an air of inuendo.

But it's just school, after all. Nevertheless it is an intimidating institution where even a welcome sounds like an order. The second set of italics is as official as the first, but a little more peremptory. It's an offer in telegraphese, the language rigid as that violin case.

And then a moment of potential transgression, an act of daring like the purchasing of those potentially dangerous mushrooms. The girls - no longer just Suzanne Galloway, she has melted into an aggregation of femaleness - are without their blazers, faintly comical, faintly bizarre, and yet clearly objects of potential delectation. The boys are voyeurs. And again, one of them, the chief transgressor is named - a slightly odd non-generic name that assures the reader that it is real and that the vision matters.

And what is the vision? We are very much in the real remembered world with its odd stab of particulars, but what we are looking at is the plush inside the violin cases, that satin and crushed velvet.

Back to where we were, returning with the mushrooms. Once slung in to the basket now they are simply dropped.

And then two lines of close sensory inspection so close we can't help but compare them with the only other piece of intimate description in the poem: the insides of those violin cases. The two have something to do with each other.

Then the return to the beginning of the poem, the motif of danger. The exotic mushroom is named, and suddenly the poem engages with us. It assumes we ask something. The speaker claims not to know the answer.

The poem takes a narrative form but it is not a story about mushrooms or schoolgirls. It is the presentation of of two experiences that bear on each other. Both the open violin cases and the mushrooms are discovered in a context of warning. The school signs seem to indivate welcome but the the opening of the door still constitutes a trespass. The context of danger, defiance and transgression within an official framework (guide book / school) is the point.

Is the poem about sex? Yes, but it does no heavy breathing. It is fully controlled, and slightly diffident. This is the way things work, syas the poem, this is one way of framing the voluptuous.

It is the intelligent management of registers. Those staccato couplets that break up into still smaller units then blow out into description. The psychological pressure of the girls is felt through two images: rigid violin cases with plush interiors and potentially dangerous, exotic phallic mushrooms, that modulate into feminine forms. That in-between-gendered volutptuousness is probably the most compulsive part of the whole: Then the shrug at the end. Back to the wary flat tone. Dunno why I do it, why I see it this way, why I take the risk. But look at the mushrooms. Look at the those open violin cases. Now chance it.

Who is the deceiver then? The speaker? The mushrooms? The girls and their violin cases? The amethyst itself?

That is where the poem hesitates: it tells you what it knows and no more. The rest we must guess. Why should we take the risk of guessing? I can't really answer that one.

Thanks for the critical reading of this poem and of Esther Morgan's. The presence is burning all right.