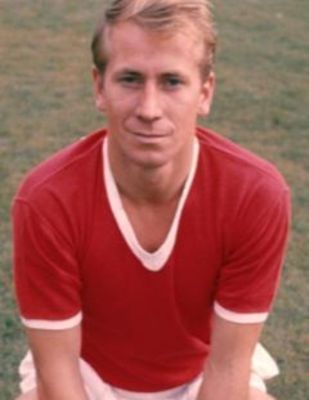 You can't help but notice you are growing. Your body changes shape, you sprout hair, you are becoming a creature alien to yourself and to your parents, to the world. No wonder teenagers love scary films full of transformations and violence. The energy is there but so is the fear and you don't know what to do with it.

I think the first time I saw Manchester United in the flesh was at Fulham when Fulham had players like Jim Langley and Johnny Haynes. Names. Names mean nothing and everything. Decades later they toll you back into some small booth of your life, the kind of booth you used to get in record shops where you could listen to the record before you bought it. They were like phone-hoods, like the kind of hairdryer you saw in women's hairdressers.  Mention a name and a face swims up at you, or a moment of movement, or a voice echoing out of an unseen space.

And now it comes back. I am very depressed by the loss. We are outside the ground and I ask my father (in English by now, Hungarian seems to have disappeared into thin air): Do you think we (gulp) will go down, dad? I am almost tearful. And he says, No.

I am consoled but my father's voice is no longer the voice of God. He can't ensure United won't go down, nor can he know that they won't. It's not in his power. His powers are limited. In fact United finish 15th and the next season is even worse: 19th. Almost down. (Manchester City and Leyton Orient go down that year.) I am squaring the tragic heroes of 1958 with the team in transition in the early Sixties. Not that I understand such terms as 'transition', not really. I understand it as danger and the hope of rescue. 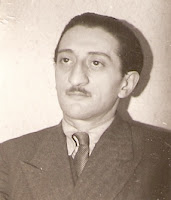 Because by now it is deep within me. What is? A sort of story. It is not exactly what theorists call a discourse because there seem to be no dimensions to the story apart from the sense of anxiety and relief you process as a story that has a beginning but seems for ever to be improvising itself into a potentially tragic pattern. Loss is not only depressing: it is a form of humiliation. The heart goes into hiding. It is not from others. Others don't care. I have no sense of what it might be like to be a Fulham supporter. They are another planet, as is everyone else. The humiliation is of the loved object, and the lover is bound to feel it as his own humiliation. It is mirrorless.

The young men on the pitch are fragments of my psyche. I have fallen in love with Bobby Charlton. It is a distant romance and perfectly satisfactory in that form. He is like an older brother I will never meet, and that too is satisfactory. He glides, he swerves, he homes in, then he unleashes. These movements are metaphors as much as events in a script. Bobby Charlton is the benign worker-gentleman aspect of the nation which is, I assume, my nation. The rest of the team is vital, but there is a core to it, an embodiment. Bobby Charlton is that embodiment.

He is also, by default, my embodiment, only with a better body. What he does is not impossible. It is not inconceivable I should be able to do such things.  That's the tangible part. I must work. I must run faster. I must glide, swerve, home in, and unleash. These are beautiful things to do. They are possible. And listen! He is a survivor of the great crash. And here he is, alive and cruising. Life can be like this.

These football posts are marvelous, George. They're like taking a deep breath, holding it back till the head goes red, and paying so the price for being transported back to one's early adolescence emotions.
I used to love football (I still do, actually; only the love is less related to a specific team these days) and so, even though 'just a girl', I recognise the thrill. Go on!

The story that is not a discourse: that has a great deal of potential. It makes me think of a friend of mine: PhD in Theology and Literature; incredibly cultured; bassist in a hardcore band—and completely unable to see the interest in any sport at all. Not just football, but also tennis (especially tennis, since we're in Roger Federer's hometown over here). I told him once that it is the story of sports that makes them interesting, but of course that didn't get his attention. But perhaps the idea that sports are a story that is not a discourse would at least be intellectually satisfying to him.

Thank you, Maria. I will go on. It is a way of recalling the years and days. And loves of course.

Andrew: I think it does turn into discourse later, if only in the sense that one becomes aware of associated thoughts and activities and of how the meanings are created. At age ten to fourteen it seemed pure story to me, a personal story, not a socialised one, or, if socialised, only in a faint ghost-like way. I didn't need the company of other United fans, not as individuals at any rate. But more thoughts on this later.

Thanks George, great memories. I've been a supporter since I read about the Munich crash. I was a schoolboy in rural Ireland then. I've only been to Old Trafford once, in 2010.

George, you are reminding me of the football cards the neighbourhood boys rushed to collect when the ice cream van heralded its arrival of an evening with its ringing bell. We bought the chewing gum instead of the ice cream for the card. I remember I was desperate to get somebody, maybe it was Dennis Violet. In the end I had to give two or three other players for him. A tough deal. Like real football business.
We could only dream about the likes of United and Liverpool and look in a football pink. It was the Linnets and Cheshire League football on a sloping pitch in Canal Street.
Enjoy your series immensely. Thank you!

Yes, I remembered you were a United supporter, Michael. Isn't it fascinating how such disasters draw certain of us - perhaps a great many - who perceive something vital and exemplary about them?

Yes, Gwilym, the sense of devotion in surrending one valuable thing for another perceived to be more vitally valuable: the ice cream for the chewing gum card, the body for the soul. Viollet was a fine player. I only saw him in his latter days. I think he went to Tony Waddington's Stoke, as a lot of older quality players did.

Again that marvellous picture of your father. Yes, Quixall to Stoke. Waddington's Stoke played in colour, or so it seemed (I grew up with b&w television, once we had a television, but the memory of that being normal has long gone).

I think this must be my favourite of all of your blog posts next to anything to do with the Marlie's Moon poems. I did my own version of it two years ago, of which the photo of Bobby I chose to go with it is clearly the best part: Bobby Charlton at the airport. But none of your beautifully calibrated fading of a father's ominiscience and power, coinciding with your team's fading. When I began with United, I'd no idea they'd ever had good days: they were a friendly side who scrapped it out with Coventry for 12th. How much easier that seems than knowing about Munich. But there was better to come for you then, and for me later.

First time I read that piece of yours James. It's gorgeous, beautifully written, precise and evocative without sentimentality. For United 1963 was cup year and the climb back to the top with Law, Best, Crerand and the rest. Others who read this should read James's piece too.