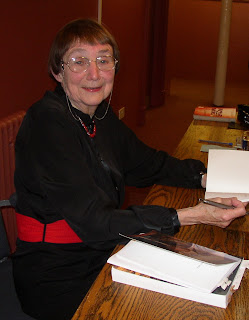 
Three London days in a row. First to the British Academy to hear Anne Stevenson with BA dinner after, sitting next to Anne on her better-hearing side. She spends her time reading books on science, geology and evolution. Far too many poets now, she says. They can't all be poets. One can't translate poetry, she says. I simply note to myself that yesterday's orthodoxies are today's heresies. I love Anne because there's no bullshit and because she is a fighter. I disagree of course, but dinner is not the place for a long discussion with a partially-hearing hero.

Clarissa and I spend the night at Tom's. Impossible not to love Tom. This is not the place to say why but we are heartbreakingly proud of him.

Next day to CLPE. Jenny meets me and introduces me to Colin who is not only a film-maker but a saxophonist. Outside they are pollarding trees so a deal has been made with the workmen for them to leave off for a certain time. Of course there are other noises: flight routes, rain, and, at one lovely point during the recording, a blackbird singing. CLPE is in an old primary school, the spaces welcoming and gentle. We talk over coffee. Jenny has chosen which poems she'd like me to read from Giants. I am seated in front of a collaborative artwork by children that includes an eagle flying off towards the top left. She is worried in case the eagle looks as though it is attached to my head, so we move slightly the other way so it is now flying from behind my right shoulder. I say a short verse I remember from my childhood in Hungary, or rather sing it as I remember it better in song form ('Volt egyszer egy kemence / Bele bujt a kis Bence...) though I have an adult Petöfi in reserve (Befordultam a koyhába /  Rágyujtottam a pipámra...) We discuss Gove and the pressure on teachers. CLPE do a lot of good work talking to teachers about teaching literature). 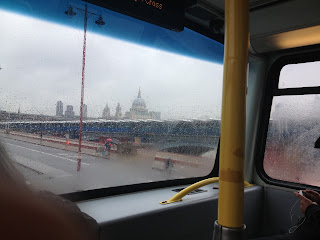 Head off in the rain, on top of 45 bus to Kings Cross, over London Bridge and look, there is St Paul's in the rain!  Meet Clarissa. We are both tired. The long train ride home.


Yesterday back to London. Clarissa drives me - she prefers to drive nowadays - to Stevenage then we get the train to Kings Cross and walk over to the South Bank from Leicester Square. The streets are crowded with Borussia Dortmund supporters in their yellow and black. I wish them well against Bayern Munich but they go on to lose as we learn after the Rozewicz.

I am not sure why they asked me to introduce the poetry since Tom Paulin is there and he knows more than I do. I have a gift - a slightly disturbing gift as far as I am concerned - of knowing just enough while appearing to know far more. However I do know just enough to talk for ten minutes more or less of the cuff, and possibly some more. There is tension in the waiting. It's the first time Stork Press have done something like this. The Purcell Room is almost full. Sophie Mayer introduces, I do the poetry summing up, then into the performance. Tom Paulin and Katy Carr read English, the famous Polish actor Jan Peszek and his equally famous singer daughter, Maria, read in Polish. In between there are film clips of Rozewicz in old age and, lastly, a great song by Katy at the piano. She has a hell of a voice, subtly modulated. Then some chat outside. The train back packed solid with cheerfully drunk and singing rugby supporters in green. Leicester Tigers. Quite a job getting off at Stevenage.

I will get back to Goodbye Fergie later today.