Knocking Liverpool off their perch was to be Alex Ferguson's task. Liverpool had occupied that perch for close on twenty-five years. Liverpool's rise was Manchester United's fall, and though United spent only one year in Division Two, and came back a rejuvenated force, there would be no disturbing Liverpool's long domination.

United went twenty-six years without winning the title. There were exciting teams now and then: the one that finished third and lost in the Cup Final to Southampton in 1976,  Names: Albiston, Buchan, Coppell, Daly, Forsyth, Brian Greenhoff (elder brother Jimmy was to come) Houston, Macari, McCreery, McIlroy, Pearson, Stepney - and Gordon Hill, the kind of self-obsessed winger United have always fallen in love with, who preferred to be known as Merlin, and who could put on the occasional magical performance, but not quite often enough. But when he was good he was very very good. Albiston was just starting a long career, Coppell was as exciting as Hill on the other wing, but more direct, less showy, the goalscorer was increasingly Stuart Pearson, a buy from Hull.

The following year Jimmy Grenhoff arrived and we won the FA Cup beating Liverpoo inthe final by a deflected Jimmy Greenhoff goal but the league position dropped to sixth, but then Tommy Doc humped the physio's wife so he had to go. There followed Dave Sexton, then Ron Atkinson, Atkinson being rather more fun than Sexton, and several years of worthy but dull attempts to finish higher than fourth. In the early eighties we managed third twice followed by fourth three times and were fourth in Atkinson's last year. Years of half-decent experiments with killer centre forwards like Garry Birtles, Peter Davenport, Frank Stapleton and Joe Jordan; one or two class midfielders like Ray Wilkins, and flying wingers like Mickey Thomas. Peter  Much the most exciting thing was the arrival Brian Robson in 1981 a proper genius who carried the team, and the introuction of Norman Whiteside, a kind of Rooney without the hair-transplant.

The Robson era deserves a post. The years until his arrival were the years of my earliest books, Faber Introduction 4, The Slant Door (1979) - which was joint winner, with Hugo Williams, of the Faber Prize)  and November and May (1981). I spent the six years, from 1975 to 1981 as head of art in a comprehensive girls' school that used to be a grammar school and still yearned to be one.

I couldn't get used to being called Sir or Mr Szirtes. I could never quite feel official and still can't. On the other hand I was actually official and had to realise that to be able to work at all. One must get used to slapping on the badge of authority on entering and the throwing it off when leaving. But it was very hard work doing so. 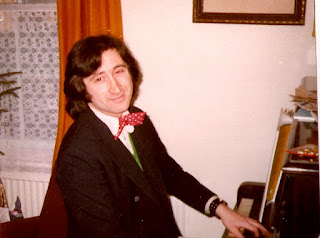 Occasionally one could put the badge aside, when for example I played kick-about football in a free period with the young German conversation teacher from whom I learned a grammatical tense I didn't know existed.

Conversation eventually turned, as it was bound to, to the 1966 World Cup Final when England's third goal bounced off the bar and over the line (if you were English) or on the line (if you were German). I frankly didn't know and couldn't tell whether the ball crossed the line or not and said as much to Wolfgang (that being his name), adding that it didn't much matter now because the referee descided it was a goal. Wolfgang's reply was: 'Yes but I do not want it to have been a goal.' It was, in its way, a perfect Teutonic construction, a declaration that the present could change the past through a triumph of the will. That is unfair, I know. Nor did I feel any less friendly to Wolfgang after that, but so much of normal conversation is forgotten and this remains absolutely clear. I can see where he is sitting in the empty corner of the staff room and where I am sitting. I remember what he looked like. I remember his voice. I remember the light. It was 1975.

My mother died in 1975, having taken her own life. Helen was born five months later. Clarissa had to go into hospital in 1978 but came out safely. My father remarried in 1977, after two years of taped converstions, tapes I later transcribed, that are of huge personal value in terms of historical moments and incidents but not precise enough for historical documentation. - I must do something with them. They weigh on me like unfinished business,

Football was a welcome distracting noise but not much more. The heart had too much else to attend to, and the aspirations of a good but never great team lurching around the fringes of glory was simply background music, a sub- or pre-punk noise of the mind, the soundtrack to a sense of things falling apart. Rising football violence was the product, it seemed to me, of ever increasing anxiety and anger, of the awareness that we were at the cliff-edge of industrial decline, of an intense inarticulate tension at the core of the social fabric. It was the inward collapse of the post-imperial sense of stability and privilege. The 'winter of discontent', when it arrived, was a vivid set of images of dirty hospital laundry, of unburied corpses, of great piles of unemptied bins, symptoms of a mad scramble towards a political moment that I didn't understand at the time. Or maybe I did understand it and that is what frightened me. I can't really tell now.

We had little money and were lucky to be living in low rent accommodation. The Slant Door appeared while the TLS was off the street because of the printers strike and was eventually covered in two sentences in an article that tried to catch up with everything much later.

When I think back now those poems of fragile domestic security, and of the minor disasters and sinister alleys of art seem to fall naturally, not only in terms of contemporary events, but in the histories that led up to them.