All my ideas about education in a single blogpost 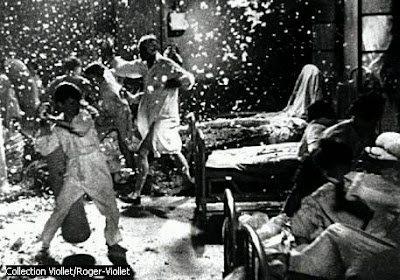 I used to do that stuff. Schoolteaching, I mean. I remember that sense of awkwardness and fear on first walking into a classroom - an art room in my case - and thinking: So now you're on stage? Do you have any lines worth speaking? Can you explain a task clearly? Can you devise a worthwhile task? And what happens if? Or if? And it did happen, and I learned some lines, and we didn't have to write up lesson plans and I remember picking up one particularly bellicose child and depositing him elsewhere. That is practically assault now. But it was OK, and sometimes it was better and, just rarely, it was worse, and most of the time most of them enjoyed it and some carried on being in touch once they had degrees and children, so really it can't have been too bad.

One of my head teachers once suggested I write a book on the teaching of art but for the life of me I couldn't take it entirely seriously. I couldn't quite take myself seriously as a teacher. I had no sense of mission. It had never been my desire to become a teacher. It was a job. But if it was a job, I thought we had better make the best of it. Do some good things, have as much fun as possible, and occasionally lose our tempers.

Teaching, as in the adverts for teachers, always seemed that much more proper, more devoted, more mad-eyed idealistic and than I thought I was. In my own eyes, I was an artist / poet who taught, and if anything was to come of anything it would have to come out of that. And it must have done because I did it for seventeen years or so, the last four part-time. I ran departments, wrote plays and scripts for musicals for performance. Some I produced, some I even acted and sang (badly) in. It could have been worse. A lot worse. I don't think I was a great school teacher, just OK, and have known much better (C is better), but sometimes I was good, and we got on. Some of it was just luck. I never worked the truly hard cases, never taught the truly murderous or utterly hopeless (meaning utterly without hope), and that is luck.

And the fact is I admire teachers, the ones who work at it, retain their imagination and independence, who face the class every day and can instill some sense of pleasure in the whole process of learning. I don't mean the careerists clambering up the ladder, the waspish, studious, shiny-faced ones. I have never liked head teachers either. They were not supposed to be liked. They sometimes became human again once they retired, but I regarded them chiefly as a form of plastic interface. But teachers, good class teachers, are a real gift and they get a bad bad deal from everyone, from inspectors, from governments, from parents.

Once upon a time they taught subjects and had a vague project to instill character, however character was defined then. The PE teacher was more likely to instill whatever it was than the art master. Then they were made responsible for a great roster of other things, healthy eating, correct sex, citizenship, while at the same jumping through horrible inhuman hoops, ever more horrible, ever more inhuman. And now they are to become narks, to report on likely eleven year-old suicide bombers. They get the blame for everything and the credit for nothing. And I'm not beefing. I don't even teach school any more. Haven't for fourteen years or more.

Oh yes, my ideas of education. Here they are. Let them go. Let the boys out at, say, thirteen. Let them be apprentices, skivvies, office boys, let them learn trades, use their hands and bodies, let them run and earn. Then, when they are hungry again, say at seventeen, let them back in and feed them heavy with knowledge and guesswork and the actual delights of learning.

Let the girls go too. A little later perhaps than boys. Let it be school out for a while. Higher education is full of people taking second chances and good luck to them. I can't speak for girls. They tend to do all right at the graft and the orderliness. But that may be simply because that is what is generally required in school now. It is not what boys are good at.

And let's not take school so deathly seriously as though it were the whole point of life. It isn't. Let's blow up the league tables, let's remove the snaffle and bit of total curriculum control. I feel quite Lawrentian (D.H.) about this. Let school have something of pleasure about it and even, if you like, irresponsibility. A little of that. Once that is achieved let's hang Gradgrind from the nearest lamppost.

Or if we can't do that, let there be just the faintest understanding that we are in this together, that it is what we would all like to do, both teacher and pupil.

Coincidence. My first effort at teaching was in an art class for children. Extra curricular. A bit of a disaster really. The poem I wrote about it is here:

...being merely a tourist in my own childhood.

Yes, that's very good. That's the first mistake we make. Though we can't properly revisit, even as tourists. Which, come to think of it, is the likely problem.

You sound like my kind of teacher, George. One of the greatest influences in my life was a teacher. I once asked him why he was a teacher. His reply was a simple one. "Because I love children." Imagine that! I bet teachers daren't say that nowadays.

You're better out of it though, nowadays. I'm an expert on teachers, or, rather, I'm an expert on how teachers have to work, nowadays. I should be. I have five grandchildren and I take them all to school each day and pick them up in the afternoon. I'm used to the, 'can I have a word, please?' Here's a couple of examples.

My youngest, a boy, just four-years-old, soiled his pants. His teacher, a lady, was not allowed to help him out of his distress. Oh no, they had to telephone his mum to go to the school. She was in Birmingham, so the next call was to dad. He was unavailable, so grandfather was called. I went to the school and cleaned him. I was bloody furious. How could they leave a baby in distress for so long? Rules and regs I'm afraid. The same rules and regs that say a playground superviser isn't allowed to pick a child up from the floor after a fall. Oh no sirree, they have to call a teacher to do it.

And then there was the time that same four-year-old was playing silly buggers. Can I have a word please? "Yes. What's he done this time?" He's been naughty again. He was putting things in his mouth and when we told him not to, he continued doing it. And, (Oh yes, there's always an 'and' with him) he won't sit still at the table when we're doing group study. "Well, did you punish him?" Yes, we made him sit on a cushion. "On a cushion! Did that stop him?" No. "I'm not surprised. You take him away from a table where he's bored, and sit him on a cushion where he's quite happy. What sort of punishment is that? I'll tell you what. He loves being outdoors. The next time he does anything wrong, wait until it's playtime and THEN sit him on a cushion. He'll soon learn!" Oh, we can't do that. We're not allowed to restrict their recreational time. "Then bloody sort it yourselves. I'm afraid I can't help you."

Yes, George, you're better off out of it, nowadays. ;)

And yes, it does get pretty crazy when a teacher is not allowed to change a small child in discomfort. If they're worried about assault they should simply have another teacher present. I think we thank the press for some of that. They're rather good at hysteria.

Your cartoon teacher looks like my old maths master Noggin the Nog. In fact nearly all our teachers looked like that. We juvenile delinquents were often beaten, but never into submission.

@poet in residence: my school also had a Noggin. Son of the eagle crest, perchance?

I've nothing to contribute in way of comment to the post beyond wild cheers, so here they are.

well that made me smile George, i must say, wish i could remember the first words,when you entered SR. still you were damn good, i remember more art history than anything else

That reminds me, Williams G. played schoolboy rugby against Rugby School.
Rushdie S. was in charge of the enemy's teapot.

Involving ourselves in education and in classrooms in our time, something should be clear to us: education = the information business. Teaching kids to navigate multiple streams of information, tell truth from fiction online and find trusted nodes and networks to work within, is an essential part of what we do. Even though I believe all these things are true.
------------
nickysam
Internet Marketing

OK, nicksam. Can you do that? Tell truth from fiction online? In newspapers? In fiction? Can the average human being, and that includes teachers?

Have we been following the tide that argued that there was no difference, that objective truth was an illusion, or at least partly an illusion? There were some rather bright people - smarter than the average teacher, smarter than me - arguing that, and while I think they were, ultimately, wrong I could see why they were arguing it.

And, ultimately, I disagree with you too. Education, to my mind is not about anything quite so crisply definable as 'streams of information'. It is offering entry to the possibilities and dimensions of the world, demonstrating the navigational tools we have (your argument) while alerting children to their limits, but also showing them the best and worst, the simplest and the most complex elements of the world of both determinable evidence and of imagination. You don't get anywhere without the latter.

Finally,I think it might be a decent task to demonstrate that all this education is a common project, one we share with them. That it is something we can do in comradeship, with mutual respect, with a recognition of the contrary. Why?

Because we are not much wiser in your terms than they are. Because those multiple streams of information as you call it, or experience as I would call it, are in fact the world, and we can spend our adult lives trying unsuccessfully to locate and define them.

That's Zero for Conduct there at the top!

(I'm visiting after a long time, puzzled by your silence, only to realise that you haven't been silent; it's the feed that's not working. Why do you suppose that is?)

Hello, Space Bar. Yes, it is indeed Zéro de Conduite by Jean Vigo, who also made one of the most beautiful films ever, L'Atalante.

I don't know why the feed isn't working. I'll check with my technical department supremo (aka as my son) once he gets back from Warsaw.