The Hungarian-born humorist George Mikes may still be remembered by those over fifty, though his name will probably be completely obscure to those under forty, unless, that is, they haunt the cheap shelves of second hand bookshops. But Mikes was a very popular author in his time, with many titles, almost all in Penguin, to his name.

This brief essay was delivered as a talk commemorating Mikes as a writer and as a reporter.

The fact is I am very tired tonight and my brain won't do anything interesting. Hence the use of the text below. 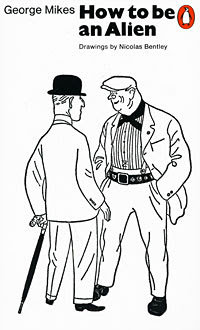 Many continentals think life is a game; the English think cricket is a game.

Continental people have sex life; the English have hot-water bottles.

The English have no soul; they have the understatement instead.


These and other one-liners by George Mikes may well be familiar to you, indeed most of them can be found on the web under headings like GEORGE MIKES QUOTATIONS. It is quite an achievement to have becomes so quotable, especially as a Hungarian writing in one's second language. As a Hungarian poet writing in his second language, I envy it. In fact I would envy it even more if I were a pure bred English poet writing in my first language. For poetry too is quotable, indeed recitable, and for much the same reason, that its structures are memorable. And why are they so? Oh, many reasons: rhythms, rhymes, epigrammatic concision, perfect encapsulations of powerful and often complex moments, the sense of revelation, the sense of something echoing in the as-yet-unarticulated depths of our souls.

The examples I have quoted are epigrams, in fact epigrams of a particular sort, the antithetical epigram. That is to say you set two halves of a sentence against each other, the second developing a perception in an unexpected direction. I don’t want to be dry and grammatical about this so I won’t be. But think of the following:

All women become like their mothers. That is their tragedy. No man does. That's his.

The man-woman opposition, naturally, is ancient. Before Wilde there was Byron:

Man's love is of man's life a part; it is a woman's whole existence.

In her first passion, a woman loves her lover, in all the others all she loves is love.

Two epigrams for the price of one there. Here we find oppositions between part and whole, but also between first and others. So we could go on, back through Pope and Shakespeare to the Greek epigrammatists and, no doubt, further. These days, when we are ultra-sensitive to stereotypes and generalisations and are constantly on the look-out for signs of prejudice we instinctively question, or quarrel with, the perceptions purveyed. Is Wilde implying that women are liars? Is Byron suggesting women are fatally limited by love? And what, for heaven’s sake, did Wilde mean by all women but no men becoming like their mothers? And is that tragic?

Such literary epigrams, antitheses, quips, aperçus – whatever you want to call them – are not falsifiable scientific propositions. That is to misunderstand literature. They need not even be true, not exactly, though we do prefer them when they have the vague scent of truth about them somewhere, however partial the truth. They are not so much about wisdom either, or not exactly: they are exercises in style. Language in the epigram, as indeed elsewhere in literature, but far beyond literature too, is not a neutral vehicle for conveying information: it is a medium that creates experience. They take us on elegant brisk journeys; they are smart ripostes. X proposes, Y disposes. They are beautifully crafted little musical instruments, exquisite jewelled needles that can do real harm. You see, even this miniature summary is beginning to take antithetical, epigrammatic form. There is nothing quite so lethal as a neat binary: Four legs good: two legs bad. Me Tarzan, you Jane.

With the epigrams of George Mikes - since we must get back to him– the opposition is between the continent on the one hand and England on the other. That at least is the way it was in his first and most popular book, How to Be An Alien, published in 1946. Actually, that is not strictly true. His first book in England was published the year before, but it’s one no one now remembers, chiefly because it was not funny, or maybe because Mikes himself did not know it was funny. It was called We Were There to Escape, and was the story of a Serbian Captain. It was, claims Mikes in his book Shakespeare and Myself (1952) one of the first so-called escape stories. Interestingly, he regarded it, he says, as “the work of a reporter and not of a writer”. “But,” he goes on, “I must have deviated from the rules of straight reporting without being aware of my deviationist tendencies.” The reviewer in the TLS praised the book – puzzlingly for Mikes - for its 'Slav humour'. It approved the book's ‘thrills and exciting adventures’ too, but was chiefly chiefly taken by its humour that lent the story, to quote, “the light touch that turns unpleasant and indeed horrifying experience into good reading”.

Mikes had not intended to be funny, so the review - he tells us - came as a surprise to him. In typical fashion – and I want to look at a few of those fashions as we go on – he explains: ‘If you can imagine Tolstoy receiving reviews after the appearance of War and Peace stating that his book was a pretty piece of fun… then you can imagine my feelings.’ Adding that, ‘After some heart-searching I was driven to the conclusion that I might as well attempt to write something, which it would not cause me painful surprise to find described as humorous.’

In typical fashion, I say. One of the key elements in Mikes’s humour – in any humour – is the sense of scale. Mikes appears to be comparing himself to Tolstoy, which is clearly a hyperbole, an act of Gargantuan vanity, but the scale of the hyperbole is so out of proportion that we are clearly aware that Mikes himself knows it. It is, we know, self-mocking irony. As T S Eliot said in Prufrock: ‘No! I am not Prince Hamlet, nor was meant to be; / Am an attendant lord, one that will do / To swell a progress, start a scene or two…’ However, there is an interesting difference: Mikes is funny; Eliot is not, or not in the same way. In Mikes the scale has conscious pomposity, the difference is implied to be greater. Mikes is not an attendant lord: as he tells us time and again, he is a bloody foreigner, an alien. That is what How To Be An Alien was about, it is how it worked.

Michael Wex does much of this in his explanations and translations of Yiddish. I'm rereading Born to Kvetch after hearing my husband's mom call one of the boys (age almost 3) a mazik. Wex is also hilarious. But his incredible gift is explaining how Jewish culture and humor are intertwined with language. I'd never sensed the link so strongly before, and never understood how it might feel to be Jewish, a permanent alien.

Thanks for that, Dana. I don't know the Wex book. I'll look out for it.