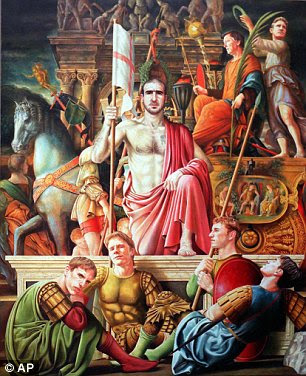 Knowing fondness for football, son T's present was two DVDs, Looking for Eric and The Damned United. I hadn't seen either of them at the cinema, so C suggested we sit down and watch them - one last night, one this afternoon.

Looking for Eric is sentimental tosh. I say that with regret because there was much to like in it and I wanted it to be good. It isn't terrible sentimental tosh, in fact it is quite decent sentimental tosh but the term 'sentimental tosh' does seem to be recurring. It sentimentalises and intantilises the working class men it wants to promote. The postmen / supporters at the core of the story are really the mechanicals from A Midsummer Night's Dream in modern terms. They all have hearts of gold, but are comically inept in their attempts to declare their souls. They have no knowledge of themselves. They are, as all true working class men are apparently, supporters of Castro and Mandela, but they are, inevitably, fat and balding with bulging castrato (beer) bellies. They are the male sex gone to seed. As for central character, postie Eric, he has never got over over his dad jabbing his finger at him at his wedding. He is a ruined man from then on. He is thin. The others are fat. Blame the patriarchy, I say.

The ladies? The ladies are quite different of course. They are 'nurturing' out of every pore of their bodies, entirely adult and lovely and idealised, and darn clever too, going to university while being single mothers. Not like the blokes, who are either thick as planks and wholly inarticulate or thoroughly bad vicious bastards. The two sons of the central character (who is clearly related not only by occupation but by appearance to Il Postino) are both wasters who come good. The males in other words are ridiculous gormless dwarves waiting to be redeemed by a word of wisdom or an act of courage from mummy/Snow White..

...but then along comes Cantona.

Cantona is interesting in this respect. He is deeply French and talks in French half the time while mumbling in English the other half. He is, however, straight-backed (very straight-backed), has no beer paunch, is proud and clever, unafraid to be enigmatic, and takes no shit from anyone. And he wears his collar turned up. When men put on the Cantona mask they become a proud class dealing blows to the evil. Men recover their self-respect when wearing the Cantona mask.

So the solution to paunch, castration, gormlessness, gun crime, panic attacks, impotence, cowardice and infantilism is to act like Cantona. A little touch of Eric in the night. Go on, you can do it. Turn your collar up, be enigmatic, keep your back straight, take no shit.

Cantona is at the centre of the painting above. There he stands for something between sainthood and military pride. He is still, in most United fans' estimation, the greatest ever. The fact that he was not above kicking opponents or treading on them, or of drop-kicking a spectator, is part of the spell of wish-fulfilment. The weak want to be strong, the conformist wants to be a rebel. In that respect Loach gets it right.

Nevertheless, there is something patronising and sentimental in Loach's film. In A Midsummer Night's Dream we know the hierarchy. In Il Postino the postman is inspired by Neruda (another foreigner). Here the Cantona model is offered far too easily to a class that is far too easily sentimentalised. And the men - all the men - are pitiful infants until they put on their Cantona masks, which only proves how infantile they really are. Unless they're Cantona they're nothing but a sentimental, impotent haze.

Oh dear.
I was so looking forward to it. They showed the trailer last week when I went to see Michael Moore's new film which I thought was a courageous piece of journalism - especially the courage shown by those who refused to budge from the closed-down factory and who re-occupied the bank-owned home. Following the film I stumbled across the interesting statistic that the bankers, who never seem to learn, were up to $2,000 in hock to every person on the planet. The image of Moore with his crime scene tape fastened across the forecourt of the Bank of America and his megaphone pronouncement 'A crime has been committed here. I have come to make a citizens-arrest,' will stay with me forever. One day the truth will out. Meanwhile the homeless and jobless, the people of New Orleans, the people of Flint, the people of Obama, will do what they can.

ps- George, before Xmas two 'experts' told me the computer was bust and I must part-exchange it for a new one. So, I went to a friend of a friend who fixed the so-called bust computer for 50 euro.
All the best to you and to C and to your Dad for 2010. And George, I never thought of your ultra-tidy system with the washing-up. I deduce that you have the clear mind of one who can understand railway station announcements. It will serve you well.
Meanwhile I go on in my darkness like a car without headlights into the unknown year.
George, I'm sure I speak for many, when I say it's been our great pleasure to savour your excellent blog and share your thoughts, visions, ideas, poems, experiences (high and low) and all the other stuff over the last 12 months. Power to your mouse!