On milieu and refuge, a sketch: 1 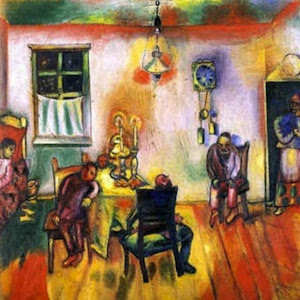 I never really thought of myself as Jewish when young. Why would I? As far as we knew, our mother was Lutheran since she said she was. Dad certainly was Jewish but - probably under her strict injunction (and her injunctions were very strict indeed) - we had no specifically Jewish life. None at all. She wanted to make sure that we, her children, would not be taken for Jews the next time, and having experienced the last-time at first hand, as had my father, she was never free of the fear that there would be a next time. She had survived two concentration camps and lost every last member of her family. She never cared for religion and her parents would, I suspect, have been reform Jews to whom Jewishness was a residual culture rather than a demanding religion.

But how could she pass herself off as Lutheran - pass herself off to us, her children, that is? Well, children tend to believe their parents, and her story was that she was a political prisoner, which was not impossible, though it became ever less probable as the years wore on. It was only after her death my father told us the truth.

We were hovering creatures, hovering between countries, languages, cultures, and religions. Having been Hungarians my parents were very willing to try being British in 1956. British they could manage: English would have been another matter, desirable, but somehow out of reach. They had very much wanted to be Hungarians but then, in the forties, Hungarians decided they weren't and couldn't be. So they hovered and remained in a curiously hovering condition.

And so it was with us as a family. At one level, we were training up to be British but at another we swam in a social and psychological half light, a version of that yellow lantern-and-candle light you find in Chagall's early paintings, generally in a cabin in a forgotten shtetl. The light that followed us around followed at a respectful distance, but it followed all the same. Perhaps - and this was only the faintest of suspicions - it was doing more than following.

I think I became aware of it in my teens. My parents' friends were mostly Jewish refugees like themselves, ever more so as time wore on, not exclusively but markedly. For my father it was one world at work and another in their social evenings which were still not Jewish but only faintly British, and not really non-Jewish.

As for me, there were a number of English Jewish children at my high school and I made close friends with one or two without quite becoming part of their communal or family life. English Jewishness seemed a perfectly amenable but slightly alien world. My girlfriends were not Jewish, nor was there any expectation that they should be. They were part of the outside British world and never quite entered the spiritual house with its faint memory of yellow-lit rooms. They were exciting but elsewhere. Then I went off to art school, first locally then in the north and the past seemed to wash off me. I liked the feeling: it was free, adult, a different spiritual milieu, an altogether better milieu I could stride through as myself.

I fell in love with C, the daughter of a Baptist missionary: we married and got baptised. It was perfectly natural. My mother attended the baptism and wrote picturesquely to a friend about how we emerged from the water like drowned rats. She loved C. She was, in many ways, delighted.

I wonder though what more she felt. The comical baptism might have seemed to her the end of her life-work in guiding her children's lives into safe harbour. (My brother was to take even further steps in joining a Christian sect a few years later.) There we both were, new born, washed not only in the blood of the Lamb but maybe, just as spectacularly, in the blood of the Mother.

Yes, but still more than this. Not yet.

Nothing is really lost, nothing escapes. The small yellow-lit Chagall-room hadn't disappeared: it remained a half-acknowledged, not entirely conscious spiritual reservoir. Early Chagalls were a great influence on my visual art precisely at the moment when the Christian faith was freshest and most persuasive. Chagall's rich colour, intimacy, fantasy and comedy seemed a credible version of what a spiritual life could be. The crucifixion took care of the suffering Christian part, embodying, as it did, the ideas of self-sacrifice and salvation. Between Chagall and Rouault, and later Giotto, (and much later Piero della Francesca) there was a habitable region, where I could assemble a self to be true to.

My mother died in 1975, taking her own life, possibly inadvertently, after several earlier attempts. Hers wasn't a religious crisis, it was a physical one for the most part - she had undergone several operations on her aorta and her mitral valve in the days when such operations were still experiments (she was a patient of Dr Magdi Yacoub, the great Egyptian specialist) and not always successful - though I now suspect a cultural-spiritual crisis too...

I want to get back round to the missing Jewish piece of the assembled self but this is only a blog and I don't want to go the long detailed way - that route remains for another time. I do however want to try to explain - to myself as much as to any reader - my feelings about Israel, a country I have never visited, based on a religion I have never practised, and a culture I have never shared.

I am perfectly aware it is not a popular cause among many in England now, among many writers, scholars, intellectuals and even friends. I differ from them on this and possibly from my reader too but I feel obliged to put forward certain reasons, or if not reasons then hypotheses as to why.

I, for one, would be most honoured if you will continue with this theme.

You may have observed, on Twitter, that I am pro-Palestinian. This is, in part, for reasons associated with the 1967 War, when it was necessary to form a human barrier between Arabs and Jews in the Student Union - Arabs and Jews who, a week earlier, had marched together in harmony at an anti-apartheid rally. It was also the first time that I ever had the history of Israel's foundation described to me from a non-Israeli perspective. And in the spiritually dark days following the Aberfan disaster, perhaps I swung too far the other way.

So I look forward to reading your thoughts.

There should be no conflict in being pro-Palestinian and pro-Israeli; there are difficult histories to be understood and reconciled and that can only be done together.

Absolutely, Plump. That at least is my own hope. But it's damn, long, hard, frustrating, bloody work