Malaysia 11: Back in KL, crowd life, the night 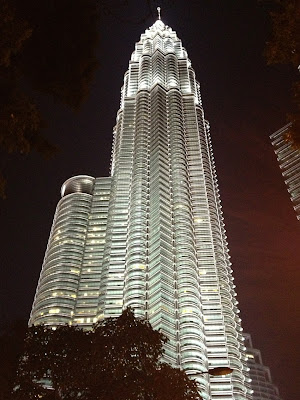 Saturday was Merdeka, Independence Day in Malaysia and we watched some of the public parade and entertainments on the TV  in our hotel room. Colourful, grandiose, full of military, and displays of dancing and speeches of course, in Malay, we glanced rather than watched. I wrote yesterday's post then we skipped breakfast and met Pauline, Eddin and Alvin in the lobby. It was a farewell. Pauline was saying goodbye to us. As mentioned before her mother has broken her knee  and she has had to rush to her mother's side to help her. We drank something at the nearby Secret Recipe eaterie then got into the car and drove with her and Eddin to the equivalent of the Heathrow Express. The fact that Pauline is extraordinarily beautiful and never makes an ungraceful movement almost distracts from her fierce intelligence and great reading. Christopher Merrill has called her 'the divine Pauline' for her ability to remain serene in whatever situation. The description is well-earned. So it was sad to see her go.

Eddin then drove us to the area where Clarissa used to live with her family in the fifties, in Hicks Road as it was called then, a hillside with old villas, some tumble-down,  some renovated, some new, some vanished, as her house seems to have done. We cruised around a little without success though we passed what had been the army school that she attended. It seemed familiar to her. The trees in the district had grown in the past fifty-six years of course. Her memory was of a more open terrain.  She remembered the road itself being flat. One day, says Clarissa, a wall collapsed on a child, killing her. The shock of it remains.

Eddin drops us by a temple in the city, a good place for walking, and went off to work on the case of his artist cousin accused of profanity by the orthodox muslims in the governing party. Today's Sunday Star has a short article Ministry withdraws controversial artwork in which the Minister of Tourism and Culture says the artwork was not submitted by the organiser to the ministry for approval. That tells you a great deal in itself about the desire to censor. If every gallery had to submit every exhibit to the ministry there would be little art apart from that which the state approved. The pressure is for self-censorship, an internalisation of the limits.


We walk around with Alvin as our guide through another busy part of the city, the streetside stalls, the cafes and eateries, the friendly jostle of commerce and culture, all interwound and well established, a plurality the narrower forms of nation-state find hard to accommodate. Think of Portobello Road blended with Southall, Brixton and Soho as it once was, the blend generally amiable, getting on with life. Rising above the streets, the big corporate buildings of the nineties and the new century. The global-international above the multifarious-local. The grand statements and monuments of the state above the constant chatter of life at ground level.

There are occasional pulses of torrential drumming rain. I love seeing the drops slam down and leap again as if striving to return to the sky making a surface of electric silver.  The buildings of the quarter range from the Dutch, Portuguese and British colonial, all engaged columns and blind arcades to that hybrid formal language in which Malayan, Indian, and Chinese meet the colonialists head on without quite resolving their differences. The grand contemporary skyscrapers are spotless, cleaned to within an inch of their lives. Street architecture disdains all that. Like the shops of the poorer quarters it is not concerned with presentation. It looks worn and part of things. It serves and that is enough.

The roads are packed, the clouds move, gather and move on. When it rains we take shelter in a grand bazaar, very different from those we had seen before. Large and aimed at tourists it is full of colour and unlike the street stalls, has a keen idea of presentation. It is also, for a tourist, rather cheap. Scarves for £2, a sarong for £2.50 and so on. We have a drink there while the rain passes then walk a little more to Merdeka Square.

After a while we tire and return to the hotel for some rest, arranging to meet downstairs at 8, eat something - duck as it happens - then go on the night town. Night life is the city life of Malaysia. It is cooler then and everyone comes out. There are street musicians, nightwalkers, stalls selling anything at all.  The press of the crowd is constant, complicated by the movement of cars trying to work a way through it. It is noisy and brilliant, the city energised into the nocturnal, like night flowers. There are spider lilies planted along the borders of the quieter streets. A cockroach scuttles across the pavement. In open massage parlours people are receiving reflexology while somewhere upstairs the sex trade goes about its business. A four piece rock band gathers a crowd on one corner. A group of youths watches, one wearing a Nazi swastika t-shirt.

We stop at an Irish pub that is only Irish in serving Guinness. There are television screens everywhere throbbing with loud music. Pop videos are intensely focused on suggestions of sex: cool commanding guys with legions of bikini-clad models thrusting their asses at the camera. A long procession of motorbikes moves past, a rally of some sort that goes on for several minutes. The riders look clean cut.  The bikes are gleaming.The drinks in the bar are hideously expensive. We sit outside and talk for half an hour or so then move on, working our way to the foot of the Petronas towers that are lit up in glass and steel. They seem to hang from the sky like monstrous chandeliers, enormous. The tallest building in the world for a few years the towers live in a world of global symbols. The expensive parts of the city are quiet.

When in crowds I am intensely aware of the physical density but it is as if I were floating a little way above the jostle in a no-man's-land of the spirit, somewhere between two worlds, the world of action and the world of dreamlike passivity. The throng is a form of uncertainty: it produces an internal deafness. At football matches I like the sense of common humanity united in its focus on a simple continually moving drama in which we have an immediate stake that is essentially realised in play. We are joined by the drama. We want the same thing, a similar resolution. There are distinct reasons that join us.

In crowds at large it is the sheer mass that produces that state of floating. All those limbs, all those solid bodies, all those smells, all those mouths and eyes, all that momentariness, all that desire for bustle itself, bustle as excitement, the life of the hive experienced as a party in which everyone is speaking at once, in which the faces of the haunted suddenly appear and vanish into the fabric of the heart.

I have put that wonderful last paragraph in my diary........

Hope they left a questioning blank space on the wall where the painting would have been.

"We stop at an Irish pub that is only Irish in serving Guinness. There are television screens everywhere throbbing with loud music. Pop videos are intensely focused on suggestions of sex: cool commanding guys with legions of bikini-clad models thrusting their asses at the camera."

I dunno, sounds awful like a lot of Irish bars I've seen (in Ireland!)...

The old Irish bars of Kuala Lump-
Are increasingly showing off rump
You go in for a Guinness
But within a few minutes
The TVs are all twerks and lovepumps.