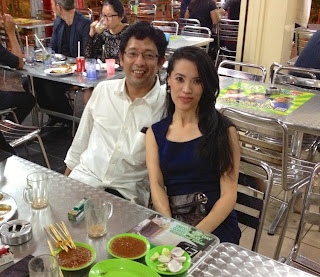 Eddin Khoo and Pauline Fan on our first day. I cannot speak too highly of Eddin and Pauline. They are luminous people. They invited us, treated us, talked deeply, intensely and passionately to us, and took us everywhere, to both remarkable places and everyday places,  including this eaterie, which, to look at, resembles almost every other eaterie, so all the eateries blend into one package of simple lighting, fan-ventilation, functional furniture, and an endless series of small dishes of greater or lesser spiciness passing across the table in rapid and infinite procession. Life with Eddin and Pauline was bound to be packed. Their cultural projects are extraordinarily demanding but they deal with it with a mixture of articulate fire and divine calm. 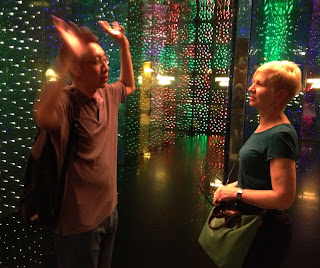 Alvin Pang with Clarissa in the passage between two hotels in KL. He appears to be surrendering to her -you can't see the gun in her other hand - but he is innocent. Alvin was very much instrumental in bringing us to Malaysia. He is a terrific poet, wise, humane, funny, deeply perceptive and knows everything that may be known to mortal. He guided us round. In cars, round tables, in streets and in lobbies we talked, talked endlessly of politics and poetry. Beside being a poet he is editor-in-chief of an important magazine on strategy and analysis. A world composed of Alvins would be a far better place, certainly saner and clearer-sighted. 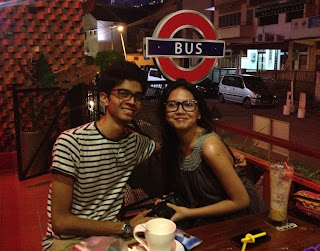 Karl Rafiq Nadzarin and Shafiqa Nabeera, aka Karl and Iqa, both lawyers, Karl qualified and heading for the Bar (chiefly the legal one), Shafiqa just in the process of qualifying. Both are involved in politics and literature, Karl as an activist for democracy, against nationalism and corruption, and Iqa as a commentator and blogger. Extremely bright people, seen here at a bar (small b) on our last day, in Ipoh. Karl also took excellent photographs and did a great deal of driving in all conditions. With some luck and much hard work they may be the future of the country. 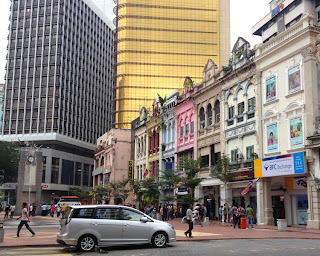 This photo gives some idea of the blend of KL without including the bustling cheaper areas around the corner. The vast corporate buildings tower over the multicoloured, small-scale colonial terrace. There is the smart car, here is the noise of several languages chatting at once (a noise you can't hear but I have on film), the shift from open fronted shop to bazaar, the magnificent hydra-headed food culture, the great loops of elevated highway that make KL seem a city built by cars for cars; the cosmopolitan buzz of it against a background of puritanical religion and nationalistic politics.  A city once mostly ground level, rough and ready, now rapidly turning itself into a playground for the rich from whichever country happens to be rich at the time. 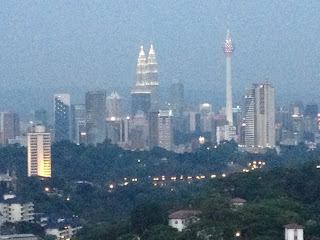 KL from a high window, like a hazy dream. Looked at from here it is a city of luminous statements that don't quite add up. The Petronas Towers just off-centre are a kind of claim in a part-European, part-Oriental architectural language. Tyrants put up such edifices. The twin towers in New York were dedicated to a different deity, but, from a certain height, the deities look hazily similar. Money towers. Power-towers. Below this window poor Nepalese guards in uniform check for security. When Becky, whom we were visiting, talks to them - and she does take the trouble to talk to them - they are all smiles. They love babies. They are poor workers near the bottom of the pile, like the Bangladeshi glazier who hung outside her window without any harness to fix the cracked glass. You don't get much lower in the social scale than that. 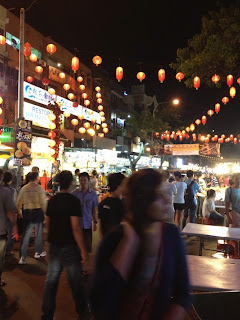 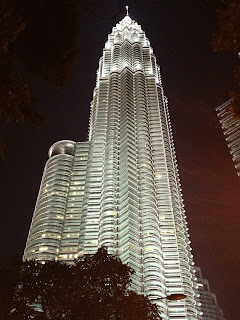 KL at night. So we are between these polarities. On the one hand the streets with their stalls, their buskers, their smells, their intimacy, their utter indifference, their blurring and crossing, their massage parlours dedicated to feet downstairs and erogenous zones upstairs, their cheap t-shirts, their sweat and rumble and horns and horniness and their need to survive into dawn. On the other, one of the Petronas Towers, those almost heavenly Christmas trees I half expect to start flashing and singing with some neon King Kong scampering up their shining ribs. We are blasted into the future where the food is delicately plain and sex is astronomically expensive. Fay Wray returns to the jungle and everyone is gobsmacked.

All this is simplification, no? But so is syntax. We simplify into language to build an alternative tower as complex as the world we started with. That's the idea anyway.

Some more photos and notes to come.