Notes on laughter, on the falling man, on old age and on a pair of wrists 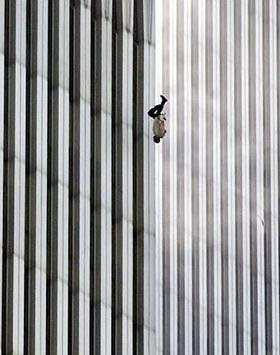 'Bergson now assumes that the comic requires the use of intelligence instead of sensibility, and he tries to determine what is the real role of intelligence in a comic situation. He takes the example of a man falling down in the street in front of passers-by. Laughter is caused by an accidental situation, caused by a movement. The source of the comic is the presence of a rigidity in life. Life is defined by Bergson a perpetual movement, it is characterized by flexibility and agility. Comic situations, such as that of a falling man, are situations where movement is not flexible.' - Wiki


Hard to know what to think. When I first think of a falling man, it is of an incident in a silent film I once saw where a fight in the street carries on down the street to where the street ends at a cliff edge. At this point one of the men hits the other so he falls all the way down the cliff. But when he reaches the bottom the fallen man immediately gets up and shakes his fist at the man who hit him. This I have long taken to be one of the major marks of comedy: relief. We would expect the falling man to die a horrible death but he does not. Fury propels the body back into life.

This is a variant of the banana skin joke. Chesterton, I think, talked of the fall of the man as an enactment of the Fall of Man, the shadow of a great loss. But the man slipping on the banana skin is not really hurt, it's just that his dignity is bruised. Wounded dignity is funnier than a broken leg, and should we ever laugh at a broken leg it would only be as an aspect of lost dignity or, as Bergson has it, rigidity. We think we are more than we are and we are punished, relatively lightly, by a fall.

But then there is another falling man, that one on 9/11, falling down the cliff-like building. The silent film was made for amusement and when the man in the film falls we are observing his fall in the context of the expectation of laughter. Death and crippling injury are in the wrong genre. Comic characters may be injured, may be bandaged up with their legs in straps and harnesses. Tom, the cartoon cat, may be sliced into several pieces or have to swallow a grand piano. We understand this as a kind of rhodomontade. The pain is vaporised or mimed away leaving only the visual puns of the evidence.

But we can't do this with the 9/11 falling man. I was indulging a wild fantasy whereby the man reaches the ground, leaps to his feet and shakes his fist at the aeroplane that had just ploughed into his building, a moment such as in the silent film in fact, man replaced by plane. I was calculating how long the man would have had to be falling and whether there would be a moment of realisation when the moment of miracle - the relief offered by comedy - passed. How long is an appropriate duration? Might we, or he, in that horrified, long, real-time of falling, have entertained any hope? In other words, is laughter as much hope as relief? This manner of laughter in any case because there is a converse laughter, that which enjoys the snuffing out of hope. That laughter on the other side of the face. 'You see! You see! We are mortal!'


Yesterday, walking into the town centre after the match I see a very old man in full Norwich City kit. He is bent over. His legs are weak. He is holding a transistor radio to his ear. It is turned up loud. He is listening to a football conversation I can't make out. It can't be a commentary as no 3pm match has started yet. I don't know what to feel about him. Is this a sad sight? He must be in his late seventies. He is alone. That is sad. Old age in itself is sad since it is close to death. And is there anyone who will mourn this old man when he goes, his Norwich City kit in the cupboard or in a heap on the floor? These are images of dereliction. And what about the dignity of an old man being a twelve-year old boy, rapt by the same childlike excitements?

But there is the other side. Maybe it is not so much a matter of dignity as decorum, and it can be heartening to see decorum defied, to be Jenny Joseph's old woman in purple, to be an old man living the life of a young boy. Maybe sadness is wasted on a very old man in football shorts. Maybe what he loves, this symbolic game, is a perfectly valid object of love. After all, my own emotions are affected by the game. I cannot see myself as him at that age, but that's partly because I never have been a kit-wearing fury of a supporter. Too meditative, too inwardly, not outwardly wrought.

But he is fascinating, as fascinating as all complex things are. I feel a certain tenderness for him, a tenderness he might not welcome, so this too is within. In any case it was good to see him.

So the wrists. She offers the menu, she serves, she chats, she points out something in a magazine. She withdraws. Both wrists are bandaged.

You might not make too much of the wrists. Maybe she wipes her brow with them and doesn't want to leave traces of oil on her forehead.

It is like opening a book then suddenly closing it. The wrists are clean, the bandage unremarkable. But there was something on the page.

So the page opens and you read a little and surmise the rest, knowing it is a surmise. Everything, including the wrists is a surmise.

One might make a mystery of such wrists. One might not think of cutting them. Between the pages, under the skin, the suggestion of blood.

The wrists in a small diner. The last customers. The kitchen packing up. The sudden flowering into chatter then shutting off, shutting down.

So, let us close the incident. It means little. People wear bandages on their wrists for reasons of their own and the diner is closing.

This stirred me to think of my mum. She was a long-time supporter of Worcester City Football Club (and Worcestershire County Cricket Club). When she died 18 months ago she was so well-known as the oldest fan of the club that she was mentioned on the paper bill-boards:

Most moving of all, the club did the honour of holding a minute's silence for her. She had a City scarf on her coffin, but she never wore the full kit!

At what point can tragedy be used for comedy? Here's a story about that:

And: Benigni's "Life Is Beautiful" was criticized for joking about tragedy.

Other than that I enjoyed 'Life is Beautiful'. The trouble was that the other wouldn't quite go away, Andrew.

Trofim, it's an interesting idea that what remains of us might be our devotion, loyalty or enthusiasm.

A woman fell on the stairs of the Vienna State Opera last night and nobody laughed. A policeman rushed to her aid and nobody laughed. The performance of Othello was sold out. The only laughter I heard was my very own when a ticket tout trying his best to flog me a €200 ticket for a seat said it was a bargain. I waited outside and saw the second half of the opera for free with a ticket from a tourist leaving early. There are not many laughs in Othello.

It should have happened at the Theatre Royal, Norwich. People would have split their sides laughing.