Field to Form: Arena / The virtual room in real space and real time 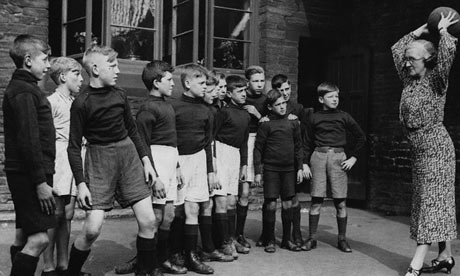 1936, Teacher Miss B. Casey coaches the boys from the football team in the school playground in Bradford, England. Photograph: Corbis Source


In earlier discussions about 'subject' in poetry, I was skirting round the idea of will, or rather, the sense of wilfulness: wilfulness in that when we have a subject, and we have 'something to say' about it, there is a temptation for the will-to-say to ride roughshod over language. This is what I want to say and now the words must do what I want. The trouble with this attitude is you get what you thought you wished for, which is not what there was to be wished for, not what there is to be discovered. What you wish for assumes something about language that is untrue and deprives it of possibilities it might otherwise have offered.

Not that I think it is possible to exercise absolute control over language, but the temptation to rein it in remains. Will renders language passive. Poems written this was may be honest, sincere, earnest and decent, but they look a little tired. Subjects can demand that of us. They insist that what we have to say about them is the most important thing.

Great poems generally do have subjects of course, but they also listen to language, listen intently, hearing it as it approaches, seizing it as it passes, trusting to it just enough to follow it at times, to let it have its head.

I want to return to the ice, to the point where we set out on it. Poetry is not like ice dancing. It is not fully choreographed. The will to write, to begin a poem, is the will to set out on the ice, not the will that dictates every move. The poet-skater feels the ice beneath his feet, senses its give, its thickness, its resistance, its amenability, and its guidance, aware of the marks of skates that have passed that way before. The temperature, the direction of the wind, the slant of light across the ice, are all internalised into what seems like instinct or is on the way to becoming instinct. It is never infallible instinct of course. There is no infallibility. Attention, intense concentration, and a certain momentum are required (each poet has his or her own best momentum). And the apprehension of fallibility despite which the poet moves and feels the dance develop.

I want to think of verse in terms of time and space: the time and space it takes to execute a turn, to come to a stop, to make a leap, to wheel right round. Space is arena. A footballer has the pitch, a dancer has the stage, the skater the pond. There are patterns that take a particular time and space to execute: haiku, tanka, sonnets, ghazals, villanelles, pantoums, ballades, sestinas, canzones, cantos of terza rima and many more patterns. All these patterns are primarily forms of time and space in which the body - the imagined body - can move. The poet builds the known space that is to be inhabited, but the material is language in movement. Time is what is possible in that space.

A sonnet is about room size. Let's build the room in air. The dimensions are given: fourteen lines within which certain other spaces offer themselves. We can learn to move our imagined bodies within this room. If necessary we can imagine a door and make another room of the same size. And then another if we like. We can furnish these rooms with whatever our imaginations sense might be appropriate at the point they meet language.

In constructing such spaces we will be aware of other such constructions existing in their own real space and time, closer or further off. All these have a magnetic power. Each exerts a force field. To write a sonnet is to understand construction as an act in a complex force field. I don't mean primarily by means of reference or quotation or a through knowledge of some specific sonnet model (the Spenserian, the Shakespearian etc). I will assume that all you need of knowledge has been internalised, so you are merely aware of the existence of others. One way or the other you have to be aware of them. It is what you learn. See all those ghost skaters moving through a space exactly like yours? They are the whispers on the ice.

It is not those who know most that write best. It is those who can sense the time and space available and find it exciting. No one has read everything. You can't read all the sonnets in the world, but you must have a sense of the sonnetness of the sonnet through reading and listening. You must sense the sonnet's spaces and possibilities. You can get that from relatively few. You can seize on their individual spaces by instinct. You understand the space then you move in it, constructing it.

Let's imagine these set forms as architecture, as virtual architecture in real space and time. The terza rima with its overlapping corridors, the mad spinning palace of the canzone...

Or just imagine a footballer, a child in the evening as the light is failing, kicking a ball against a brick wall time and again, now low, now high, trying to keep the movement flowing with first-time touches. Behind him the fence of the yard, to either side the walls of the neighbours. The boy internalising, learning instinct.

Metaphors. That's all they are. But we feel our physical way through metaphors, and the imagination, like language, is a physical thing - or at least it is becomes physical in us as we adjust to walls and time and space. We make our bodies out of language.

One more step after this.

I like this - gets better as it goes along. Some people have quite a spatial reaction to poems. There's that memory device ("method of loci?!) where you imagine walking around a house to recall a poem, and actors recall lines better if they move to them.

I think some poetry effects pan out (make you look around, give a feeling of space) whereas others zoom in. Meter for example is ambient. Anagrams make you focus on a word. Allusions make you look out of the window. End-rhymes keep the reader aware of the spatial contraints.

On this page (there are many about poetry and architecture) it says - Original work by Finch and Jacks is also on display, including Finch’s poem "About Poetry and Architecture," and Jacks’s rather cubic model of a "writer’s hut" that the architect has designed to embody the form of a sonnet. But I think a sonnet's more like a room.

We make our bodies out of language. - and v.v., e.g. Damasio's "The Feeling of What Happens"

George, Is the photo caption original? Is Miss Casey her real name? Surely not.
When I was the age of those boys we only played footy with "a casey". A football, what was that?

Tim - Neuroscience (Damasio) is probably where this could be heading some time. (I know Don Paterson is interested in it.) I don't know whether you have read some of the New Formalists on metre - Frederick Turner for example. His idea strikes me as mystifying. A neuroscience that allowed for development and adaptability, so that the kind of metrics espoused by New Formalists are not an ancient and fixed 'key to all mythologies', but a series of patterns within which the human mind and pulse learns to move and adapt, seems more promising.

And thank you for the link to the sonnet house. I wonder whether we could try something like this nearer home? Not so much with the fancy architectural add-ons, more with positioning of windows and doors and furnishing.

Gwilym - That's exactly the caption as it was at the source (indicated). I didn't know the word 'casey' for football. Thank you. How does that come about?

Is Miss Casey her real name? - No. It's Mrs Delap.

You had me going for a second there, Tim. Are you a Stoke boy by any chace?