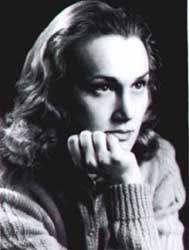 No post yesterday as we had to go down to London early and didn't get back till well past midnight having attended the Hungarian Cultural Centre launch of Ágnes Lehóczky's book, Poetry, the Geometry of the Living Substance about the great Ágnes Nemes Nagy. The book is essentially the critical part of Ági's PhD, and having been one of her supervisors, as well as one of the translators of Nemes Nagy, Ági asked me to write the Foreword. So I was part of the evening too, as was Peter Zollman who had also translated her, some fifty-one poems in a bilingual Hungarian edition.

Peter is not an unsung hero, but a hero whose triumphs might be sung louder. Since retiring from work he has undertaken the translation of great chunks of the Hungarian verse canon, most recently of the poems of György Faludy. He has got better and better as he has gone on, his command of English verse and his ear for English register constantly improving, and a lot of his work is outstanding. We come to translation from opposite ends: he from a deep immersion in Hungarian poetry learning to write English verse, I from English poetry recovering what I can of my original Hungarian, but having to learn everything anew. He firmly believes his end is better, and for all I know he may be right. Having read quite a lot of inferior Hungarian attempts at translation into English I have tended to believe the opposite though. I think Peter is an exception and deserves great credit for it.

But the evening is Ági's. She leads, and talks chiefly about Nemes Nagy's life and the nature of her work: Nemes Nagy's power, resentment, aloofness, courage and stony resolve; about that position between Rilke and Beckett that she craved. It is not a big audience but big enough with some old friends and students, and the HCC do us proud. It turns out that one member of the audience was actually taught by Nemes Nagy when she was a school teacher, and that he never knew she was a poet. She was in fact banned at the time, which was one of the chief causes of her resentment. She refused to comprise then and ever after.

Peter and I talk and read a few translations then it's off to The Maple Leaf opposite where, according to the TV screen Liverpool are beating Manchester City 3-0. That makes it a particularly good night.


Today more negotiations on the PBS future and correspondence with Mario Petrucci about Enitharmon as well as a board meeting of the Wymondham Words festival, here in the house.

thanks so much for the eve George, I really enjoyed it all and your bit even more....

see you soon, easter or may for the fest...

As an audience member (and student at UEA) I'd like to say that the talk was extremely enlightening and has further illuminated the spark of interest I already had for Nemes Nagy. Please let Agnes know that I thoroughly enjoyed myself.