More Notes towards Notes on Photography: On the edge of cliché 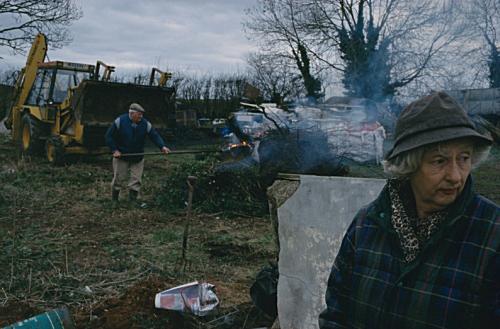 
In Justin Partyka’s work too we discover a temporal, provisional balance. The objects he photographs clearly exist. You cannot always be sure with contemporary photography now, because technology has made it possible for photographers to invent, graft, cut and rearrange. The photograph has hardly any innocence left in it, or rather the innocence must always be regarded with a certain scepticism, suspected of guilt before proven innocent. Partyka’s fields and farmyards are really there. I think we might proceed on that assumption. In that sense the photographs are reportage and memento mori, forms in front of a machine that is intended, in Isherwood’s terms, to be ‘recording, not thinking’, if only in the instant of time it takes Partyka to press the button. Crowding in on that solitary moment are the vast armies of Isherwood’s ‘thinking’ in the form of decisions regarding subject, light, angle, time and the rest.

And beyond it too, if only because thought is not quite the same as interpretation. Thought could take a decision then let it rest. Interpretation does what my mother did: make choice an aesthetic issue, an issue of style and perception, and desire. Thought is not fully conscious in these processes: the idea of the artist’s intuition or instinct suggests a realm of educated guess, a series of automatic reflexes or gambles that, with a bit of luck, continue to explore ever newer, ever deeper, ever more exotic ground. If it does not explore such ground it lapses into cliché, kitsch, ersatz, or to put it into plain English terms, a received idea, even if the idea is received by the very person who first had it. Art in this sense – and my case is that photography, however special it is or has been, by virtue of its innocence, is an art – is always at the edge of cliché.

But there is another way of putting that. We might propose that art is precisely that which lives on the edge of cliché: that the moment of rawness, the well known ‘shock of the new’, has to borrow its terms from somewhere, even if it only reverses them. Anti-art is anti-something. The marginal, as Howard Jacobson wrote in an article, is marginal to the centre. The central page-text, the art that is status quo ante, is substantial. Elements of it are following the inevitable path to ossification and cliché, but if it were entirely dead there would be no point adding marginalia or reversing it. Art is neighbour to cliché. The marginalia drift ever closer to the centre which is never dead, but has powerful electric currents playing through it. My brother and I sit in a pose that still has life or might be in the process of regaining life. The hand-colouring has thrown us into the exotic margin to which the once common central text of hand-colouring had become assigned. Texts swim in and out of each other, just as our own atoms and electrons move in and out of ambient space.